Features
Agriculture highlights of the decade

Top Crop Manager recaps some notable articles of the past decade. 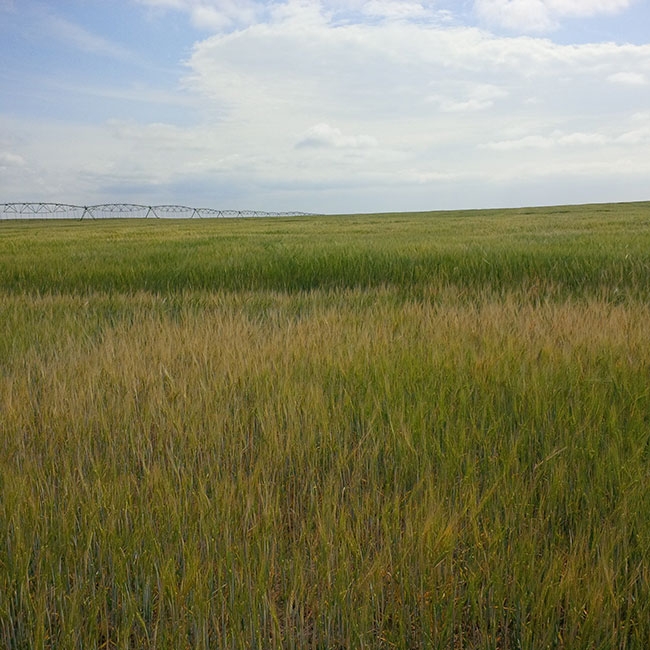 The difference in water availability (irrigation versus no irrigation) caused visible distinctions in these two areas of the same barley field. High-yielding crops require large amounts of water during the growing season.

Sometimes it really just comes down to refreshing on the basics: how do crops use water? With some areas of the Prairies seeing dry summer growing conditions, it’s worth revisiting how and when a grower should be making adjustments based on soil moisture levels.

Key takeaway: Checking your soil moisture throughout the growing season and knowing how much water your crops are using on a daily basis can be very helpful when making decisions on in-crop nitrogen, plant growth regulators or fungicide treatments. When soil moisture conditions are good and crop water use is high, additional inputs can be very economical. But when available plant soil moisture levels are rapidly being depleted and crops cannot keep up with water requirements, additional inputs would likely not be beneficial.

Herbicide resistance is a growing issue, so much so that Top Crop Manager hosted two weed summits dedicated to the topic in 2016 and 2018. Hugh Beckie, who at the time was with Agriculture and Agri-Food Canada (AAFC) Saskatoon and now serves as director of the Australian Herbicide Resistance Initiative, presented on the state of herbicide resistance in Western Canada during the 2018 Herbicide Resistance Summit. His presentation walks through the weed situation in Alberta, Saskatchewan and Manitoba.

Key takeaway: Hugh Beckie and fellow retired AAFC colleague Neil Harker, wrote an entire paper about the “Top 10 Herbicide-Resistance Management Practices” with the number practice being crop diversity. Here’s what else made the list: 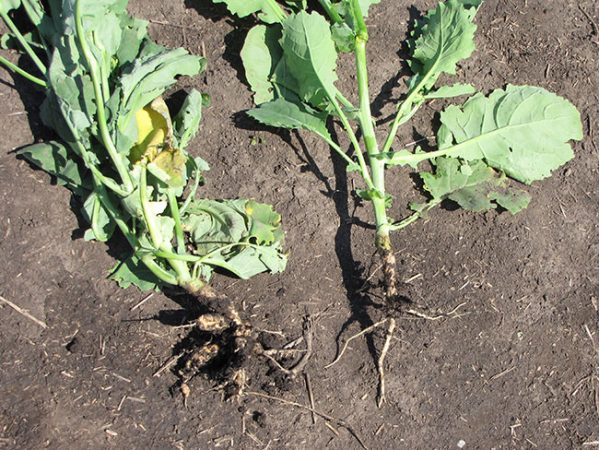 Clubroot was first discovered in canola in 2003 near Edmonton, and by 2013, surveys had confirmed a total of 1,482 infested fields in Alberta.

Prior to the 2003 discovery it had been a well known disease in Brassica crops such as vegetables. Clubroot was then found in Saskatchewan in 2008, and in Manitoba in 2012.

The first clubroot-resistant canola was made available to farmers in infected areas in 2009, but it wasn’t until 2012 that clubroot-resistant varieties really started being introduced onto the market. Clubroot-resistant varieties are one key weapon for fighting this devastating disease, however experience in other countries shows the pathogen can evolve to overcome such resistance. In April 2014, The Canola Council of Canada announced the possible erosion of some forms of clubroot resistance in current canola varieties. Two years after, 10 new variants of the clubroot pathogen were found that are each able to defeat the resistance genetics in currently available canola varieties. Despite the ever-changing nature of clubroot, most of these top 10 tips, developed at The International Clubroot Workshop held in Edmonton in 2013, still hold true.

Key takeaway: Several tips from the 2013 list include: Have a plan to manage clubroot, identify clubroot early, you can still make a difference even if your neighbour is not, use clubroot-resistant varieties and change resistance, clean (even if it’s a rough clean) equipment before moving fields, reduce tillage/soil movement, and follow clubroot management in all crops (Brassica weeds are still a host to clubroot). Since 2013, more has been discovered about clubroot. The Canola Council of Canada developed clubroot.ca as a resource for producers on controlling the disease, the latest survey maps, and research updates.

A common practice in many parts of the world, growers in Canada are beginning to see the benefits of intercrops. Many growers and organizations across Canada – from the South East Research Farm (SERF) in Redvers, Sask. to the Westman Agricultural Diversification Organization (WADO) in Manitoba – having been running trials to see how these diverse cropping systems reduce input costs, reduce risk, address pest management challenges and increase opportunities for revenue. Even older research from 2007, showed how intercrops outperform monoculture crops in terms of yield, and weed, disease and insect pest management.

Key takeaway: Start small and build from your own experience. “If producers are interested in growing chickpeas and aren’t in a chickpea area, they almost have to try an intercrop,” May says. “Just be aware that what works once in one year in one field doesn’t necessarily mean it’s going to work all the time. There’s a lot to learn before we can make concrete recommendations,” said Bill May, crop management agronomist for Agriculture and Agri-Food Canada, and investigator of one of the chickpea-flax studies. 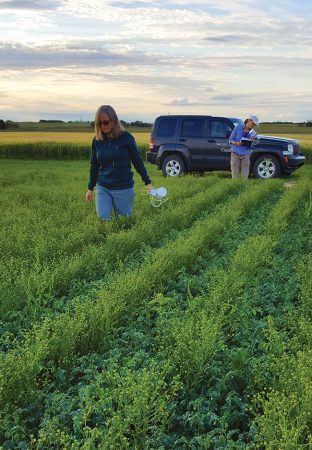 5. Soybeans: What are the best soybean rotations?

Back in 2016, as soybean production was becoming more popular in Manitoba, researchers and growers were figuring out which crop rotation option worked best for the province. In 2016, soybeans went from about 50,000 to 1,330,000 acres in Manitoba in just 15 years. In 2019, Manitoba planted 1.5 million acres – which was down 22 per cent from what the province planted in 2018. Yvonne Lawley, with the University of Manitoba, lead a soybean rotation study to figure out where soybeans fit in the province’s dominant canola-wheat rotation.

Key takeaway: The soybean yield results were mixed, but nutrient use efficiency can be a good driver for crop sequencing . “For sure, the most consistent performers for soybean yields were wheat and corn. They didn’t necessarily always result in the highest soybean yields in the experiment, but they never had the lowest. That result is also promising in that wheat-soybean and corn-soybean are good crop sequences in terms of the traditional recommendation of mixing broadleaf and grass crops in the rotation, both for disease management and herbicide rotation,” Lawley noted.

In 2019, Lawley, now a cropping systems researcher at the University, completed a study that re-evaluated the recommendations for soybean planting dates in Manitoba. The study concluded that calendar date had a greater impact on yield than soil temperature.

With the introduction of more stacked varieties, such as a glyphosate-dicamba tolerant soybean, spray drift becomes an issue if non-tolerant crops are growing near by. A temperature inversion – which results in small spray droplets remaining suspended in the air and moving off-target – happens on the Prairies. Most farmers have directly observed the signs of an inversion. Dust or smoke may rise slowly and hang in the air, often slowly drifting away at the same level, or strong odours or distant sounds that aren’t normally observed are also indicative of an inversion. Even with low drift nozzles, spraying is not recommended during an inversion.

Key takeaway: Early morning shortly after sunrise when skies are clear and wind is low is usually one of the worst times to spray. “A good rule of thumb for inversions is to wait a couple hours after sunrise before spraying to allow the inversion cap to disperse,” Tom Wolf, a sprayer technology specialist with Agrimetrix Research and Training in Saskatoon, said. 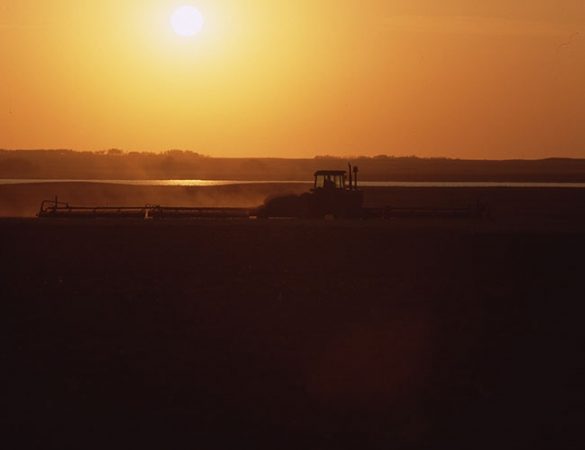 7. Micronutrients: What’s up with boron?

Sometimes there is a lot of value derived from paying attention to micronutrient deficiencies – but what are the circumstances needed to make a boron treatment in a canola fertility program worth it? This article goes through all the research available when it was published in 2018 and concludes: foliar boron response is still unpredictable. However, the research notes that “boron deficiencies in Prairie soils are rare, but can occur on sandy soils where water-soluble boron is subject to leaching.”

Key takeaway: “On irrigated soils, Gary Kruger [irrigation agrologist with the Saskatchewan Ministry of Agriculture] cautions growers against applying boron to every canola crop they grow because of the possibility of toxic accumulations of boron in the soil. If growers feel they are deficient in boron, he proposes that canola growers consider applying foliar boron to canola once every five to 10 years to avoid the risk of toxicity.”

8. New chemistries: Dicamba for control in glyphosate- and dicamba-resistant soybean

With the introduction of Monsanto’s (now Bayer) glyphosate- and dicamba-resistant soybean into the Canadian market in 2017, producers may be wondering if there is any benefit to tank-mixing the two herbicides for weed control. Researchers from the University of Guelph worked with several agricultural products companies to conduct six field trials at three locations in southwestern Ontario in 2014 and 2015.

Key takeaway: The strategic and judicious use of dicamba has a place for weed management in soybean.

For the last half of the decade, Western Canada has seen wet harvests. For some producers, 2016 and 2018 were some of the wettest harvests they’ve seen in years. So what does this mean for how an operation can evolve to make sure it can adapt to these conditions? Is it just a wet spell or a sign of something larger? In many ways it’s impossible to plan for a wet harvest, because nobody knows exactly what conditions Mother Nature will send year-to-year. But there are a few ways producers can plan for the worst and maximize their profit potential no matter what comes.

Key takeaway: Producers have to understand their equipment so they can successfully harvest as much of the crop as possible – and maintain its quality once it’s in the bins. Producers can dry grain by using aeration or natural air drying in the bin, adding supplemental heating to improve drying capacity of the air. They can also purchase grain dryers, which quickly heat grain to dry it and then cool the grain down prior to storage. There are unique benefits to each of these systems dependent on what the operation needs.

Hand in hand with wet harvests comes the need to dry grain. This 2018 article follows an Indian Head Agricultural Research Foundation (IHARF) project that wanted to see if there were better, more efficient ways to be drying grain. What they found was that there’s a “diurnal” drying cycle, which is when drying takes place at night and quite commonly wetting occurs during the day. This occurs regardless of size of bin or type of grain in the bin.

“What we learned is that we can take advantage of this drying cycle and turn the fans on when drying is occurring, and turn them off when conditions are causing condensation or wetting,” Ron Palmer, IHARF research engineer, says. “The data shows that the most drying appears to be occurring at night during the colder outside temperatures around 2 a.m., whereas the most wetting occurs during hottest part of the day at about 2 p.m. Temperature and relative humidity are key factors in whether or not drying conditions are in place, or if condensation is occurring.”

Key takeaway: Palmer created a simple online calculator that helps make drying decisions easier. The only inputs needed are the air temperature, and the temperature and moisture content of the grain; the calculator will determine the extent of the drying conditions. (planetcalc.com/4959/)

This list is not a comprehensive list. There are many more notable topics that could’ve made the list: new grain bin monitoring tools, the rise of straight-cutting canola, insect pest management strategies that take into account beneficials, etc. If there is an article that wasn’t mentioned but has been notable to you – feel free to share it in the comments below!