Reduced disease pressure is just one benefit of intercropping, but research has just begun. 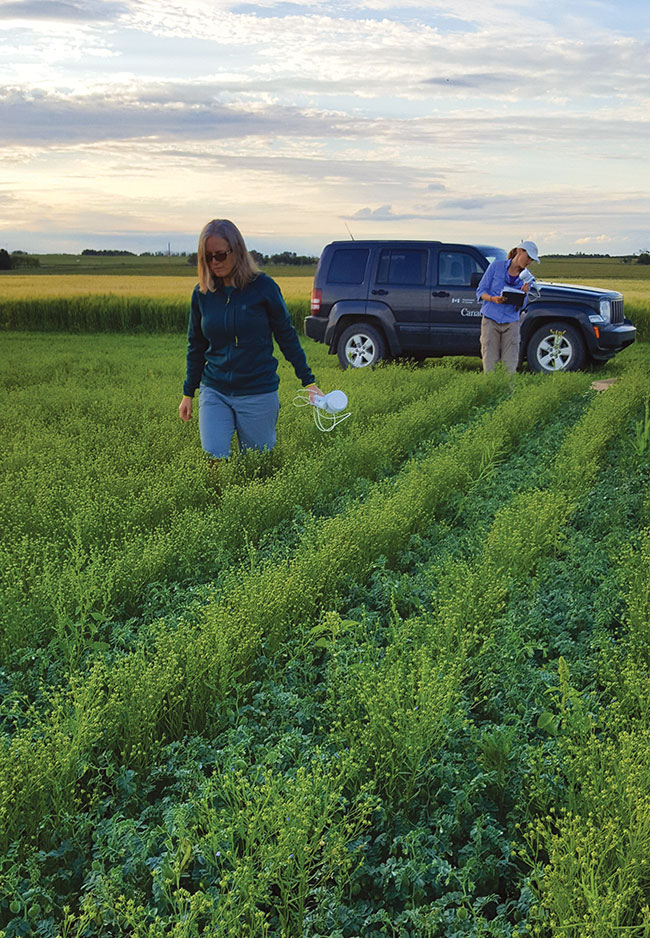 But those figures don’t tell the whole story. Shaw herself has recorded a total of 6,460 acres of intercrop in 2018, based on direct contact with producers. Some of these acres are known to SCIC, says Shaw, but at least a couple thousand of these producers are not customers of SCIC and wouldn’t be in their database.

“The total for Western Canada is likely around 8,000 acres of production when uninsured acres and Alberta and Manitoba are included,” she says.

What this means is that intercropping is increasingly practiced by producers in Western Canada, but the industry is still catching up in terms of agronomic resources and research.

Shaw is part of a team hoping to change that.

Replicated trials on intercropping chickpeas and flax ran at the South East Research Farm between 2013 and 2018. The same trials were done at Indian Head Research Station from 2014 to 2018, and a scaled-down version of the trials ran at Swift Current in 2018 (Saskatchewan Pulse Growers funded trials between 2016 and 2017). In 2017 they began to examine the effect of crop placement, flax seeding rate and nitrogen rate on development and yield of both crops.

According to Bill May, crop management agronomist for Agriculture and Agri-Food Canada and the principle investigator of this study, the trials were fueled by three big questions.

“Can we manage chickpeas to expand geographic area by applying drought stress? Can we manage them better in adapted areas if we can impact disease development? And can we move flax into areas where flax isn’t currently grown or economical on its own by intercropping it with chickpeas?” May asks.

“We’re also asking whether we can increase the overall income per acre because we’re getting some flax off the field as well as chickpeas,” he adds. “Maybe that’ll change as you move into wet areas – the chickpeas will be a second crop and flax will be primary. We don’t know yet.”

Data hasn’t yet been analyzed for the years of the study, but May hopes to release that information soon. So far, the flax seeding rate has had the biggest impact of the three agronomic practices.

In the meantime, May’s team has applied for Agriculture Development Fund (ADF) project funding to expand the study for another three years so they can bring in more researchers to expand the Swift Current site and add sites in Melfort and Saskatoon to the study. These sites would bring a valuable angle to the study: they didn’t get enough rain at the southern sites in 2017 and 2018, but even if those sites don’t get rain during the next three years, Melfort very likely will.

Study questions
Rainfall levels are a key consideration for whether producers can grow chickpeas, May says.

Chickpeas have a characteristic known as “an indeterminate growth habit,” meaning if they get too much rain at the end of the growing season they may fail to mature and fill seeds. This is one reason why chickpeas aren’t typically grown outside drier regions even though they’re a high value crop.

“In a normal wet year at Indian Head, we typically can’t get seed set,” May says. “This got me thinking – if we grow flax with chickpeas, and apply some stress to the crop by drying out the top two feet of soil with the flax, maybe the chickpeas can fill the seed.”

At the Indian Head and Redvers sites, researchers compared alternate rows with mixed rows, with and without nitrogen, with four different seeding rates of flax, plus a monocrop control with a flax and a chickpea, for a total of 21 different treatment comparisons with four replications. The Swift Current site was smaller, with paired rows instead of alternating rows, randomized separately from the mixed rows due to equipment constraints. There were only three flax seeding rates and no application of nitrogen fertilizer, besides what was presenting the phosphorous, in Swift Current.

At Indian Head, May says alternate rows seemed to perform better than mixed rows, while at Redvers, mixed rows may have a slight advantage. Flax seeding rate has a big impact on chickpea performance, with higher seeding rates negatively impacting chickpeas. Added N tended to boost flax while hurting chickpea yield. Beyond these preliminary observations, much more data is needed before researchers can make specific recommendations for seeding rate and N.

“We’re just at the beginning of this, but we know that flax seeding rate is a big driver,” May says. “I expect that the wetter your general conditions, the higher the flax rate will be.”

Disease
While rainfall is an important check for producers considering growing chickpeas, it isn’t the only one. Monocropped chickpea is highly susceptible to disease, especially ascochyta blight, which is caused by the fungus Ascochyta rabiei.

Michelle Hubbard is a pulse pathologist at the Swift Current Research and Development Centre, who brought her expertise in disease management to the study in 2018. 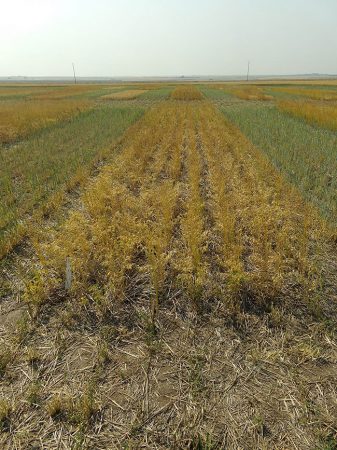 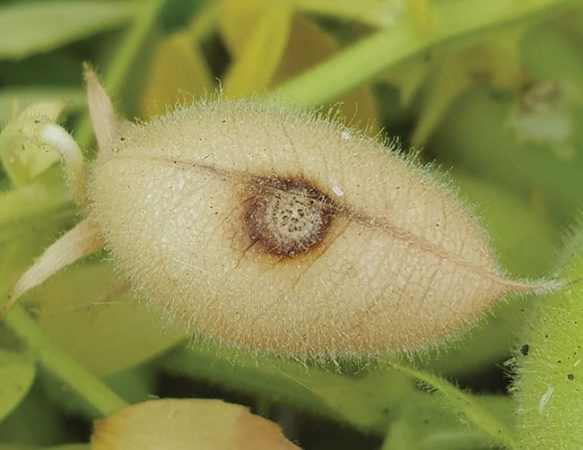 An ascochyta lesion on a chickpea pod at Redvers in August 2018. Photo courtesy of Lana Shaw.

She says that, without treatment, ascochyta blight can devastate chickpea production, and though the disease is traditionally managed with fungicides, they’re expensive – and resistance is on the rise.

“I’m in the process of doing a survey on strobilurin (Group 11) fungicide resistance in chickpea, and in every site, the ascochyta has been resistant to strobilurin fungicides. This emphasizes the need for other control mechanisms,” Hubbard says.

While data isn’t yet finalized from the chickpea/flax trial, she says the results have been promising so far.

“This past year we looked for disease in all three sites and in Indian Head, when we did a rating in early September, there was virtually no disease,” she says. “In Swift Current there was very little disease and the severity was really low, so it wasn’t different between intercrop and monocrop, but when you looked at the incidence – pods with lesions versus clean pods – the monocrop chickpeas had more pods with disease.”

In Redvers, disease levels were moderate but severity was higher in the monocropped than in the intercropped plots, Hubbard says.

“Regardless of whether you use mixed or alternating rows, it’s worth investigating whether the use of intercrops is consistently able to lower disease in chickpea, and whether that could lead to less need for fungicide,” she says.

Increased diversity
Shawn Catherwood planted a chickpea-flax intercrop on 50 acres for the first time in 2018 on his Ceylon, Sask. operation.

Last spring, Catherwood graduated from the University of Saskatchewan with an agronomy degree. He found that there was very little emphasis on soil biology and regenerative agriculture in his program. Back home, he opted to try intercropping on a small scale on his family’s 3,500-acre operation.

“I farm with my father and uncle. They weren’t against the idea of intercropping, but maybe a bit skeptical,” Catherwood says. “Everyone was surprised – the outcome was awesome, so it kind of proved that this can work. My target yield for chickpea was 1,800 lbs/ac, and my yield goal for flax was eight bushels per acre (bu/ac). I wanted to get about 35 to 38 bu/ac gross. I got about 26 bu/ac gross –19 bushels of chickpea and seven to eight bushels of flax,” he says.

The results were better than Catherwood had hoped considering the fairly dry year.

He says the number one reason he’s interested in intercropping is profitability –growing two high-value crops together using fewer inputs overall. The first year was tough, Catherwood says, because he had to buy chickpea seed, but now that he has seed, costs will go down.

But other costs were offset. Ascochyta blight presents a big expense to producers in the form of multiple fungicide applications.

“Growing chickpeas on their own is a battle with ascochyta. My neighbours pencil in three to four applications a year no matter whether it’s dry or wet. This year, some of my neighbours sprayed three times on their chickpeas,” he says.

Catherwood limited himself to spraying twice, but a check strip proved the second application was unnecessary. “There was zero disease on the check strip,” he says. “I guess it was a good thing, because now I have more confidence going forward.”

For Catherwood, the benefits of intercropping are not only economical.

“One of the things I’m trying to do is increase diversity on the farm. A perfect way to do that is to plant two crops at once. It’s increasing diversity both spatially and in time. You’re getting more diversity in each year of the rotation with the intercrops,” he says.

Catherwood says that while farmers can learn from each other and Lana Shaw’s work at the South East Research Farm, there are very few official resources for producers interested in intercropping, so new research is more than welcome.

In the meantime, he and many other growers are starting small and building their own experience – which is exactly what Bill May recommends.

“If producers are interested in growing chickpeas and aren’t in a chickpea area, they almost have to try an intercrop,” May says. “Just be aware that what works once in one year in one field doesn’t necessarily mean it’s going to work all the time. There’s a lot to learn before we can make concrete recommendations.”