One of the first research questions was to determine what we expected aeration to do and what the main objectives were,” says Ron Palmer, IHARF research engineer. “The first reason was to remove some of the moisture from the grain, especially if it is tough. 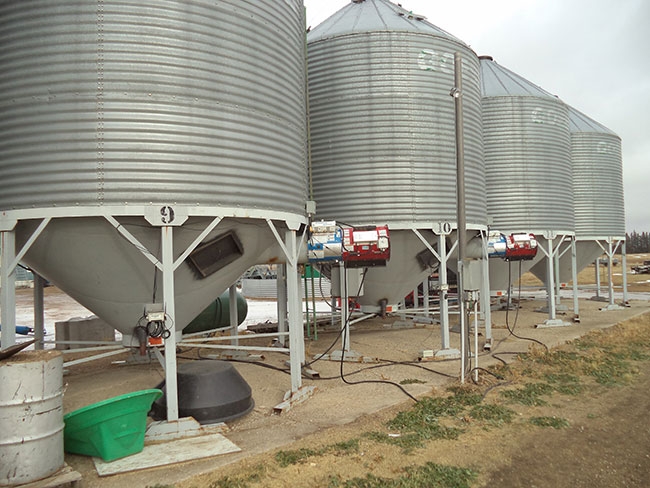 Grain bins with an automatic controller system installed for natural air drying. One of the first research questions was to determine what we expected aeration to do

Secondly, and more importantly, was to minimize spoilage, which is driven by the moisture content of the grain and its heat. Spoilage begins as soon as the grain is harvested. We also wanted to determine if there was a better way to dry the grain by controlling the fans to only run if there were drying conditions, instead of the more popular strategy of letting the fans run continuously.”

After compiling many years of experimental data, it was discovered that there is a “diurnal” drying cycle, which is when drying takes place at night and quite commonly wetting occurs during the day. This occurs regardless of size of bin or type of grain in the bin. “What we learned is that we can take advantage of this drying cycle and turn the fans on when drying is occurring, and turn them off when conditions are causing condensation or wetting,” Palmer says. “The data shows that the most drying appears to be occurring at night during the colder outside temperatures around 2 a.m., whereas the most wetting occurs during hottest part of the day at about 2 p.m. Temperature and relative humidity are key factors in whether or not drying conditions are in place, or if condensation is occurring.”

Understanding the drying process is based on well-established science, equilibrium moisture content (EMC) equations and math calculations, but Palmer has developed a simple online calculator to help make drying decisions easier. The only inputs needed are the air temperature, and the temperature and moisture content of the grain; the calculator will determine the extent of the drying conditions. (planetcalc.com/4959/)

“There are a few takeaways from this project, most notably that this system of natural air drying can only take a couple of points of moisture out of the grain,” Palmer explains. “A good rule of thumb is that for every 15 C that the grain is cooled down through aeration, one point of water or one per cent moisture is removed. The most critical step is to start aeration immediately on the day the grain is put into the bin, even if it isn’t full. Don’t put it off until later – start the process right away and take advantage of the immediate drying opportunity. We found that the first 24 hours is where we took out the most moisture, typically taking out one point of moisture in 24 hours, cooling the grain down from 30 C to 15 C. In all cases, the fan should be turned on when filling and left running until 9 a.m. the next day to cool the grain, even if it is dry. In this system, we are using the inherent latent heat in the grain for drying, rather than heated air.”

Air temperature is the main reason more drying occurs at night, because cold air can’t hold water. When the cold night air enters the bin and passes through the warmer grain, the warmer air exiting the bin holds more water and drying occurs. However, with the hotter outside temperatures during the day, the warm air entering the bin hits the cold grain, and the colder air exiting the bin can’t hold water, condenses and wets down the grain. Therefore, running the fans during the cold nights will dry the grain and remove moisture, while running during the hottest part of the day increases the risk of actually adding moisture back into the grain and increasing the risk of spoilage. This also explains the crusting that can occur at the top of the bin. The crust forms from the warmer air condensing on the inside of a cold roof and raining back down on the grain. The calculator can also be used to determine when such conditions exist.

“We’ve taken the research and calculator to the next step and developed a system that automatically controls the drying process; only turning the fans on when drying is occurring and turning them off when it is not,” Palmer adds. “In collaboration with IntraGrain Technologies Inc. in Regina, Sask., we have implemented an automatic controller using the absolute humidity of the air entering and leaving the bin. In one experiment, we tested the automatic controller in a 20,000-bushel bin of peas and a 10 horsepower fan. We had drying conditions throughout most of this experiment, with the fans running between 63 and 75 per cent of the time. We also learned that smaller fans are better, not only saving energy, but they also reduce air pressure and heat at the bottom of the bin, which results in more even drying. The optimum fan size for aerating grain is about 0.4 cubic feet of air per minute (cfm)/bushel.”

Palmer agrees with critics that say aeration or natural air drying can only dry grain down by a couple of points. In situations where grain needs to be dried down three or four points or more, then supplemental heat will be needed or a commercial dryer. “We did some research this summer using the same principles of only running the heaters and fans when needed, rather than continuously. Burners only need to be sized at 50,000 or 100,000 BTUs and run during the heat of the day to put the energy and heat back into the grain. Then turn the aeration fans on during the coldest part of the night to cool it down and dry the grain. For example, in a 3,500-bushel bin, a 50,000 BTU burner can heat up the grain by 10 or 15 C during the day, and the fans can lower the temperature by 15 C overnight, reducing the grain moisture by one point. Repeat this process until the grain is dry. Depending on the situation, you can pick and choose the best days to do this, and it may be worthwhile to remove a load from the bin improve drying from the bottom.”

The research results show that using aeration and natural air grain drying properly can help growers achieve their goals of dry, high quality grain and minimal risk of spoilage in storage. Using the heat in the grain itself can help evaporate water from the grain without requiring supplemental heat if only a couple of points of drying are required. Running the fans only when drying is occurring reduces electrical costs and maintenance, and improves drying and storage outcomes.