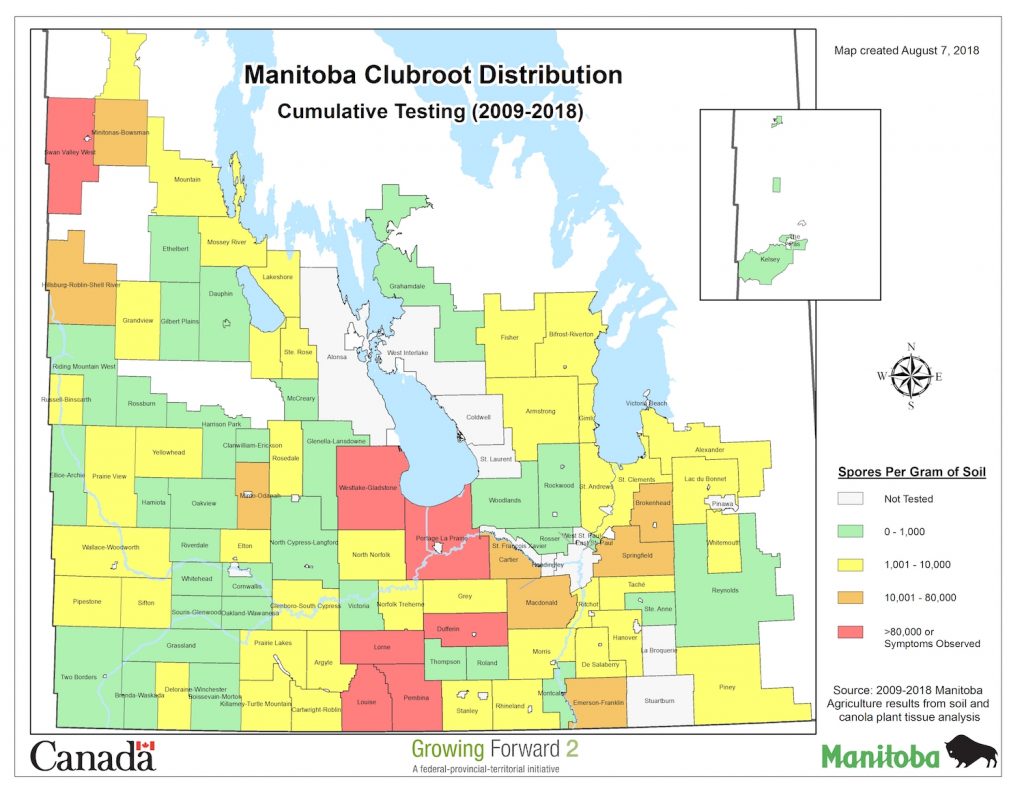 A new strain of clubroot has been identified in the RM of Pembina, labelled red on the map near the U.S. border. Map courtesy of Manitoba Agriculture.

Manitoba Agriculture reported a new strain of clubroot of canola (Plasmodiophora brassicae) was positively identified in the Rural Municipality of Pembina, which is located in southern Manitoba near the United States border.

Outside of Alberta, very few fields have been found to contain novel pathotypes like the one identified, and this is the first finding in Manitoba, according to a backgrounder by the Canola Council of Canada (CCC).

“This is yet another cue for the industry to continue to take this disease seriously and implement clubroot management plans,” said Dan Orchard, agronomy specialist with the Canola Council of Canada, in response to the announcement. “We still have an opportunity to get ahead of this disease and limit the impact it has on canola producers and the industry.”

All canola producers are encouraged to grow clubroot resistant varieties, limit the movement of soil, extend rotations to at least a two-year break between canola crops, control canola volunteers and other brassica hosts, and diligently scout.

Symptoms of the disease are most noticeable late in the season, and can still be seen during and after harvest on plant roots. Producers are strongly encouraged to familiarize themselves with clubroot symptoms and start scouting this fall, CCC urges.

Clubroot is a disease of canola and other brassica species that inhibits the function of plant roots to take up water and nutrients from the soil. Infected plants suffer premature ripening, significantly reduced yield and/or early plant death under moderate to severe levels of infestation. Clubroot is a soil-borne disease, and can be transferred from field to field on soil particles. Soil movement can be on footwear, vehicle tires, farm machinery, custom equipment, or via wind or water movement across a landscape.

The new strain of clubroot is identified as pathotype 3A, using the combined designation of the Canadian Clubroot Differential Set (2018) and the Williams set (1966).

Pathotype 3A is able to overcome some first-generation sources of genetic resistance in commercial canola cultivars. Traditionally rated “resistant” or “R” canola varieties will not be effective in preventing clubroot infection against this pathotype strain. Traditionally R-rated varieties are tested against pathotypes 2, 3, 5, 6, and 8 of the Williams set, and not labelled as effective against breaking-resistance pathotypes of 3A and 5X.

Traditionally rated “resistant” or “R” canola varieties will not be effective in preventing clubroot infection against this pathotype strain.

Resistance to the new strain in canola

Genetic resistance to pathotype 3A can be found in a small number of commercially-available canola varieties specifically labelled for resistance to 3A. However, long-term sustainability of canola production requires effective crop rotation and rotation of sources of genetic resistance, together with good farm biosecurity to suppress clubroot infection.

The Canola Council is working with industry and academics through the Clubroot Steering Committee to ensure that clubroot resistant varieties are used effectively in a clubroot management plan. Even when implementing resistant varieties, growers need to carefully scout to ensure the resistance deployed is effective against the pathotypes in the field and determine whether new sources of resistance are necessary. Under high resting spore loads, symptoms can occur after using the same resistance source two or three times, or even sooner.

“It is critically important to limit the pressure we put on resistance by using resistant varieties before spore concentrations are high, extending the break between canola crops and changing up resistance sources if necessary,” said Orchard.

A Clubroot distribution in Manitoba can be found online. If producers are concerned about clubroot on their farm, the Plant Surveillance Initiative Lab (PSI Lab) in Winnipeg can test soil samples and provide information on if clubroot is present. The Canola Council of Canada also has a number of resources available including a clubroot management video, Clubroot.ca – a comprehensive website about clubroot, and a brochure about understanding clubroot resistance.