Research shows that calendar date has a greater impact on yield than soil temperature. 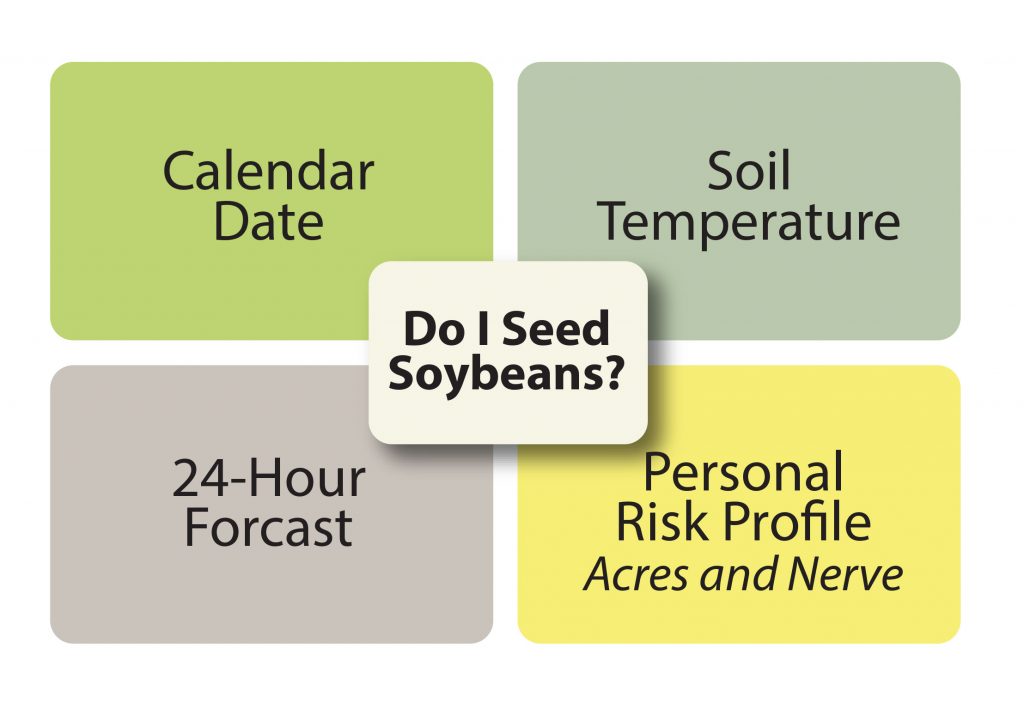 Contrary to expectations, they found that beans seeded earlier saw higher yields regardless of soil temperature. They concluded that calendar date had a greater impact on yield than soil temperature.

These results challenged an old paradigm: beans are traditionally seeded when soils reach about 10 C, which typically happens around the end of May. Not that recommendations have changed radically: Tkachuk, who now works as a production specialist for Manitoba Pulse and Soybean Growers, says producers are still encouraged to take soil temperature into consideration.

“It’s called the time-of-seeding compromise,” Tkachuk says. “Producers should consider all of these factors when determining planting date: calendar date, soil temperature, weather and personal risk. How many soybean acres are you putting in relative to other crops? If you have a lot of acres, you might want to start early and spread out the planting dates. But don’t put all the acres in early if you have other crops to plant or a high risk of frost.”

A new study at University of Manitoba will shed more light on this subject. Kristen MacMillan is an applied soybean and pulse research agronomist in the department of plant science. In 2017, she began a two-year study funded by Manitoba Pulse and Soybean Growers that will build on Tkachuk’s work.

“Instead of soil temperatures, we defined seeding windows based on calendar dates and we seed soybeans within these windows at all sites regardless of soil temperature,” MacMillan explains. “The aim is to further refine seeding date recommendations across a wider range of environments.” 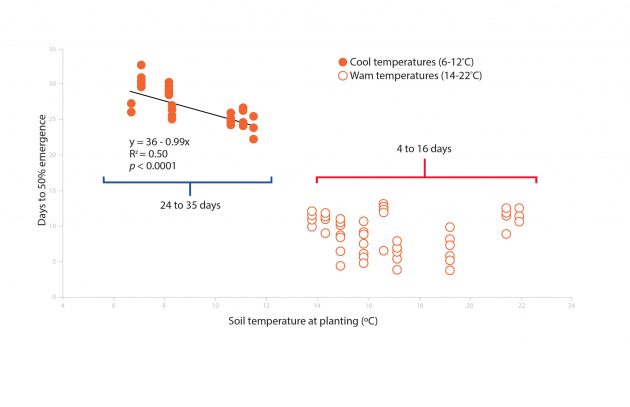 The relationship between days to 50 per cent emergence and soil temperature for three combined site years in Cassandra Tkachuk’s study.
Source: Tkachuk, C. 2017. Evaluation of soybean planting dates and plant densities in the northern growing regions of the Northern Great Plains. M.Sc. Thesis. University of Manitoba.

“The initial work was done in Carman and Morden, which are located in the long season area of Manitoba, so in order for us to have more confidence in seeding date recommendations we wanted to expand outside that traditional soybean growing region,” MacMillan explains.

MacMillan says the study was originally planned to run for two years, concluding in 2018, but very dry conditions over both years of the study have prompted her to consider adding a third year in hopes of more “normal” conditions in 2019.

Data from 2018 hasn’t yet been analyzed, but 2017 results show that the first three seeding dates had a statistically similar yield, which suggests that while there was no penalty or advantage to early seeding, there is a longer window for seeding soybeans than was originally expected.

“We didn’t see an advantage to the earliest seeding date, but we’ll see if that trend continues in 2018. We did see a 15 to 20 per cent yield drop with that late season seeding date, when we seeded in the last few days of May and into June,” she says.

According to MacMillan, the original study was prompted by farmers’ experience; they were already moving toward earlier seeding with some success. She hopes to gain a better understanding of whether and how soybean yield responds to seeding date and if that response is consistent across environments.

“For now, if farmers are seeding earlier, I would remind them to know what their last spring frost date is, and stay within two weeks of that date,” she says. “You want to make sure the crop is not at risk of frost when it comes up.”

Lawley says that though there are tradeoffs in terms of slower emergence, seeding earlier in the year helps spread out planting dates.

“What I think will happen in the Red River Valley is that we’ll see more problems with root rots and early season soil borne diseases in time, so stand establishment may become more important for us. But at this point the biggest constraint on us is the length of the growing season,” she says.

“Ultimately it’s a strategy – you don’t want to plant everything to one variety on one day, you want to takes steps to plant over a range of dates,” she says.

There are other strategies producers can use to get soybeans in the ground earlier.

Lawley points to her work with residue management using strip tillage before seeding soybeans to highlight the fact that there are ways of providing soil cover that help warm soils up earlier in the year. “This is a complicated story but the simple part is that we can manage residue to influence soil temperature,” she says.