Understanding the science and economics of companion crops and living systems. 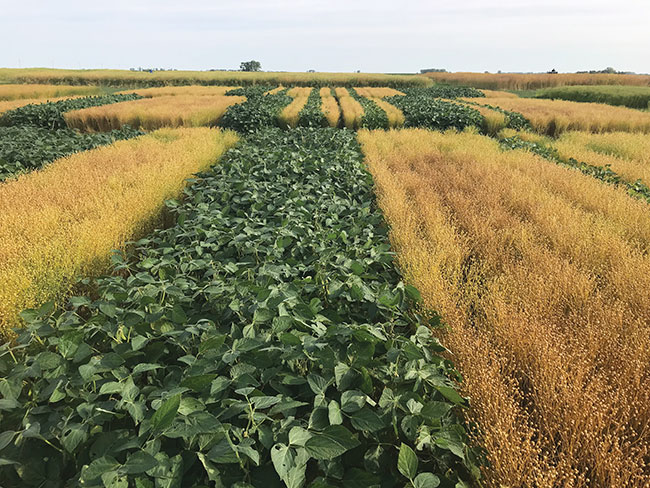 The 2019 soybean-flax intercrop in paired rows compared to a monocrop of soybeans in front.  Photos courtesy of Scott Chalmers.

Growers continually look for strategies to fine tune their cropping systems to reduce risk and increase productivity and returns. Recently, some researchers and growers in Western Canada have been looking more closely at companion cropping strategies and other options to increase revenues, reduce input costs and risk, and address pest management challenges.

“In our applied research program, we are trying to put some science and economics behind various cropping options,” explains Scott Chalmers, diversification specialist with Manitoba Agriculture working at the Westman Agricultural Diversification Organization (WADO). “There is lots of interest in diversifying cropping systems to include more companion cropping, however this is a relatively new and evolving area and at this point there is no guide book. We have several projects underway and in collaboration with other researchers trying to gain more information about what some of the more successful options might be and the various benefits and general economics of these options.”

Companion cropping is a strategy of growing various crop species together to benefit or co-exist for various reasons, and can include intercrops, relay and cover crops. Along with better utilization of available inputs and resources, other benefits include improved fertilizer and water use efficiency, improved soil health and reduced potential for pesticide resistance. Many growers already have flexible seeding and harvesting equipment in place for managing multiple crops and more sophisticated seed cleaning systems are increasingly available. However, there are also considerations that may make companion crops less suited for some operations, such as harvest and labor considerations, rotations, markets and insurance, and overall interest and courage to trial new cropping systems.

However, there are also considerations that may make companion crops less suited for some operations, such as harvest and labor considerations, rotations, markets and insurance, and overall interest and courage to trial new cropping systems.

“Intercropping, which includes two or more crops growing at the same time in the same space, is one strategy we have been trialing for a few years,” Chalmers says. “One successful intercrops is peas and canola, which have seeding dates and herbicides that overlap and similar growth stages. The intercrop helps growers save on nitrogen fertilizer and pesticides and we have found some disease and pest benefits. The peas hold on to the canola, improving canola seed shatter tolerance while keeping peas off the ground, reducing disease risk and making combining easier.

“In our 2017 and 2018 trials, pea aphids were significantly lower in the pea-canola intercrop compared to monoculture peas, although we aren’t sure why. So far, an economic analysis shows less risk with a pea-canola intercrop and higher yields. Pea-canola intercrop yields averaged 20 per cent (and up to 60 per cent) higher than monocropping in the past few years, and the magnitude of benefit tends to follow growing season rainfall amounts. The intercrop also provides some insurance against things like an early frost where frost tolerant peas will continue to grow even if a spring frost kills the canola seedlings, eliminating reseeding and still having a crop to harvest.

There are several other intercrop trials underway with peas and various crops including oats, wheat, flax, mustard and canola to assess the agronomic potential, yields, diseases and other factors. One trial in partnership with Syama Chatterton from Agriculture and Agri-Food Canada in Lethbridge, Alta., is experimenting with an intercrop of pea and mustard for potentially managing diseases such as aphanomyces in pea, the hypothesis that mustard may prevent disease development. Samples will be assessed and characterized in Lethbridge for diseases and in particular incidence and levels of Fusarium and aphanomyces. 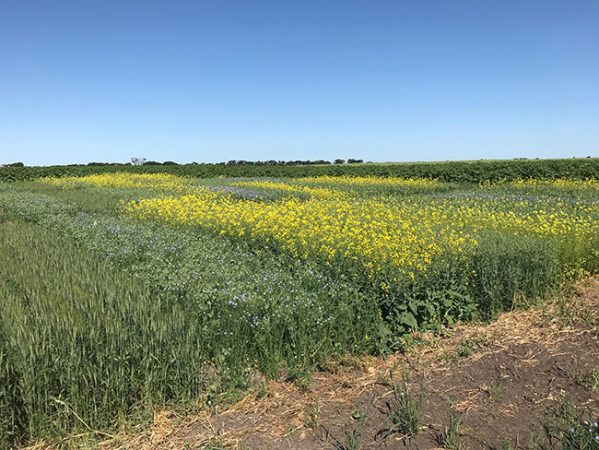 Research trials at the Elva, Man. location to assess the agronomic potential of growing peas with other companion crops such as oats, wheat, flax, mustard, and canola.

Flax and soybeans are another potential intercrop that tend to mature at the same time and share herbicides. Chalmers found that seeding the two crops in alternate rows is a better strategy, because in mixed rows flax tends to outcompete the soybean seedlings. “We also applied N treated with Agrotain to the flax rows to try and hide the N from soybean so it will continue fixing N,” adds Chalmers. “Overall we saw a significant increase in soil moisture use and increased nodulation in soybean with the intercrop over monocrops.

“Overall we saw a significant increase in soil moisture use and increased nodulation in soybean with the intercrop over monocrops. The one challenge with this intercrop is harvesting because combine settings are different.”

“The one challenge with this intercrop is harvesting because combine settings are different. There is also a potential allergen issue of cross-contamination of flax with soybean chips or soybean with flax bolls, which we are still trying to figure out. We aren’t promoting this intercrop for now until we better understand the science and economics of growing flax and soybean together.”

A pea-canola intercrop is also being included in a relay trial with alfalfa, which staggers the outcomes for harvest and takes it to the next year or stage. In this trial, the alfalfa seed was broadcast first in the spring, followed by direct seeding of the peas and canola. The alfalfa can either be left for forage production the following year or terminated using a burnoff. Chalmers says one of the benefits that alfalfa can offer, particularly under wet conditions in the fall or spring, is reducing moisture issues by taking up excess water and improving field access. With the alfalfa understory, getting into the field to combine or seed in wet spring conditions may be easier. The alfalfa may also act as a soil splash barrier of disease onto pea plants, reducing disease incidence. Other trials have included spring wheat and sweet clover, hemp and legumes, and a corn and hairy vetch trial. 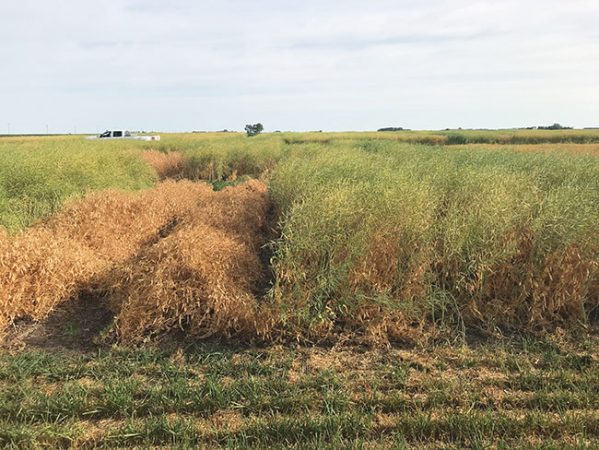 The pea-canola intercrop looking at effect of alfalfa in the understory and fungicide use.

“Growing hairy vetch as an understory to corn provides weed suppression and improves the competitiveness of the corn crop,” Chalmers explains. “We are trying to determine the best rate of glyphosate to use to suppress the vetch without killing it so the corn can get ahead and past the critical weed stage. The corn can either be harvested for grain corn or silage, or left standing for grazing. The corn and vetch together provide a forage that is very high quality, with corn providing high energy and vetch providing high protein. The following spring the vetch will usually die off if it has been grazed, or it can be terminated and seeded into. Rye and hairy vetch grow well together and can be harvested for seed together, then separated after harvest. The seed is toxic to livestock, so it can’t be used for feed, but hairy vetch can provide a reasonable return as a seed crop selling for about four dollars per pound. Another big benefit of vetch is in its ability to fix 80 to 100 pounds of [nitrogen] in a season, which changes the N economy of the whole system.”

Proof is in the planning

Chalmers cautions that the key is to plan ahead – if you don’t, you’ll set yourself up for a wreck. For example, hairy vetch can grow quite aggressively if not managed properly, and can cause significant challenges in the next crop. Vetch can also be a vector for sclerotinia, so if conditions are wet it can cycle the disease and possibly infect the other crop if it is susceptible as a physical transmission.

Unlike traditional spring crops that typically have a break over the winter, relay crops create a ‘green bridge’ over the winter and into spring, so there is a higher risk of hosting or contracting a disease that wasn’t intended or for different insect or weed pests. However, this also brings the interconnectedness of systems to the forefront that have been somewhat ignored in the past. Using this knowledge to benefit our understanding to make better choices with these living systems is valuable. Some farmers are also looking more closely at regenerative agriculture and the specific principles to see the benefits in a holistic view. These living systems often provide external benefits that aren’t immediately visible, but may benefit a future crop or the system in various ways. 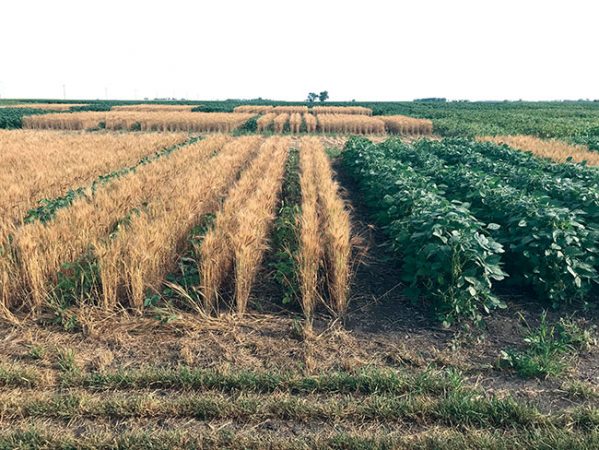 The winter wheat-soybean experiment looking at interrow planting of soybean in rows of winter wheat.

Next steps include a winter wheat and soybean intercrop trial, with the winter wheat already seeded in paired rows early in the fall of 2019. The soybeans will be seeded in alternate rows next spring in a relay. The trials also include a spring broadcast of N fertilizer and crop effects.

“We expect to be able to harvest winter wheat in early August, and the soybeans will continue to grow like a row crop and be harvested in late September,” Chalmers says. “At harvest the winter wheat is taller than the soybean and we have put a deflector on the harvest knife of the combine that will go across the top of the soybeans pushing them out of the way. There have been some social media posts and discussions around this intercrop, so we are trying to get more specific information with our trials. One of the questions and scrutiny of this combination is going over the field twice for seeding and harvest, so we will have to find out whether the economics prove out or not.”

Chalmers notes that each farm is different and there are different reasons for looking at alternatives from narrowing margins and lowering risk, to reducing the intensiveness of inputs and trying to put the “art of farming” and creativity back into cropping system management. Consumer demand is changing with more interest in sustainable and environmentally friendly products that sometimes offer a premium, so some farmers are trying to meet that demand. Pesticide or herbicide resistance to particular weeds or diseases means farmers have to think outside the box to keep up with challenges. Regenerative farmers are also concerned about soil quality and have been trying to enhance soil health with greater carbon sequestration in addition to no-till, in order to build organic matter, a buffer for drought, enhance nutrient storage and availability, improve water infiltration, and other benefits. Coincidently this is also helping fight climate change by capturing carbon and storing it into the soil profiles.

“Ultimately it is about each farmer integrating all of the various options and tools they include in their system together, from no-till, new genetics and herbicides to new crops and systems, new equipment and many other options,” Chalmers says. “Companion cropping and regenerative agriculture is a very dynamic and quickly changing space with lots of different aspects to follow. Farmers should try to gather as much information as possible from the various research projects, on-farm trials and experiences is a good strategy. Farmers are very good at taking good ideas they see from others and reinventing or innovating those ideas on their own farm. The key for making any changes is to take small steps, you can’t expect to switch the entire farm over completely, and modify the system until it works for every individual operation.”