Too hot. Too cold. Stressed. Hail damage. Often, these and other factors are cited when referring to a canola yield response to boron (B) application. Research over the years tends to indicate that a yield response to boron is unlikely under most circumstances. Still, around 20 per cent of canola growers include a boron treatment in their fertility program. 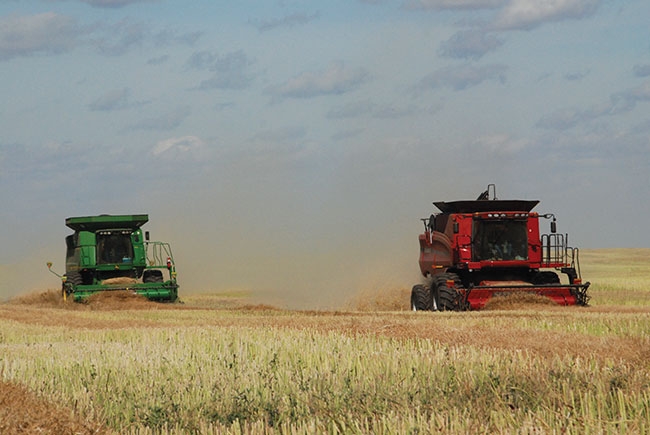 “Some growers apply input, whether it is a nutrient or crop protection product, sometimes without knowing with a high degree of certainty that there will be a response because they want to avoid any risk of yield loss. They may have a high target yield they desire to achieve and under these conditions, addressing any and all possible limitations they can control, is part of the path to getting there,” says Jeff Schoenau, professor of soil science at the University of Saskatchewan.

Boron research in Saskatchewan stretches back many years, often with no yield benefit to boron application. For example, Karamanos et al. (2002) and Malhi et al. (2003) found that even on soils with very low extractable B content, no significant yield response of canola to B was observed in the field. Further, research by Karamanos et al. in 2003 found a poor correlation between the commonly accepted hot water extractable boron tests and the critical soil test level of 0.35 ppm with canola yield response. (Karamanos et al 2003. Canola response to boron in Canadian prairie soils. Can. J. Plant Sci. 83: 249–259).

Murray Hartman, provincial oilseed specialist with Alberta Agriculture and Forestry (AAF) in Lacombe, went further and did a meta-analysis of other independent research conducted on the Prairies. Foliar and soil-applied treatments were compared to checks without boron. Out of almost 100 comparisons from more than 60 site years, about one-half gave an arithmetic yield increase, while the other one-half had a yield loss. This illustrates a normal distribution with no significant treatment effect. He also couldn’t find any correlation between heat or hail and a boron response.

Flies in the ointment
In 2016, Gary Kruger, irrigation agrologist with the Saskatchewan Ministry of Agriculture, conducted three irrigated boron fertility demonstrations, one at Grainland Irrigation District and two in Riverhurst, Sask. Yield response to boron fertilizer as a foliar spray with fungicide application at 20 per cent bloom was measured.

NDVI imagery was obtained for the Riverhurst sites. Two rates of foliar boron were applied at 1.43 pounds or 2.86 pounds B per acre (lb/ac). Plant tissue samples were taken prior to application and found to be just under 20 ppm B, below the suggested critical level for canola.

Kruger says a confounding factor that may explain why two of three sites provided a yield response was the wet weather in 2016. Typically, these irrigated sites would have received eight to 12 inches of irrigated water during the growing season. However, because natural rainfall was so high in 2016, the fields only received one to two inches of irrigation water.

Previous water analysis showed that each acre-inch of Lake Diefenbaker water contains 0.005 pounds of boron. Under typical irrigation, a field would be receiving about 0.06 pounds of boron per acre just from irrigation – perhaps enough to satisfy the boron needs of canola. He repeated the trial in 2017 at Grainland and south Riverhurst under typical irrigated conditions.

“There was still a yield increase in 2017, but they were smaller and likely not economic,” Kruger says.

Kruger had also hoped to be able to use tissue test sampling as a guide for when to apply foliar boron, but he wasn’t able to find a correlation between tissue readings and yield responses.

At the University of Saskatchewan, Ryan Hangs and Schoenau conducted research on 12 mineral and two organic soils from across the Prairies. Canola was grown to maturity in greenhouses with soil-banded 0.5 and 1.0 B per hectare and 0.25 kg B per hectare at flowering. Hangs says they didn’t see an effect of the foliar B on yield. “We did see a response to the banded B though, but it was limited (only two sandy soils that had poor extractable B levels and were low in organic matter and pH), and they were relatively small yield gains compared to the unfertilized control,” he says.

In another study, Noabur Rahman and Schoenau looked at canola response to boron applied at a rate of one kilogram of boron per hectare (kg B/ha) soil applied, 0.25 kg B/ha foliar, and 0.25 kg B/ha foliar applied twice. Four different Saskatchewan soils and one Alberta soil were collected and canola grown in greenhouses. The only response was with one Saskatchewan soil from Whitefox, where the soil test measured below the critical limit – but only a significant yield response to the soil application was observed.

What to make of it?
Stepping back and looking at all the research reviews, historical and present, foliar boron response is still unpredictable. Boron deficiencies in Prairie soils are rare, but can occur on sandy soils where water-soluble boron is subject to leaching. On dryland, Hangs’ and Rahman’s recent research lends credibility to soil applied B for deficient soils if a grower suspects yield losses, but cautions that this work was done under greenhouse conditions.

Schoenau says that predicting a boron response is difficult because of the complex interaction of many environmental, soil and plant factors that have to come together to produce a deficiency. A change in one or more factors can result in that deficiency disappearing, sometimes unexpectedly, which contributes to variable responses and challenges in predicting likelihood of response to application.

“I believe you would need a rather complex simulation model with a lot of input factors to predict with a high degree of certainty whether you would see a response, and even then predicting the weather is an inexact science,” Schoenau says.

On irrigated soils, Kruger cautions growers against applying boron to every canola crop they grow because of the possibility of toxic accumulations of boron in the soil. If growers feel they are deficient in boron, he proposes that canola growers consider applying foliar boron to canola once every five to 10 years to avoid the risk of toxicity.

“I think there is something to a boron response under irrigation but I’m hesitant to push it very hard because there are so many unknowns and it is unpredictable,” Kruger says.

And as always recommended, leave a check strip to assess response.