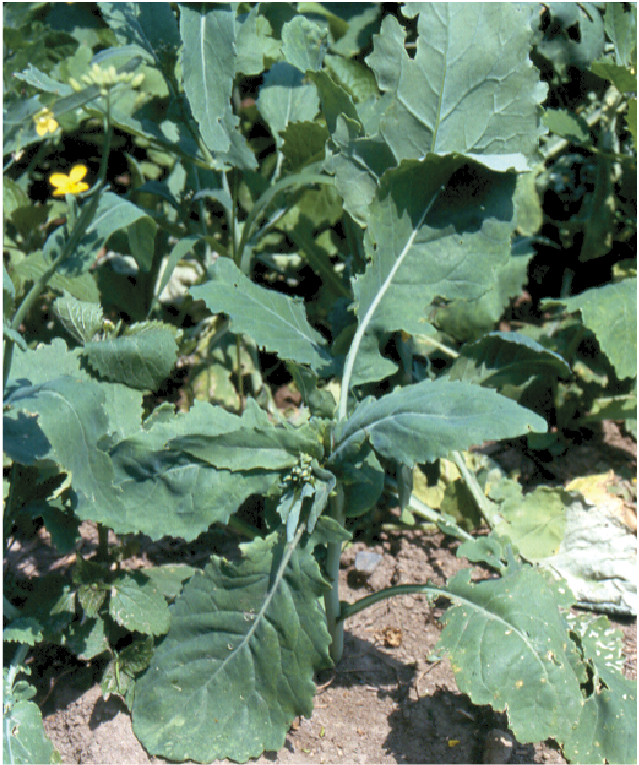 Researchers at the University of Manitoba, along with several conventional and organic growers are proving that intercropping can be successful in western Canada. A common practice in many parts of the world, growers in Canada are beginning to see the benefits. “Intercrops generally outperform monoculture crops in terms of yield, and weed, disease and insect pest management,” explains Dr. Martin Entz, Professor of Agronomy at the University of Manitoba.

Pea and canola intercrops are one of the more successful combinations. Research work conducted by University of Manitoba PhD student Tony Szumigalski and his advisor, Rene Van Acker, showed that a pea-canola intercrop yielded an average 21 percent higher than the crops grown alone on the same field. This positive yield benefit occurred 100 percent of the time. This increase is called over-yielding, which is calculated using the Land Equivalence Ratio (LER).

The LER is a measure of how much land would be required to achieve intercrop yields with crops grown as pure stands. When the LER is greater than 1.0, over-yielding is occurring and the intercrop is more productive than the component crops grown as sole crops. When the LER is less than 1.0, no over-yielding is occurring and the sole crops are more productive than the intercrop.

“Once a farmer is convinced, they will optimize their intercropping practices for their landscape, their region and their farming system,” says Entz. “Farmers who are willing to try something different, are thinking about the biology and ecology of their farms, and are a little more patient in terms of the way they make money will be the ones drawn to this concept.”

Colin Rosengren, who farms 4000 acres near Midale, Saskatchewan under a continuous crop, zero-till system, is a successful intercrop grower. He has been including intercrops in his operation for the past few years. In 2006 he had 2500 acres of intercrop, while in 2007 he grew 850 acres of pea-canola intercrop and 80 acres of chickpea-flax. “There are many benefits to intercropping for our farm, but the biggest benefit is the $20 to $40 per acre we consistently realize from intercrops compared to monoculture crops.”

Rosengren direct seeds peas and canola together in one pass, using two air-carts of dry product with four compartments and paired row Stealth openers with points. “We seed the peas down the point at 1.5 to two inches deep, usually with phosphorus (P) fertilizer. The canola is seeded in the paired row with some fertilizer as well.

Rosengren’s cleaning and separation system for intercrops. There are two big swing augers coming off the cleaner separating the crops directly into two bins.

We’ve been using seeding rates at about two-thirds of the normal rate for each crop, with two to 2.5 pounds per acre of canola and about two bushels per acre of peas.”

Using Western Ag Labs Crop Nutrition Planning software, Rosengren calculates the amount of fertilizer needed. For 2007 he used 25 pounds actual nitrogen (N), 15 pounds of P and 3.0 pounds of sulphur (S). “On a similar monoculture canola crop, I would typically use 65 to 70 pounds of N and similar levels of P, with a bit more S,” says Rosengren. “Obviously, with intercropping there is a savings of about $20 per acre for N fertilizer.”

In 2007, Rosengren grew Clearfield canola varieties 45H72 and 45H73 for the first time, having grown InVigor varieties in the past. “Although the intercrop mixture is very competitive with weeds, I did apply Poast for wild oats.” Rosengren also used Odyssey on some fields, but found the fields sprayed with Odyssey had fewer peas in the mixture as compared to fields not sprayed. “Dollar for dollar they ended up pretty similar, with yields of 17 bushels for peas and 14 bushels for canola in one field, and 18 bushels for canola and 11 bushels for peas on the other. Comparable monoculture canola yields in the area this year were 20 to 25 bushels per acre.” Rosengren plans to go back to InVigor next year and perhaps 45H73 as well.

After trying various varieties of peas, Rosengren still prefers the Maple variety. “Although we haven’t done replicated trials to-date, our observations are that the newer higher yielding pea varieties are not as good as the more vegetative types like Maple for intercropping. A variety like Maple is not as efficient at taking up N, so it shares more with the canola intercrop.” Rosengren grew Delta and Mozart last year, but did not have as good of canola crops, so is switching back to Maple and plans to conduct some replicated trials to determine the differences.

Straight cutting is a good option in most years, although Rosengren did swath some of the crops in 2007 because of a late flush of kochia. “The biggest assessment of whether or not to swath is a late flush of kochia,” says Rosengren. “It also depends on how tied up the canopy of the intercrop is.” With a previous crop of Maple pea and InVigor canola, the two crops were similar height and tangled together enough that the wind could not blow it at all. “We left it stand and had the best year so far, with about 20 bushels per acre of each.” The 45H73 canola is a taller canola, combined with the reduced stand of peas from spraying them with Odyssey, the thinner stand of mostly canola was more susceptible to shattering.

“One of the big advantages of growing pulses as an intercrop is the pulse grows up the cereal or oilseed keeping it off the ground, reducing the risk of soil contamination and downgrading at harvest,” adds Entz. “Pulse crops such as chickpea, lentil and pea get downgraded if there is a lot of dirt, which can be a bigger problem if harvest conditions are wet.” The quality of the pulse crop is typically higher as an intercrop.

Rosengren plans to continue to grow canola-pea, chickpea-flax and flax-lentil intercrops. “We used a row crop system with the chickpea-flax, seeding two rows of chickpeas, then flax,” says Rosengren. “By seeding the rows against prevailing winds, it is supposed to be a good disease break.” The crop looked good and was not sprayed in 2007 for disease. Rosengren also tried CPS wheat and pea, but would not do it again. With the heat he had last year, by the time the wheat was dry enough to combine, the peas shattered because they were so dry. There were also a lot of broken peas in the wheat, which are very hard to clean out.

Entz agrees, noting that wheat is difficult because it is the hardest to thresh, with some varieties of wheat harder to thresh than others. The combine mechanical action and force required to thresh wheat can do a lot of damage to larger seeded crops such as peas. “Peas and wheat as an intercrop are a challenge, and it doesn’t work very well under average conditions, although some farmers are making it work.” However, using a pea-wheat intercrop usually improves the protein content and results in higher premiums for the wheat crop. The more popular wheat intercrops are wheat-flax or wheat-mustard. 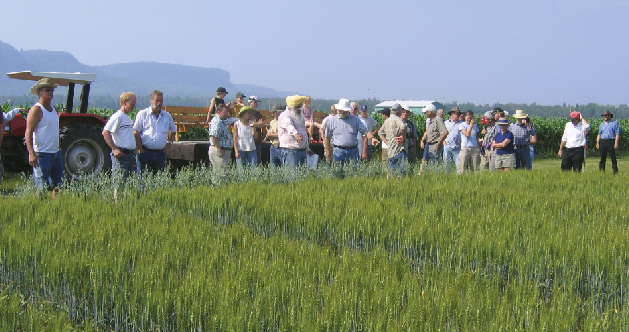 Weeds and pests also are reduced under intercropping. “Our general observations with intercropping are that flea beetles cause much less damage with a mixed crop than monoculture crops and seem to leave the field quicker,” says Rosengren. “I’m planning to try to seed next year without seed treatments, using Pioneer varieties that will be available without seed treatment.” The intercrop is also quite competitive against weeds, although Rosengren did use some herbicide treatments.

At the University of Manitoba, Szumigalski’s PhD research showed that, on average, weed biomass was reduced under intercropping as compared to monoculture. For example, comparing wheat, canola or pea crops grown alone, to intercropping wheat-pea, canola-pea, wheat-canola and wheat-canola-pea resulted in lower weed biomass for most of the intercrops. The best intercrop was canola-pea, which over-yielded 100 percent of the time under conventional management, while the poorest combination was wheat-pea, which had problems with weeds and lodging.

Although harvest is fairly straight forward, it does take a bit of planning and requires cleaning equipment.

“You have to clean and separate the pea and canola mixture, or any intercrop, immediately after harvest,” explains Rosengren. “We have older equipment that has been giving us some challenges, but essentially we have the system set up with two big swing augers off the cleaner directly into two bins. That way we can dump the trucks immediately when coming in from the field.”

For Rosengren, the reduced fertilizer costs and the higher yields of intercropping pea-canola as compared to monoculture crops are the biggest benefits. “We’ve consistently seen a $20 to $40 per acre net increase with intercrops and although we haven’t run the 2007 numbers yet, we expect the returns will be significantly more on pea-canola than the straight canola crops.” Rosengren suggests that starting small and understanding the logistics is the best way to get started in intercropping. “It can be a stressor for growers at harvest, but once you have the equipment set up to separate the crops then it is fairly straight forward and doesn’t take much extra time.”