With the introduction of Monsanto’s glyphosate- and dicamba-resistant soybean into the Canadian market in 2017, producers may be wondering if there is any benefit to tank-mixing the two herbicides for weed control. 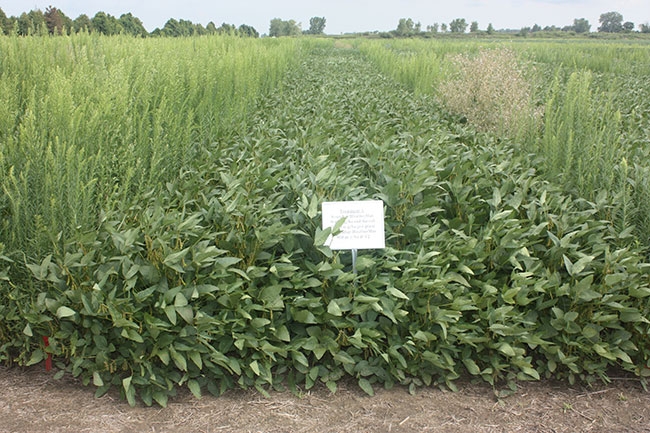 Plot shows glyphosate-resistant Canada fleabane control with Xtendimax applied in the burndown. With the introduction of Monsanto’s glyphosate- and dicamba-resistant soybean

It’s an apt question given the development of glyphosate-resistant weeds such as giant ragweed, common ragweed, Canada fleabane and waterhemp.

With support from the Grain Farmers of Ontario and Growing Forward 2 funding, researchers from the University of Guelph worked with several agricultural products companies to conduct six field trials at three locations in southwestern Ontario in 2014 and 2015.

The goal was to determine if there was a benefit to including dicamba with a post-emergence application of glyphosate at two application timings for the control of non-glyphosate resistant weeds in Roundup Ready 2 Xtend soybean.

For that study, Peter Sikkema, a professor of field crop weed management at the University of Guelph’s Ridgetown campus, says there was a small improvement in broadleaf weed control when dicamba was added to glyphosate applied post-emergence for the control of broadleaf weeds.

For example, at eight weeks after application, the addition of dicamba to glyphosate improved the control of redroot pigweed to four per cent, common ragweed one per cent, lamb’s-quarters three per cent, and lady’s thumb two per cent. There was no improvement in the control of barnyard grass or green foxtail when dicamba was added to glyphosate.

Valuable tool
Sikkema believes that the strategic and judicious use of dicamba has a place for weed management in soybean. “I think this is valuable technology that will be of benefit to Ontario soybean producers to address specific weed management challenges,” he says.

Research projects conducted between 2010 and 2017 that looked at the use of dicamba to control glyphosate-resistant giant ragweed, common ragweed and Canada fleabane in dicamba-resistant soybean certainly indicate this.

The first project took place in 2010 and 2011 on farms near Windsor and Belle River, Ont. Researchers established field trials to evaluate the effectiveness of glyphosate and glyphosate-plus-dicamba tank mixes for controlling glyphosate-resistant giant ragweed in dicamba-resistant soybean.

Glyphosate plus dicamba applied pre-plant followed by glyphosate plus dicamba applied post-emergence consistently provided 100 per cent control of glyphosate-resistant giant ragweed in dicamba-resistant soybean, which was correlated with the highest soybean yield. The conclusion reached by the researchers is that using dicamba in dicamba-resistant soybean can provide
effective control of glyphosate-resistant giant ragweed in Ontario.

The second project involved numerous ﬁeld trials over a seven-year period on farms in Essex and Kent counties, again in Ontario. This project specifically evaluated the use of dicamba in dicamba-resistant soybean for the control of glyphosate-resistant Canada fleabane.

“Every weed species is different and weed management is weed-species specific,” Sikkema says. “The secret is to know what weeds you have in each individual field and match the weed management program to that weed spectrum. I can’t stress that enough.”

Words of caution
Sikkema stresses that Ontario soybean producers should apply dicamba in glyphosate/dicamba-resistant soybean early in the season, preferably before sensitive crops are up in adjacent fields, to minimize injury to sensitive crops due to off-site movement of dicamba.

“We have a long history of developing herbicide resistance in Canada starting back in the ’50s with 2-4,D-resistant wild carrot,” he says. “Dicamba is a great tool in the toolbox. It complements glyphosate well, but when producers are targeting glyphosate-resistant weeds they should think of additional effective modes of action other than just dicamba.”

“We haven’t had a new, novel herbicide mode of action in over 20 years and there are no new unique modes of action in the pipeline,” Pfeffer adds. “We have to maintain long-term durability of the tools we have today otherwise we may hit a wall where there will be no other options. Farmers dealing with multiple resistant waterhemp and palmer amaranth populations in the U.S. are approaching this point with many modes of action no longer available.”

Tips for applying dicamba
Herbicide-resistant crops have increased productivity by decreasing the production costs of tilling. They also reduce the use of pesticides and allow for more flexible weed control application timing. Over-reliance on a single mode of action has also led to the development of glyphosate-resistant weeds causing producers to turn to dicamba, an effective herbicide for controlling many broadleaf weed species.

Apply early
“We push early application and we credit this practice with reducing the number of off-target movement situations we’ve had across Canada,” says Pfeffer, recommending the time to apply dicamba is the first time they drive through the field with a herbicide application. “In a no-till situation, it would be in the burn-down scenario. We want to utilize the residual broadleaf control to reduce early weed emergence and minimize crop competition; it is also the best time to control glyphosate resistant weeds such as Canada Fleabane.”

“Spray droplet size is really important,” says Pfeffer. “It’s the first step to take to reduce physical spray drift. You want to get to larger droplet size to control where the product is going; we recommend an ultra-coarse spray quality for all applications that include dicamba.”

Final tips
Pfeffer wraps up with a second, effective mode of action if you’re targeting glyphosate-resistant weeds such as Canada fleabane since dicamba is the only effective chemistry.

Finally, a triple rinse spray system cleaning with a commercial cleaner is important before moving to sensitive crops, always be aware of the surrounding area and do not apply when sensitive crops are downwind.