Features Agronomy Fertility and Nutrients
What are the best soybean rotations?

As soybean production becomes more and more popular in Manitoba, what are researchers and growers learning about which crop rotation options work best?

Soybeans have gone from about 50,000 to 1,330,000 acres in Manitoba in just 15 years. “This is exciting in that it brings more diversity into Manitoba crop rotations, which are dominated by wheat and canola, by adding another very profitable crop,” says Yvonne Lawley, agronomist in the plant science department at the University of Manitoba, who is leading a soybean rotation study.

“In general, farmers have characterized soybeans as a thrifty crop in that soybeans don’t require a lot of inputs. Very limited or no fertilizer is applied, and they grow well, produce good yields and are profitable. I’m interested in looking at soybean crop rotations and crop sequences in terms of how can we optimize this thrifty crop,” she notes.

Lawley explains that soybean’s thrifty nature comes from its symbiotic relationships with Bradyrhizobium japonicum bacteria and arbuscular mycorrhizal fungi (AMF), which both provide nutrients to the plants. However, the crop grown before soybeans influences the level of benefits to soybeans from these microbial relationships.

The objectives of Lawley’s study are: to identify the best crops to plant before soybeans, to examine the effects of the preceding crop on nitrogen fixation and mycorrhizal colonization in soybeans, and to measure soybean’s nitrogen contribution to the following crop in the rotation. Funding for the study is from the Manitoba Pulse and Soybean Growers, and Manitoba’s Agri-Food Research and Development Initiative.

The previous crop influences the amount of nitrogen provided to soybeans by their Bradyrhizobium bacteria by affecting the amount of soil nitrogen in the field. “Soybeans give photosynthate – essentially sugars and energy – to the bacteria in exchange for the nitrogen. But if nitrogen is abundant in the soil, then the plant doesn’t need to spend those resources feeding the bacteria,” Lawley explains. “The amount of nitrogen fertilizer left over from the preceding crop and the dynamics of the crop residue breakdown can both play into how much nitrogen is around when you plant your soybeans, as the relationship between the bacteria and the soybean roots is forming, and influences how the soybean plant is going to partition its resources for its symbiosis with Bradyrhizobium.”

Like many other plant species, soybeans form a symbiotic relationship with AMF. These fungi provide phosphorus to their host plants, and in return the hosts provide energy to the fungi. Lawley says, “The fungi’s hyphae, what we would think of as ‘roots’ of the fungi, grow throughout the soil. Because the fungi infect the roots of soybeans, soybeans can tap into that second network of hyphae. Another exciting thing about AMF is that their hyphae are smaller in diameter than some plant roots, so they can access pools of phosphorus that a larger plant root can’t physically get to.”

Certain crops, such as flax and corn, really depend on a strong mycorrhizal network being in place at planting time so the fungi can colonize the roots of the young plants and provide early-season phosphorus. Other crops, such as wheat and soybeans, are helped by AMF but are not quite so dependent on them. Yet other crops, such as canola, don’t form symbiotic relationships with AMF, so mycorrhizal populations tend to be lower after a canola crop.

Lawley notes that, on the Prairies, nitrogen-fixing crops tend to be thought of as crops that will provide nitrogen to subsequent crops in the rotation. However, many U.S. studies have found soybeans actually contribute little nitrogen to the next crop. “We haven’t done research on it here in Manitoba, so I wanted to do that to clarify and document the situation and to get farmers to think about it, because soybeans may be different than the pulse crops they’re familiar with.”

Her study, which is nearing completion, involved two field experiments.

Experiment 1 examined the effects of growing different crops before soybeans. In year 1, Lawley’s research group grew wheat, canola, corn and soybeans. Then in year 2, they grew the soybean test crop on each of those plots. They repeated the experiment over two cycles: the first cycle was in 2012 and 2013, at Carman and Kelburn; and the second cycle was in 2013 and 2014, at Carman, Kelburn and Portage. So they have soybean test crop data for five site years, including data on plant stand densities, plant development and yields. They also assessed the amount of nitrogen fixation by the soybean plants and the amount of AMF colonization of the soybean roots. Lawley’s graduate student Don Sanders is working on this project, and he has almost completed the analysis of the field and lab data.

Experiment 2 evaluated the nitrogen contribution of soybeans to the following crop in the rotation. It involved two cycles of trials, and took place at Carman and Glenlea. In year 1 of each cycle, the researchers grew soybeans and canola. Then in year 2, they seeded all the plots to wheat and applied a range of nitrogen fertilizer treatments. They measured wheat stand density, plant development, aboveground biomass and yield, and determined the amount of nitrogen in the wheat’s biomass. Lawley’s lab is in the process of analyzing the data from Experiment 2.

Experiment 1 is generating useful information on which crops to grow before soybeans. “For the mycorrhizal fungi results, we found very consistently through all the site years that colonization in soybean roots was highest following corn and soybeans, lowest following canola, and intermediate following wheat,” Lawley says.

“Canola is not a mycorrhizal host crop, and we grow a lot of canola in Manitoba, so we were interested to see whether canola in the rotation was a good thing or a bad thing for soybean yields. In our experiment, we saw the negative impact of canola on AMF root colonization in soybeans, but that didn’t necessarily translate into a lower soybean yield.” In only one of the five site years, did soybeans after canola have significantly lower yields than soybeans after the other three crops. So the soybeans were able to compensate for the lower AMF root colonization after canola.

“Nitrogen fixation tended to be higher following soybeans and corn, but it really depended on the soil test nitrogen values in the spring,” Lawley notes. That is, when spring soil nitrogen levels were high, the soybean crop didn’t invest as much energy in nitrogen fixation.

She says, “We saw lower nitrogen fixation following canola in three of the five site years, but again it was driven by spring soil test nitrogen levels. For example, at the end of the 2012 growing season, we didn’t have rain for a month and a half when the canola crop was growing. So the canola plants didn’t utilize all the nitrogen and there was a lot of leftover nitrogen. That translated into lower nitrogen fixation in the following soybean crop, but it didn’t necessarily result in lower soybean yields.”

The soybean yield results were mixed. “When we started this experiment, my hope was to make some very broad conclusions about what the best crops would be to grow before soybeans. Although we have fairly strong trends in AMF root colonization and nitrogen fixation, the yield trends are all over the place. Right now in our analysis, we are looking at which crop sequences have the most stable soybean yields,” she says.

“For sure, the most consistent performers for soybean yields were wheat and corn. They didn’t necessarily always result in the highest soybean yields in the experiment, but they never had the lowest. That result is also promising in that wheat-soybean and corn-soybean are good crop sequences in terms of the traditional recommendation of mixing broadleaf and grass crops in the rotation, both for disease management and herbicide rotation.”

So the main story from Experiment 1 is about nutrient use efficiency as a driver for crop sequencing. Lawley says, “I think it explains why soybeans are this Cinderella crop. It shows soybeans can do a really great job exploiting symbiosis in low phosphorus and low nitrogen soils, and that you are going to get the most out of soybeans in those situations because they have higher nitrogen fixation where there is low soil nitrogen, and they have higher root colonization by mycorrhizae when there’s low soil test phosphorus.” Soil testing will help growers to make crop sequence choices that make the most of soybeans’ thriftiness.

However, she adds, “Research on phosphorus recommendations for soybeans by Don Flaten in the University of Manitoba’s soil science department has been showing that soybeans respond much more to residual phosphorus in the soil than to starter phosphorus fertilizer. That finding underlines the need to maintain adequate soil phosphorus levels in your overall crop rotation.”

Soybean rotation trends in Manitoba
“Soybeans have been very profitable for many farmers in Manitoba. And some farmers are actually designing their rotations around their soybeans because they have been so profitable,” says Anastasia Kubinec, oilseeds crop specialist with Manitoba Agriculture, Food and Rural Development (MAFRD).

Kubinec, Dennis Lange, MAFRD’s pulse specialist, and Terry Buss, a farm production advisor out of Beausejour, have observed that many Manitoba soybean producers are choosing to grow cereals both before and after their soybean crops. Manitoba data show cereals and soybeans both yield well in cereal-soybean and soybean-cereal sequences. Kubinec says spring wheat and oats are the most common cereal choices, but all cereals perform well in rotations with soybeans.

“Some farmers are still growing soybeans on soybeans, but that is becoming less and less common,” Kubinec notes. “They are finding that if they grow too many soybean crops in a rotation, there are issues with Phytophthora root rot. Also, there is concern about soybean cyst nematode if it moves into Manitoba and its impact on soybean yields and frequency of soybeans in crop rotations.” She points out that both Phytophthora and soybean cyst nematode are long-term disease problems – once they’re in a field, they’ll be there for a long time.

Growing soybean on soybean or soybean and corn in tight rotation also increases the potential for developing Roundup-resistant weeds since most soybean and corn varieties grown in the province are Roundup Ready. Some growers are planting soybean after canola, but there can be an issue with canola volunteers.

Soybeans are a host for sclerotinia, and so are many other Manitoba crops such as canola, sunflowers, flax and edible beans. “If you have too many of those crops in the rotation, then you are going to get sclerotinia problems,” Kubinec says.

Her other soybean rotation tip is to keep an eye on soil nutrient levels. “Producers are finding that fields with soybeans in the rotation are getting lower on phosphate and potassium, especially if they also have canola somewhere in their rotation because soybeans and canola are both very high users. So, you need to be watching your soil test to make sure the soil has adequate fertility. As well, you need to know when and how you can apply fertilizer to support that crop, as applying it with the seed is not recommended. For example, you might want to apply additional phosphorus in the previous year with your cereal crop.” 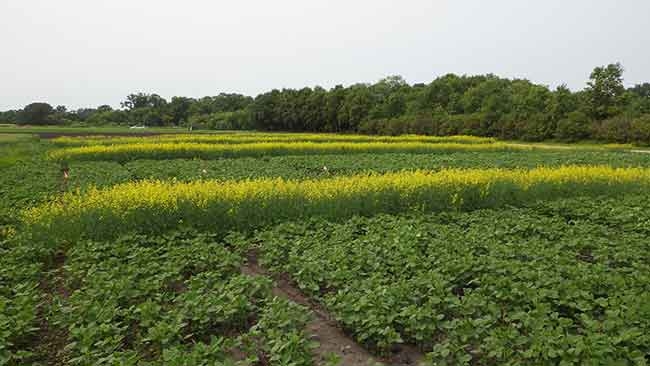