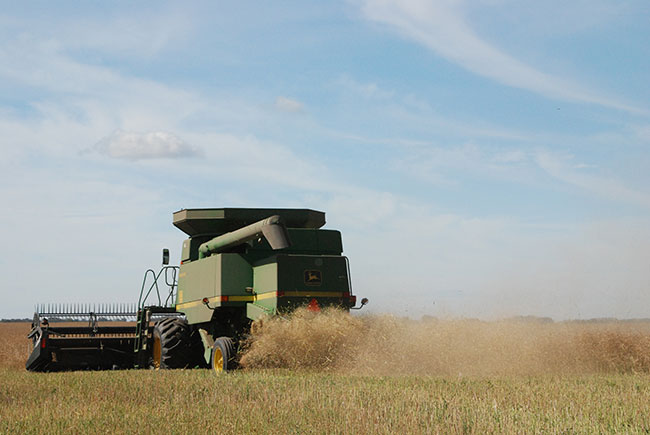 Whether straight cut or swathed, aerate and monitor canola once it goes in the bin. Photo by Bruce Barker.

Straight cutting canola is becoming more popular across the Prairies, partially because of gains in harvest efficiency. Research by PAMI in Portage la Prairie, Man., found that straight-cut canola was often as profitable as swathing and combining. However, one area that canola growers need to be aware of is that straight cutting canola can pose some unique, although not unmanageable, storage issues.

“Depending on the year and condition of the crop, there may be more green material from stems, leaves and pods going into the bin with straight cut canola,” says canola grower Kevin Bender in Bentley, Alta. “We generally watch those bins more closely and run aeration to cool the grain down.”

A challenge with green plant material is that it typically moves to the outer walls as the bin fills, and is susceptible to heating and development of mould. Surprisingly, during the drawn-out harvest of 2018, Bender didn’t have much problem with green plant material. Because harvest was delayed and he harvested wheat first, the standing canola had time to dry down.

A second consideration for canola storage is that straight-cut canola often goes into the bin at a higher
moisture content than swathed canola.

“Swathed canola generally dries down more uniformly so moisture content at harvest can be as low as six to seven per cent. When we straight cut canola, it is often close to 10 per cent, so we always aerate to condition the grain to prevent heating,” Bender says.

Samples were taken from each treatment and sent to a lab for a third party analysis of green seed, dockage, oil content, moisture, and seed weight. There were no differences in dockage, green seed, oil content or bushel weight between treatments.

Additional samples were sent to the University of Manitoba for respiration testing under the direction of Dr. Fuji Jian. Respiration rate was estimated by measuring the CO2 concentration built up over three days when stored at one of four constant temperatures: 20 C, 25 C, 30 C, or 35 C. At the end of three days, the air was exchanged and the process repeated over 10 weeks.

The preliminary results of the one-year study were not conclusive when comparing swathed to straight cut canola respiration rates. However, storage temperature had a strong effect on respiration rate at temperatures of 30 C to 35 C compared to 20 C for all treatments.

Unfortunately, the PAMI study did not receive funding to carry on the research into 2018. But the trend of greater respiration at higher temperatures certainly highlights the current canola storage recommendation – swathed or straight cut – to immediately cool down the canola to help prevent heating. Canola Council of Canada recommends that canola should be binned at a maximum of eight per cent moisture and cooled to 15 C or lower throughout the bin.