Clubroot-resistant varieties are the key weapon for fighting this devastating disease in Prairie canola crops. However, experience in other countries shows the pathogen can evolve to overcome such resistance. The Canola Council of Canada’s announcement in April 2014 of the possible erosion of some forms of clubroot resistance in current canola varieties is a stark reminder that it can happen here, too.

Clubroot is caused by Plasmodiophora brassicae. This soil-borne pathogen causes irregular swellings (galls) on plant roots. The galls hinder the movement of water and nutrients into the top parts of the plant. Up to 100 per cent yield loss has occurred when susceptible canola cultivars were grown in clubroot-infested fields in Alberta.

In Prairie canola, clubroot was first found in a handful of fields in the Edmonton area in 2003. By 2013, surveys had confirmed a total of 1,482 infested fields in the province. The pathogen has also been found in Saskatchewan and Manitoba.

As the pathogen’s name suggests, Plasmodiophora brassicae affects canola and other species in the same family – Brassicaceae – including field crops like mustard, vegetables like cabbage, and weeds such as stinkweed.

One place to look for new sources of clubroot resistance is among these relatives of canola. That’s what Dr. Fengqun Yu, Dr. Gary Peng, Dr. Kevin Falk and several other researchers at Agriculture and Agri-Food Canada (AAFC) in Saskatoon have been working on, through a number of interrelated studies.

“Canola’s scientific name is Brassica napus. The sources of clubroot resistance in Brassica napus are very limited,” explains Yu. She says the resistance genes in the clubroot-resistant canola cultivars currently grown in Canada are from limited sources and many might have a connection with a single source: a European winter canola cultivar called Mendel.

So the AAFC researchers are tapping into the genetic resources of six closely related Brassica species (see diagram below). Three of these are “diploids,” and three are “amphidiploids.” A diploid has two copies of each chromosome. An amphidiploid has two diploid chromosome sets, one from each parental species.

Yu explains the reasons for seeking resistance genes in these Brassica species: “The first reason is that some of these diploid species, like Chinese cabbage, bok choy and cabbage, show very high levels of clubroot resistance against all pathotypes of the pathogen found in Canada.

Peng and Falk led a study to screen close to 1,000 lines from the six species for clubroot resistance. They found 35 lines with resistance to pathotype 3 of the pathogen. Clubroot pathotypes are currently identified based on their ability to cause disease in a standardized set of hosts. In Alberta, the pathotypes include 2, 3, 5, 6 and 8. Pathotype 3, a very virulent type, is the most common pathotype in canola crops in the province.

Out of the 35 lines, the researchers decided to begin by working with eight very promising lines, most of which are B. rapa or B. oleracea. All eight have resistance against all five pathotypes.

The researchers are also mapping the location of these genes within the chromosomes. To do this, they are using two methods that involve molecular markers. So far, they have mapped three of the genes: Rpb1 and Rpb2, which are both on the third chromosome in B. rapa; and Rpb3, on the eighth chromosome in B. rapa.

“For two of these genes, the markers are available already for breeders to use in marker-assisted selection. And for a third gene, the marker could be available within one year,” notes Yu.

Yet another aspect of this research involves “resynthesizing” the amphidiploid species as a way to pyramid resistance genes. For instance, the researchers could cross a resistant B. rapa line and a resistant B. oleracea line to create a resynthesized B. napus line with resistance genes from each parent. They are resynthesizing B. napus, B. carinata and B. juncea and making good progress.

The results of all this work could soon contribute to new clubroot-resistant canola varieties.

In the meantime, Peng advises growers to do as much as they can to protect the resistance in the current clubroot-resistant canola varieties.

“Resistance is the cornerstone of clubroot management in Western Canada. Whenever possible, crop rotation and potentially cultivar rotation need to be kept in mind. Otherwise, eventually, the resistance will be eroded with the change in the pathogen population.” 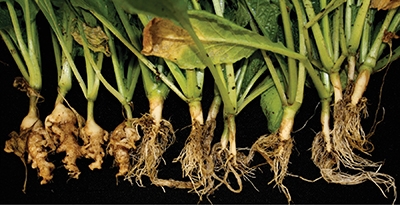 In these first-generation crosses between clubroot-resistant Brassica vegetables and a canola line Clubroot-resistant varieties are the key weapon for fighting this devastating disease in Prairie canola crops.