It’s 5 a.m. on a calm, sunny morning in June. Perfect time to spray? Not so fast. A temperature inversion is likely, which could result in small spray droplets remaining suspended in the air and moving off-target. 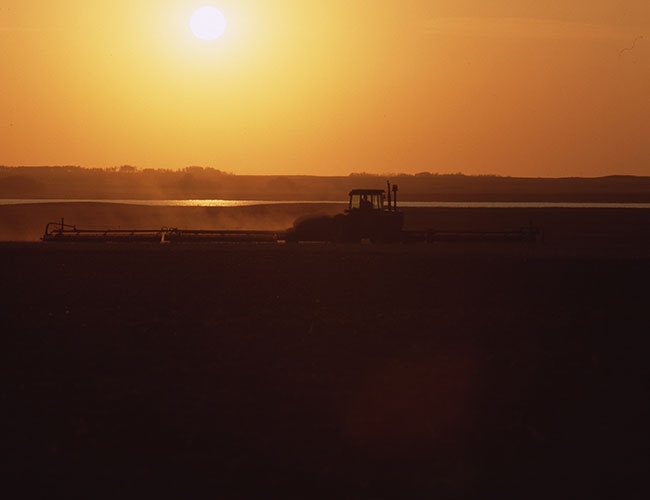 Evening inversions pose a greater risk for spray drift than morning inversions because droplets have longer to move off-target. It’s 5 a.m. on a calm

“I think it is a safe assumption to say that a temperature inversion on the Prairies will occur every night from one hour before sunset to one hour after sunrise unless there is cloud cover or wind,” says Tom Wolf, a sprayer technology specialist with Agrimetrix Research and Training in Saskatoon, who can also be found at sprayers101.com and also on Twitter @Nozzle_Guy.

Most farmers have directly observed the signs of an inversion. Dust or smoke may rise slowly and hang in the air, often slowly drifting away at the same level, or strong odours or distant sounds that aren’t normally observed are also indicative of an inversion.

In the early morning without cloud cover, the sun’s solar radiation warms the soil, which in turn warms the air near the soil surface. As the surface air warms, the warm air rises and is subsequently displaced by cooler air that sinks to the ground. This sets up what’s called a thermal turbulence cycle, where warm air is moving upwards and the inversion begins to break up.

By late morning, mixing and air turbulence between the warmer air and the cooler air often causes light, but gusty, variable-direction winds near the surface. The formation of late-morning or afternoon cumulus clouds indicates that this convection cycle is occurring. This condition helps mix adjacent air layers, diluting the dust, smoke, or drift they contain. The opportunity to spray will depend on how turbulent the winds are. By mid-afternoon, as the wind rises, the wind turbulence mixes warm and cool air near the ground to equalize the air temperatures.

The risk of spraying during an inversion is that small spray droplets do not disperse and dilute to harmless levels with moderate winds. Rather, air trapped by an inversion may flow downhill or move with very light breeze and carry the small droplets, which remain very concentrated, off-target to other crops where drift damage may occur.

Cloud cover can prevent inversions from forming. Generally, greater cloud cover causes slower surface cooling and slower inversion formation in the late afternoon or evening.  When skies are completely overcast, the surface will cool very slowing and inversion formation is unlikely. This is why nighttime temperatures are usually warmer under cloudy conditions than clear skies.

Avoid spraying in inversions
Even with low drift nozzles, spraying is not recommended during an inversion. Low-drift nozzles still produce some fine droplets less than 200 microns in diameter. While larger droplets with greater velocity will hit the target quickly, fine droplets remain suspended and move with low wind speeds and float for long distances. The high humidity conditions associated with clear nights prevent these droplets from evaporating.

Early morning shortly after sunrise when skies are clear and wind is low is usually one of the worst times to spray. Under these conditions, waiting until solar radiation starts to heat up the ground will weaken the inversion. A thermal turbulence cycle will develop, and once the inversion is broken, spraying can begin, as long as winds do not become too strong to cause drift of larger spray droplets.

“A good rule of thumb for inversions is to wait a couple hours after sunrise before spraying to allow the inversion cap to disperse,” Wolf says.

In its comprehensive document on temperature inversions, NDSU reports that low wind speeds three-to-four hours before sunset under clear sky conditions may appear to be ideal conditions for pesticide application, but these conditions can be deceiving, and are actually ideal for rapid inversion formation.