Grain drying systems may pay for themselves over time. 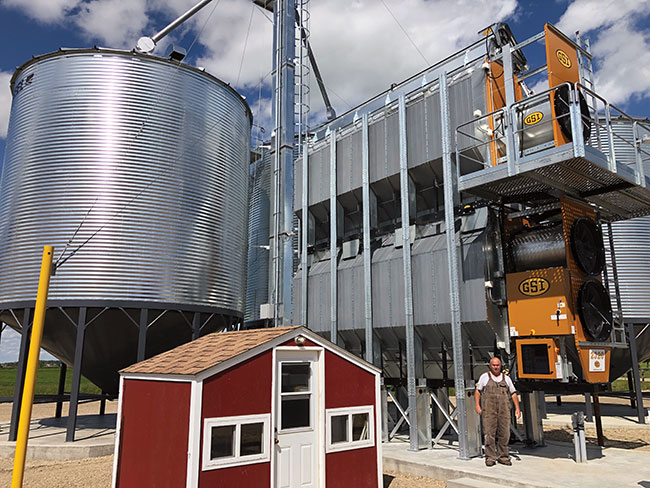 Western Canada has seen wet harvests for a few years in a row.

“It all depended on location. Last year, the southern part of Western Canada was pretty good but toward the north there were many producers who needed to dry grain,” says Lorne Grieger, assistant vice president for the Prairie Agricultural Machinery Institute (PAMI’s) research and development services in Manitoba.

In Alberta, 2018 was one of the wettest harvests in years for many producers.

In many ways it’s impossible to plan for a wet harvest, because nobody knows exactly what conditions Mother Nature will send year-to-year. But there are a few ways producers can plan for the worst and maximize their profit potential no matter what comes.

According to Kenton Possberg, a Saskatchewan director for Western Canadian Wheat Growers, harvest planning should begin many months before the crop is ready to come off the field.

Possberg runs a grain operation in Humboldt, Sask., growing canola, malt barley, spring wheat and oats. “For us, harvest planning actually starts with planning crop rotations the previous winter, and deciding when to start seeding,” he says. “We start planting malt barley first because the crop matures earlier and we can get it off in August, and then we can usually hold the quality. Then we go into oats and wheat and canola.”

Harvest conditions in the Humboldt area have been variable in the last few years, but last year was very challenging for some producers. “The whole month of September was a write-off because of rain and damp conditions,” Possberg says.

Innisfail, Alta., farmer Wade McAllister is the director-at-large for the Alberta Barley Commission. McAllister grows malt barley as well as CPS feed wheat, canola and oats on his operation. He says farmers in his area have seen snow every harvest for the past four years, and the only way to prepare for harvest is to start as soon as possible.

Last year, McAllister’s grain dryer started running in August. “Everyone said we should let the grain dry naturally,” he said. “But then it snowed all through September, and our malt was already in the bins in perfect shape.”

Grieger says it’s absolutely key for producers to understand their equipment so they can successfully harvest as much of the crop as possible – and maintain its quality once it’s in the bins.

Producers can dry grain by using aeration or natural air drying in the bin, adding supplemental heating to improve drying capacity of the air. They can also purchase grain dryers, which quickly heat grain to dry it and then cool the grain down prior to storage. There are unique benefits to each of these systems, and Grieger says PAMI maintains resources on its website to help producers make decisions.

Producers should look to have equipment in place well before harvest, he says. If they are considering adding a heating or drying system, they should be aware of regulations that go with it before harvest heats up.

If they are considering adding a heating or drying system, they should be aware of regulations that go with it before harvest heats up.

For grain dryers, he says, “make sure it’s a CSA approved system, and get it set up and certified for use through the office of the fire commission (in Manitoba). If you’re installing it you should understand the approval process in advance.”

PAMI has been working on research projects related to grain storage systems for several years. One recent study compared continuous fan operation in an aeration and natural air drying system to the Australia-developed Aeration Manager (AM) system, which uses an algorithm to predict grain temperature and moisture and can cool or dry the stored grain. 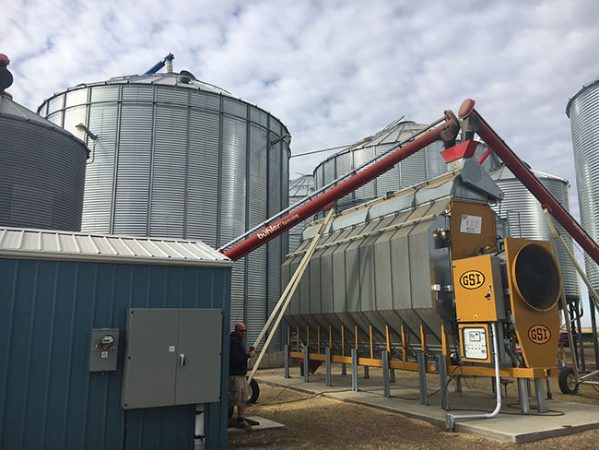 McAllister says his operation invested in its first grain dryer ten years ago. It was a large capital investment, but it paid for itself within a year or two, he says. That system could handle 300 bushels per hour, and by 2018 it was running day and night for six days straight.

It was a large capital investment, but it paid for itself within a year or two, he says.

This year, McAllister replaced it with a much larger GSI system that handles 1,100-1,500 bushels per hour. The new system can be controlled remotely and offers regular updates and readings by mobile app. “With the expanding acres, the old dryer was getting too small and we were getting a backlog of grain so we put the new one in to speed up the drying process at harvest,” he explains.

McAllister estimates that only about 35 per cent of producers in his area have their own grain dryers. They still have options for drying – most elevators have dryers, for instance, or they can have custom drying done at a neighbours’.

This fall, Alberta Wheat and Barley is embarking on a grain conditioning study that will assess the on-farm energy consumption and efficiency of a variety of systems.

McAllister says grain drying is critical for malt barley production, because quality parameters are so strict: wet grain can stain or begin chitting, or pre-germinating, so the best thing producers can do is get the crop off as soon as possible. On McAllister’s operation he takes it off as soon as it can go through the combine – at around 18 per cent moisture – and dries it down to 13.5 per cent moisture in the dryer. Each year McAllister’s operation puts at least a third of its malt barley through the dryer.

“This way we can take it off and do it ourselves. And we just know that we’re going to get that heavier grain, with better quality. It takes a lot of the stress away,” he says.

He believes more producers should make the investment – it’s a large startup cost, but it can pay for itself in only a year or two if producers currently can’t get their grain off the field in time and their crop is sold as feed.

Possberg’s operation also runs a GSI dryer, but he says he doesn’t look at it as a way to manage a wet harvest – for him, it’s a way to maintain better equipment utilization. This year, Possberg upgraded his dryer system to a larger Farm Fans dryer, which should add 30 to 40 per cent greater capacity. He says his operation plans to run the dryer every year, harvesting malt at the 17 to 18 per cent moisture mark so they can get out in the field earlier.

“If you plan to use it only as a last resort it can get expensive because you’ve already probably seen drops in quality,” he says. In addition, if the dryer isn’t set up properly and is labour intensive to use, it probably won’t be used and the system won’t represent a return on investment.

“With the dryer, you can start earlier in the morning – if you have a heavy dew you don’t have to wait as long for it to dry down – and you can take a few loads off and run them through the dryer. You can get started with harvest two or three days earlier. Sometimes that makes all the difference in the world,” he says.

“You can get started with harvest two or three days earlier. Sometimes that makes all the difference in the world.”

Possberg doesn’t chalk recent wet harvests up to climate change – or, more specifically, he doesn’t think knowing the cause will change the way farmers tackle challenging farming conditions. Whatever happens, it’s farmers’ job to be able to roll with the punches.

“You just have to manage with the weather, and ultimately weather is the major factor in what we do. You have to be prepared for whatever comes,” he says.


Related
Hit the hardest, Alberta harvest finally wraps up
Soil moisture improves and harvest progresses in Alberta
Manitoba’s sunflower and grain corn harvest stalled the most
Manipulator PGR now available for use on oats and barley