In Manitoba and Ontario, many strategies can work – as long as producers are soil testing.

Corn requires several nutrients, but nitrogen, phosphorus and potassum are what need to be managed most. photo by top crop manager.

It was the late George Jones, an Ontario corn researcher, who famously said that growing corn was a “religion.”

“He’d say, ‘People don’t meet up in the coffee shop to talk about fertilizing cereals. They sure do with corn,’” remembers John Heard, soil fertility specialist for Manitoba Agriculture.

Whether farmers are in Western or Eastern Canada, there is no one “right” way to manage corn fertility.

The key, Heard says, is to tailor the system to work under local conditions.

“You can manage and feed corn in a variety of ways that can work well. Many may offer room for improvement, but there are over 20 ways to put 100 pounds of nitrogen on corn,” Heard says. “I’m encouraged that there’s no single right way.”

Recent research conducted by now-retired University of Manitoba professor Don Flaten and Agriculture and Agri-Food Canada agronomist Curtis Cavers, for example, supports the idea that there’s no clear-cut advantage or differences in results between different sources and placement for corn. “Presuming rates were similar, they got similar yields,” Heard says.

It’s good news for producers, but won’t come as a surprise. In fact, a recent grower survey by Stratus Research, funded by the former Manitoba Corn Growers Association (now Manitoba Crop Alliance), found that the province’s producers successfully use a wide range of fertilizer practices.

Corn requires many essential nutrients to grow properly, but the crop is hungriest for three main nutrients – nitrogen, phosphorus and potassium – as well as sulfur and the micronutrient zinc. It also requires calcium, magnesium and several micronutrients including boron and iron. The latter are typically present in Manitoba and Ontario soils and do not need to be supplemented.

Even if there’s no one right way to fertilizer corn, there are a few approaches that might come in handy when managing nitrogen, phosphorus and potassium in Manitoba and Ontario.

But in order to do so, producers need to soil test, Heard says. “Use soil tests not only for decision-making, but as an auditing tool for whether you meet the needs of the crop,” he says.

One new rule of thumb comes from University of Manitoba studies on soil testing after the corn crop: “With corn, if a soil test is testing 20 to 50 lb./ac of N, that means that the producer did a pretty good job of supplying N to meet yield potential. If it soil tests less than 20 lb./ac of N, the crop was under-supplied for yield potential,” Heard says. “If you’re measuring more than 50 lb. residual N, then more N was supplied or was available than that crop required for its yield potential.” 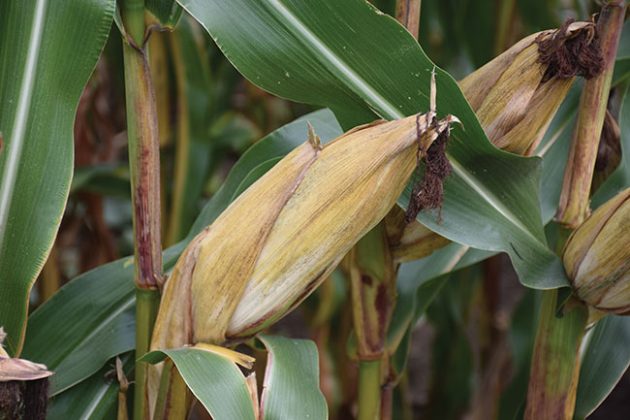 High fertilizer prices have resulted in a push for greater fertilizer efficiency, and optimizing placement will ensure the best response.
Photo by top crop manager.

Manitoba
Most Manitoba producers apply N via subsurface banding. According to Manitoba Agriculture, band placement is 20 per cent more efficient than broadcast application.

One interesting finding from Manitoba Corn Growers Association’s grower-funded survey is that 24 per cent of
respondents had access to manure that could be exploited as a fertility source, Heard says. “That’s good news. We like to see manure used up on hungry crops.”

A relatively small percentage of growers – 11 per cent – used enhanced efficiency fertilizers (EEFs) in Manitoba, although Heard believes that number might increase. But the utility of EEFs really comes into play in wet years, when N is vulnerable to loss via leaching or denitrification, and the last few years have been dry in Manitoba. Most EEFs, he says, are a type of insurance against wet conditions.

A great deal of research in recent years has looked at placement and timing. Fall application of N has been a staple for producers farming clay soils; this allows them to go straight into the field with the planter in the spring without the need for spring tillage – a boon in dry years.

But on lighter, sandier soils at greater risk of leaching, many growers are choosing to sidedress and do in-season applications, Heard says.

There’s a growing body of research on split N applications, he adds, comparing applying all N at seeding versus holding some back for later application; these trials show that only occasionally was there benefit or penalty to applying later. But he cautions that in one study conducted by Cavers, anytime less than 50 lb. N was applied to start the crop, yields couldn’t catch up with split N later in the season.

“Don’t start your crop too lean – make sure you have at least that much, and then follow up later,” he says.

“If there have been any trends over the last few years, there’s been a move to more high-clearance applicators for later in-crop applications of UAN or dry nitrogen products.”

Some past Ontario Soil and Crop and OMAFRA on-farm research has looked at late nitrogen applications, but Rosser says yield benefits of the practice are generally only realized in very wet years.

Research completed by now-retired University of Guelph cropping system professor Bill Deen at the Elora Research Station has shown that optimal N rates vary year to year based on rainfall amounts between June 15 and July 15; rainfall in this period closely correlates with yield at the end of the year, which appears to be driving optimum N rates at Elora, Rosser says.

“Looking at rainfall might be one of those mechanisms whereby you can adjust N rates. If you’ve had above-normal rainfall and yields look good, you might want to bump up rates, and vice versa – if rainfall during this period is well below normal and impacting yields, perhaps you could pull back,” he says, adding that more research is needed before definite recommendations can be made.

Phosphorus and Potassium
Corn relies on large amounts of phosphorus and potassium early in the season for healthy development. Both nutrients are “immobile” in the soil, meaning placement is key to ensuring roots come in contact with them.

Band applications for both nutrients is therefore preferable to broadcast application.

Manitoba
Heard says Flaten’s lab has conducted research on the yield drag that sometimes occurs when corn is planted after canola. Corn is well known to benefit from beneficial soil fungi mycorrhizae through increased P uptake. Canola does not need or support mycorrhizae during its growth, so following crops may lag until mycorrhizae re-establish.

“Corn following soybeans advanced in maturity more quickly and was less needy or responsive to phosphorus than if we grew corn after canola,” Heard says. “After canola, there was a marked response or benefit to applying side-banded phosphorus.”

This practice didn’t always close the yield gap, but it did narrow it, he says. When it comes to potassium, corn readily exhibits deficiencies, and deficiencies are more common in corn grown on sandier soils.

“One of the old established practices on the Prairies is that banding potassium is much more efficient than broadcasting it,” he adds.

“We encourage growers to respect potassium in soil tests. If your dollars are short and you can’t broadcast the high rates required, apply a lower rate of banded potassium to meet the crop’s needs. Here on the Prairies, we export a lot of potassium out of the ground with our crop and we don’t replace that. On many clay soils we have ample native reserves, but in lighter soils we really need to soil test and address [any deficiencies].”

Ontario
Rosser says the push for greater efficiency is at least in part a necessary response to higher fertilizer prices.

“If you’re looking for efficiency,” he says, “optimize placement to get the most response out of fertilizers that you can.”

Again, the best way to have an idea for how responsive your farm will be to P and K is to soil test; in Ontario, producers should follow guidelines in the Agronomy Guide for Field Crops (OMAFRA’s Publication 811).

Rosser says that in the last few years, questions were raised about the recommendations developed many decades ago for fertilizer rates. “Six or seven years ago, former corn specialist Greg Stewart and Ken Janovicek from the University of Guelph pulled more recent data together and the more recent research trials did support that these recommendations still provide the most economic fertilizer rates during the year of application,” he says.

Rosser says another question has been, “If using these recommendations allow a soil test to slip lower over time, is there a yield impact to this compared to maintaining a moderate soil fertility level?” A Grain Farmers of Ontario-funded long-term P and K research project is trying to answer this question.

For phosphorus, Rosser says producers should use placement, rate and timing guidelines in the Agronomy Guide.

For potassium, he echoes Heard’s advice: in other words, that it’s critical to address deficiencies.

“Quite often you don’t get the benefit out of your other fertilizers if you’re not watching potassium. It can’t be ignored,” Rosser says. “Going back to some older Ontario research, in reduced tillage scenarios, including some potassium in starter fertilizer provided a yield response above just broadcasting it all.”

Rosser has been working on a strip tillage fertility project with Grain Farmers of Ontario looking at timing – specifically fall application versus spring application in strips and broadcast applications under full width tillage on low testing soils.

“This would suggest that in strip tillage, placement may be more important. That story has been told in no-till for quite a while, but appears it may also hold true in strip till.”

In Rosser’s strip till study, initial results suggest that strip-tilled corn may not be as adept at accessing soil nutrients as corn planted under full-width tillage. This means producers should go into the season with strong fertility packages and careful placement.