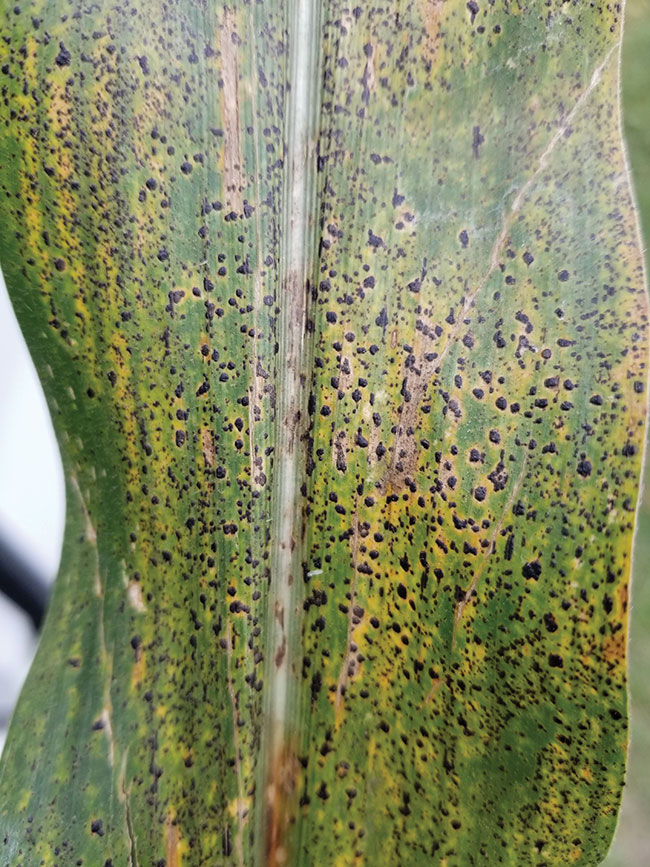 Tar spot is present in southern Ontario, so early identification is more important than ever. Photo courtesy of Darcy Telenko.

Tar spot is here to stay.

In September of 2020, researchers confirmed the plant disease, which is caused by the fungus Phyllachora maydis, had reached Ontario. By winter, they’d found it in the lower five counties of southern Ontario.

“The big question was whether it would overwinter,” says Albert Tenuta, field crop pathologist for the Ontario Ministry of Agriculture, Food and Rural Affairs (OMAFRA).

On July 2, 2021, tar spot was found in low levels in West Elgin County in an area that had seen a fair amount of the disease the previous summer, indicating that it had, in fact, overwintered.

“We saw a scattering of lesions on some plants. One or two out of every hundred plants had tar spot that early,” Tenuta says.

Across the border, tar spot was found in Michigan, Indiana and Iowa; by the second week of July, it was identified in Wisconsin and Illinois.

Ideal conditions for tar spot, he says, include temperatures between 15 and 21 to 22 degrees Celsius and high relative humidity (greater than 75 per cent) leading to leaf wetness.

But in Ontario, the temperatures remained high for much of the summer – between the upper 20s and 30s, with humidity higher than the norm. Typically, Tenuta says, they’d have expected tar spot to slow down under those conditions, but the disease rapidly spread.

“The surprising thing this year was how widespread tar spot was in Ontario,” Tenuta says. “Basically, as of the beginning of October, we have tar spot to some degree in all counties from Guelph to Windsor, from [the north shore of Lake Erie] up to grapers’ country.”

Severity depended on field conditions and hybrid susceptibility, but also when the infection occurred: the earlier fields were infected, the greater the severity.

It’s a warning for Ontario growers: once established in a region, tar spot can hit corn growers hard.

“This is a disease we need to respect, learn about and prepare for,” he says. “Producers don’t need to fear it, because we have tools available to us, and we need to modify and build on those tools in the toolbox right now.”

Scouting and management
Now that tar spot is established in southern Ontario, it’s critical that producers identify tar spot in their fields as early as possible, which will help them identify their risk, Tenuta says.

Supported by Grain Farmers of Ontario, Tenuta is involved with the Corn Disease Working Group and the Tar Spot Working Group through the Crop Protection Network. Trials are underway in Ontario and the U.S. looking at fungicide efficacy, disease epidemiology and hybrid evaluations.

Few hybrids available in Ontario are tolerant or partially resistant; the majority are susceptible. Going into 2022, it’s important for producers to talk to seed retailers or agronomists to identify hybrids with some resistance to the disease, Tenuta says.

“We don’t have anything that would be considered highly resistant, so we need to look to other tools to develop an integrated management program,” he adds.

The next step, he says, is to use the Tarspotter app to assess disease risk. The app integrates weather predictions, crop phenology and site-specific information to assist farmers in making management decisions.

The best time to manage tar spot with fungicides is during the V8 to R4 growth stages.

Tenuta’s team is running fungicide strip trials to identify the best available chemical controls for tar spot. In those plots, they saw a 30- to 40-bushel yield increase when they used a fungicide compared to when they did not. Results aren’t ready, but Tenuta’s research appears to echo U.S. results so far, which is promising.

“The tools that growers have available will help them reduce the effects of tar spot,” he says. Some fields in the extreme southwest could have benefited from a second application this year.

The disease can be reduced but not eliminated; this means producers need to stay on their guard.

Residue management and crop rotation will help in terms of reducing tar spot risk and impact, but they’re less effective than using resistant hybrids, scouting and applying fungicides at the right time, Tenuta says, because the pathogen is wind-borne. “It’s weather conditions that drive disease development,” he says.

“Going into next year, it’s important to be out there as soon as possible to scout. Be aware of the disease and where it is and talk to agronomists. That will help guide us with in-season disease development and controls.”

If producers find tar spot in their fields in 2022, they should get in touch with Tenuta so his research group can update maps in realtime. Tenuta can be reached at albert.tenuta@ontario.ca or 519-360-8307.