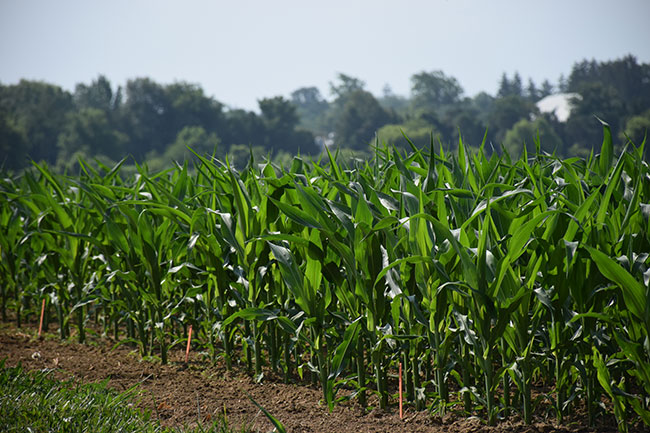 A study led by the University of Guelph’s Claudia Wagner- Riddle looks to determine the impacts of different agronomic approaches on nitrogen losses in Ontario corn. Photo by top crop manager.

A new study from the University of Guelph looks at how management approaches can reduce N2O emissions at the provincial level, while considering trade-offs with other forms of N loss, such as leaching and ammonia volatilization.

The study was led by Claudia Wagner-Riddle, a professor in the School of Environmental Sciences at the University of Guelph, in collaboration with Agriculture and Agri-Food Canada  (AAFC) researchers, and funded by the university, AAFC and OMAFRA.

The goal of the study, Wagner-Riddle says, was to play out nutrient management scenarios over the long-term. Nitrogen losses through nitrous oxide (N2O) or greenhouse gas emissions are hugely affected by interactions between the weather, management decisions and soil. “It’s difficult to explore all the scenarios with field data,” she says.

The study used a crop model called the Denitrification-Decomposition (DNDC) model, which was originally developed at the University of New Hampshire but has been validated for Ontario conditions, to look at the effects of 11 different fertilizer management strategies on N losses in Ontario’s corn-growing regions over a 30-year period.

Wagner-Riddle says the study aimed to quantify the impacts of different agronomic approaches on N losses in the whole of Ontario’s corn growing region, but also quantified potential yields per hectare to offer a sense of how individual growers might be affected.

The fertilizer industry coined the term “the 4Rs” – right rate, right source, right time, right place –to highlight four factors that affect N losses, Wagner-Riddle says. But the 4Rs concept doesn’t offer guidelines on how changes to one of these factors might affect the other three.

“There is interest and awareness of the 4Rs, there’s a lot of effort put in by the fertilizer industry – the message is getting there, that it’s good to manage fertilizer judiciously. I guess the other message then is that it’s really important to look at the combinations of practices. If you’re improving placement and using inhibitors, you should really be looking at adjusting the rate,” she explains.

“The whole idea of the 4Rs is to increase efficiency and reduce losses, but if you’re, say, injecting N into the soil as a sidedress treatment versus surface broadcasting N, and you’re not reducing your rate, you might have a negative effect via much more nitrous oxide or nitrate leaching.”

The 11 management scenarios used in the simulations were drawn from a survey of 506 corn growers in Ontario and Quebec. The survey showed that eight per cent of N fertilizer volume is applied as a surface broadcast, while fertilizer injection at planting and sidedress application respectively account for 38 and 26 per cent of N application in corn. The study considered broadcast application five days before planting to be a “worst-case” scenario, and the other 10 scenarios included one or more improvements in application method, source, timing or rate.

The study showed that much greater volatilization losses occurred in broadcast versus injection and sidedress scenarios. The use of nitrification and urease inhibitors reduced N2O emissions by 11 to 16 per cent. The best case scenario, the study found, was to combine N rate adjustment with other practices.

Over the 30-year period, addition of inhibitors following N rate adjustments reduced N2O emissions by between 11 per cent (in the broadcast scenario), 13 per cent (injection) and 15 per cent (sidedress).

In terms of yield, the model found that a management shift to the use of injection, injection plus inhibitors or sidedress plus inhibitors would increase corn yield by three to four per cent and reduce fertilizer rates by 23 to 32 per cent compared to baseline – which would have a significant positive economic effect.

Future work
Wagner-Riddle’s team is working on a second paper that will look more closely at the economics of various fertilizer management scenarios. But they’re also looking at how they might eventually offer decision-making tools to farmers based on what they’ve learned.

“I think there are general assumptions that are made in terms of the losses of ammonia during application, but it’s not a fine-tuned algorithm that takes into account all these subtleties of weather and soil, the product and how you place it,” she says.

“The goal for us, ideally, is that we’d have a more sophisticated tool, like a calculator, for taking all these different combinations into account – how the product was applied, the rate and the time.”

Such a calculator might help a farmer determine appropriate N rates based on application method, soil type and weather conditions – as well as, potentially, economic impacts of the various approaches.

Wagner-Riddle says her research is slowly helping build toward that goal.

“It’s a team effort between students, postdoctoral fellows and colleagues at Ag Canada,” she says.