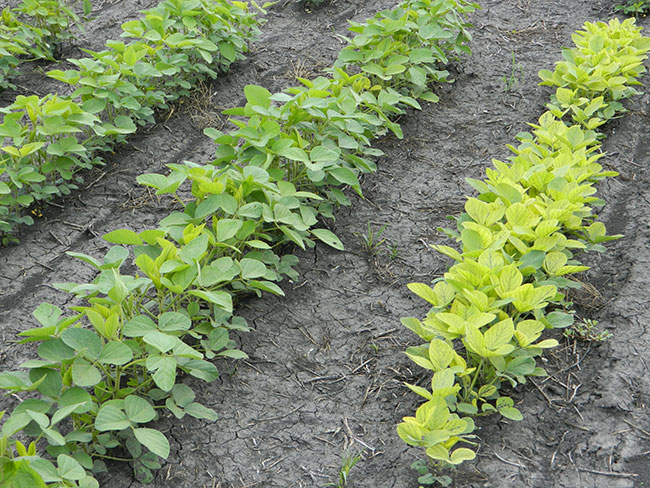 Iron deficiency chlorosis can be a production challenge on the Prairies. Photo courtesy of Dennis Lange.

Why are my soybeans yellow, and is that a concern? Iron deficiency chlorosis (IDC), better known as “yellow soybeans,” could be the issue.

“The yellowing over of soybean fields, caused by iron deficiency chlorosis, is a common occurrence in late spring, and is a production challenge that reduces yield in Manitoba and throughout the Prairies,” says Kristen MacMillan, research agronomist in soybean and pulse crop agronomy and cropping systems at the University of Manitoba. MacMillan leads the Soybean and Pulse Agronomy team, a collaboration between the Manitoba Pulse & Soybean Growers and the University of Manitoba, which focuses on soybean, dry bean and pea agronomy and cropping systems.

Although iron is abundant in Manitoba soils, factors such as calcium carbonate content, salinity, nitrates and available moisture can prevent the uptake of plant-available iron (Fe) by soybean plants, leading to yellowing, specifically interveinal chlorosis, of upper foliage. The condition typically occurs during the early vegetative stages following rainfall, and can persist from days to weeks. Generally, with more severe symptoms and the longer they persist, greater yield loss is expected. Variety selection is the most effective option, as in-season rescue options with foliar Fe application have proven ineffective as Fe is unable to translocate within the soybean plant.

To help farmers and agronomists choose varieties with IDC tolerance, Manitoba Agriculture (MA) co-ordinates an annual variety evaluation trial; MacMillan’s research team started harvesting the trial in 2017. Each year, 80 to 96 varieties are seeded in one-metre rows with three replicates on an IDC-susceptible site near Oak Bluff, Man., that is very high in calcium carbonate.

As part of these trials, each row is evaluated in late June for an IDC score according to a scale that ranges from one to five, with low score having a greater tolerance to iron chlorosis. At harvest, the rows are hand-harvested for yield and correlated to IDC score.

Impact of IDC can be high
Over the four years from 2017 through 2020, the effect of IDC on soybean yield varied depending on the year, as severity and duration of symptoms varied.

MacMillan found that in two out of three years, a significant linear relationship between overall IDC score and soybean yield was determined. For each one-unit increase in IDC score, soybean yield was estimated to be reduced by 24 to 28 bushels per acre. Over the years, the IDC scores have ranged between 1.5 and 3.0, so a one-unit change can have a large impact on yield.

“Another way to look at this data is that, for each 0.1 unit that IDC score increases, soybean yield is reduced by 2.4 to 2.8 bushels per acre,” MacMillan says. “In a field where IDC occurs, a variety rated 1.7 would be expected to yield nine to 11 bushels per acre more, on average, than a variety rated 2.1 in IDC-affected areas.”

These Manitoba results suggest greater yield loss from IDC compared to values reported by David Franzen and R. Jay Goos at North Dakota State University. In North Dakota, yield loss associated with IDC was estimated at nine to 19 bushels per acre per unit of chlorosis at the five- to six-leaf stage, depending on the year. The difference, though, could be related to the range of subjective IDC scores assigned by evaluators.

This is the first time yield loss associated with IDC has been quantified for the Prairies. But there is more work to do, MacMillan says, like considering the variability related to variety performance and when and where IDC occurs. IDC is highly variable within a field and from year to year. She says the study years of 2017 to 2021 have been drier than normal in Manitoba and IDC has not been a major production issue compared to 2013 to 2016. In a survey of 53 farmers and agronomists, the frequency of IDC occurring varies from every year to one in four years. When IDC does occur, the majority responded that only 10 to 25 per cent of a field is affected. “This spatial and annual variability makes precision management both an opportunity and challenge,” MacMillan says, adding that she has begun evaluating variety performance under both IDC and non-IDC conditions in order to determine the potential for site-specific management within fields.

The best management practices currently available remain soil testing for carbonate and soluble salt levels. If the field risk is high, select a tolerant, high-yielding variety. It is a simple and very effective management choice.