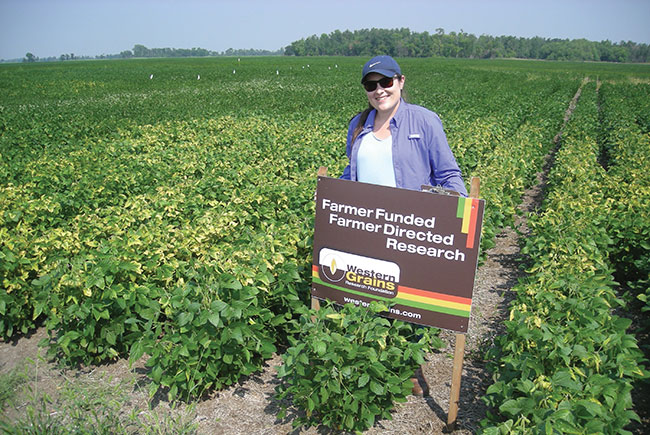 Over the past few years, reports of soybean potassium (K) deficiencies in Manitoba have been increasing. At the same time, soybean acreage and improvements in genetic yield potential are also increasing. However, K fertilizer recommendations for soybeans have not been updated for many years due to the lack of comprehensive research on potassium fertility for soybean production in Manitoba.

“With the recent dramatic increase in soybean acreage in Manitoba, there is a need to be concerned about removal rates of K compared to other crops in rotation,” explains Don Flaten, professor at the University of Manitoba. “Soybeans remove large amounts of potassium from the soil, and as acreage expands we are trying to develop updated fertility management strategies. Over the long term, understanding K removal and updating the current fertilizer recommendations is important, not just for soybean crops but also across the whole crop rotation system. Therefore, we set out to try to answer some questions about potassium rates and placement in soybean but so far we are being challenged by the research results. Our initial straight forward project is turning out to be much more complex than anticipated.”

A two-year project was initiated in 2017 including small plot trials at four sites in Manitoba on fields with low spring soil test K and also on-farm trials. Researchers set out to determine the frequency of soybean yield response to K fertilizer across a range of soil test potassium levels and soil types, and to assess the effectiveness of different combinations of potassium fertilizer rates and placements for increasing soybean seed yields. The combination of treatments in the small plot trials included untreated plots compared to plots with 30 or 60lb K2O/ac sidebanded and plots with 30, 60 or 120lb K2O/ac broadcast and incorporated. All small plots were planted at 30-inch row spacing.

“When we first started the project, we thought it would be much easier to find a responsive site to pull out the differences between combinations of rates and placement in the small plots,” explains Megan Bourns, University of Manitoba graduate student and project lead. “However, so far we are struggling to find any yield responses in both the small plot trials and the on-farm trials. In 2017, we took comparative samples between treated and untreated plots, including samples from untreated locations with K deficiency symptoms, and we still had difficulty finding any yield response. This is quite surprising, as the plots were selected to be on soils considered to have quite low soil test K. What we did learn is how spatially variable K is across the field, which may be impacting our ability to predict a K response. We also had very dry growing conditions over both years of the project, which limited our yields and may also be impacting our outcomes.” 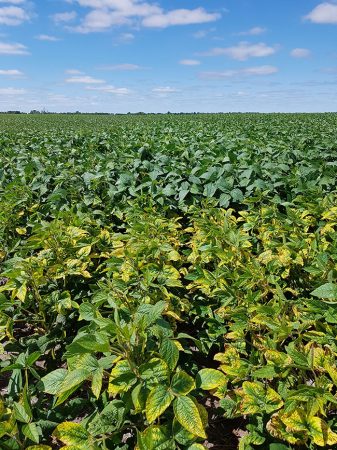 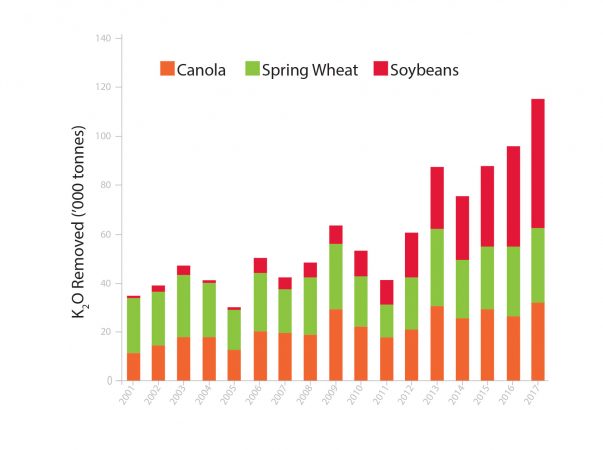 The small plot trials were conducted in collaboration with the Manitoba Pulse and Soybean Growers. “With the high removal rates of K by soybeans (1.1 to 1.4lb K2O/bu), we knew it was important for growers to keep an eye on K levels in their soils,” says Greg Bartley, on-farm specialist. “Although K has tended to be a forgotten nutrient, particularly on heavy textured soils with a good abundance, K is on the radar for a lot more growers now. We conducted on-farm trials for two years, starting in 2017.”

Growers had two opportunities to set up a trial depending on their operation and equipment capability. The on-farm trials compared untreated and treated strips, either a broadcast and incorporated treatment of 120lb/acre K2O, or a band application of 60lb/acre K2O. In addition to the harvest data collected for each entire strip, paired soil and plant samples were collected along treatment strips to determine the level of soil K and plant K uptake at mid-season, as well as seed yield at maturity. Overall, the results from the on-farm sites in 2017 didn’t show much of a response at most of the sites. Although there were two that showed positive results and two with negative results, the research does not show any clear reason for these responses.

“We repeated the experiment again this year, although we had fewer locations so will have a bit more of a limited dataset for 2018 results,” Bartley adds. “So far in 2018 we have seen some fairly significant visual symptom differences between treated and untreated strips, but we do not yet have any harvest data to determine whether or not there was a yield difference. This is the final year of the on-farm trials under this project, so once we see the final results we will then decide what the next steps might be. Even if we don’t see a response for some reason, we need to see how K levels affect the fertility of other crops in that rotation and look at the whole cropping system. Although we don’t have a formal experiment as this time, we are keeping an eye on the crops following the on-farm trials from 2017.”

Bourns adds that so far, the results from both the small plot trials and the on-farm trials ended up raising more questions than answers. The results from the 2018 plots are not yet available. “The responses to K in the 2017 on-farm trails were infrequent and unrelated to soil test K, and in the small plot trials there was no significant K response at any site. One of the questions is whether soils may be releasing more K than first thought so the soybean crops don’t need to rely on K fertilizer applications as much. Or is it just a soybean crop ‘thing,’ similar to the challenges of getting a response with phosphorus (P). The other question that comes up is with the variability we are seeing across the fields with K deficiency is, does it pay to fertilize the entire field or only deficient patches?”

Another aspect of the project was to investigate the capacity for Manitoba soils to retain applied potassium in non-exchangeable forms that might not be available to crops. “The early results of this project emphasize the need to find a way to better understand K dynamics and how soybeans interact with K fertilizer,” Bourns says. “We also need to quantify how much K is actually bioavailable over the course of the growing season.” In 2018, Bourns also had plots comparing K responsiveness of soybeans with barley; however, the results are not yet available.

“Soybeans and their response to K and also to P based on some previous research is not as simple as we first anticipated,” Flaten says. “The question remains does the soybean root system have the capacity to take up more K than other crops, similar to the results of our P trials where soybeans continued to yield very well even on extremely low soil test P levels and not respond to fertilizer. For now growers will have to continue to rely on the current soil test recommendations for K until we have better information. Crop scouting is extremely important to understand deficiencies and variability in fields. Growers who have loam or sandy soils with low soil test K levels could consider incorporating test strips for their own on-farm trials to evaluate K responsiveness of their particular soils and growing conditions. Stay tuned for more research, hopefully under better moisture conditions and a more typical growing season, so we can focus on the limitations of fertility and see more clear results.” The project was funded by the Manitoba Pulse and Soybean Growers, the Western Grains Research Foundation and Nutrien.