Which practices are best for increasing corn yields and reducing phosphorus losses? 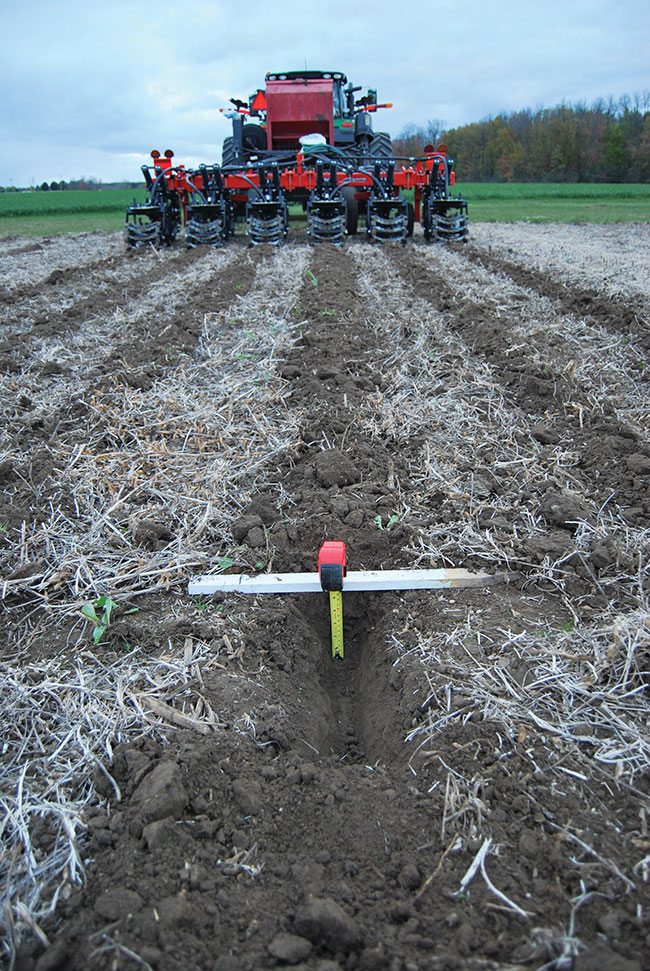 Corn growers often have questions around fertilizer placement with strip tillage like: How does strip till-placed fertilizer compare with a conventional tillage system where the fertilizer is broadcast and then incorporated? Does it matter whether the strip till/fertilizer operation takes place in the fall or the spring? Which system produces the highest corn yields? Which system is best at minimizing soil erosion and nutrient losses?

Corn specialist Ben Rosser is leading a three-year project to find some answers to these questions.

He explains that strip till has the potential to offer some of the benefits of no-till along with some of the benefits of conventional till. In strip till, you are only tilling about a third of the field, just the rows where you will be planting corn. So the rest of the field has a crop residue cover to protect soil quality and minimize soil and nutrient losses. The strips tend to be warmer and drier than a no-till field, which can help the crop get off to a better start. Strip till may have lower fuel costs compared to a conventional till system. And strip till can be a good option for applying fertilizer.

“Strip tillage gives you the ability to incorporate fertilizer right into the strip, while also using a conservation tillage system. No-till has a lot going for it, but one drawback is that you are almost stuck with broadcasting fertilizer that you can’t band with the planter,” says Rosser, who is with the Ontario Ministry of Agriculture, Food and Rural Affairs (OMAFRA).

“Strip tillage gives you the ability to incorporate fertilizer right into the strip, while also using a conservation tillage system.”

Rosser’s project is focusing on phosphorus losses under various tillage/fertilizer systems because excessive phosphorus levels in water bodies can result in serious water quality problems such as algae blooms.

Upswing in strip till uptake

However according to Rosser, strip tillage adoption is growing in the province. “In the last five or 10 years, there has been a fairly big increase in the number of corn acres that are strip tilled and a lot of interest from growers.”

“In the last five or 10 years, there has been a fairly big increase in the number of corn acres that are strip tilled and a lot of interest from growers.”

He sees a couple of reasons for this increased uptake. “One thing is that many crop producers now have GPS and autosteer on their tractors, whereas few if any producers did 20 years ago. Being able to stay in straight lines and to plant into the strips that you have already made really make strip tillage go a lot better.

“The other thing is that a wider array of equipment companies are making strip tillers these days. The machines are more sophisticated and may do a better job in creating a well-tilled, residue-cleared strip that you can plant into, compared to some of the first strip till equipment available 20-plus years ago.”

From what Rosser has seen, whether strip tillage is done in the spring or the fall depends on the grower’s specific situation. “There are benefits to both systems. One of the benefits of fall strip till is the potential to reduce your spring workload. For instance, some growers strip till in the fall and then stale-seed the strips in the spring, so they don’t have tillage to slow them up in the spring,” he says. One advantage with spring strip till is that the strips have less time to be at risk of erosion than fall-tilled strips.

“However, for most growers, I think the biggest factor in the choice between spring and fall strip till could be soil texture. Growers on heavier soils tend to do strip till in the fall because they are worried about the risk in the spring of bringing wet, lumpy soil to the soil surface and the difficulty in making a good seedbed out of that. Growers with loamy to sandy soils could probably do either fall or spring strip tillage; the ones that we have talked with or worked with tend to lean more towards doing spring strips.” 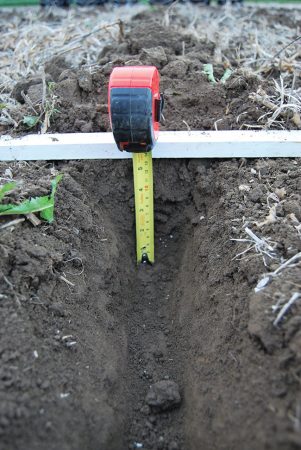 In the field trials, the strip tiller is applying the fertilizer at a depth of about four inches. Photos courtesy of Ben Rosser.

The aim of Rosser’s project is to assess the effects of various tillage/fertilizer timing and placement options on corn yields and phosphorus losses.

The project, which runs from fall 2018 to December 2021, is taking place at four sites. Two are at the University of Guelph’s Elora Research Station, with one site on cereal residue and the other on soybean residue. The third site is at Drumbo with an on-farm co-operator, and the fourth is at the Perth County Soil and Crop Improvement Association’s demonstration farm at Bornholm.

The other two main treatments are comparing fall fertilizer placement options: a) strip till-placed fertilizer; and b) broadcast fertilizer incorporated with conventional tillage.

In these four treatments, Rosser is applying 60 pounds of phosphorus and 60 pounds of potassium per acre, which are the corn crop replacement levels for these two nutrients. The strip tiller applies the fertilizer in a band at a depth of 4 inches.

“Then, where I can fit it in, I am also looking at the yield response to planter-placed starter fertilizer in place of strip till-placed fertilizer,” Rosser says. For these starter treatments, the planter applies 60 pounds of phosphorus and 60 pounds of potassium per acre in a 2 x 2 band (2 inches over and 2 inches down from the seed) into strips that have no strip-till placed fertilizer.

These starter treatments are building on some earlier OMAFRA research. “My predecessor Greg Stewart did a fair amount of strip till fertility work. Some of the early strip tiller designs had shank-type fertilizer units where the fertilizer goes down the shank of the strip tiller. In his work, Greg showed that if the fertilizer is deep-placed to the bottom of that shank [6 inches deep], it is good from a fertility perspective, but you may lose the starter fertilizer capability because the fertilizer may be too deep for the plants to access it early in the season when they really need it. Greg’s work showed there was a still need to apply starter fertilizer with the planter under that scenario, when soil test levels were low.”

“In his [earlier] work, Greg showed that if the fertilizer is deep-placed to the bottom of that shank [6 inches deep], it is good from a fertility perspective, but you may lose the starter fertilizer capability because the fertilizer may be too deep for the plants to access it early in the season when they really need it.”

Rosser’s project is using a strip tiller with a fertilizer delivery system that can be adjusted independent of the shank depth, which allows shallower fertilizer placement.

Rosser and his team are measuring corn yields from the different treatments, and they are capturing the surface runoff from the treatments to determine the phosphorus levels in the runoff.

“This fall we’ll get our first set of yield results. I won’t be making any big conclusions from one year’s results, but perhaps we’ll get an early indication if there is consistency across our trials,” he says.

Rosser says, “We’re optimistic on strip till; we like the benefits it offers. So our goal is to do what we can to help figure the system out and provide more information for growers to have more success.”

This is a Grain Farmers of Ontario-funded project with matching funds through the Canadian Agricultural Partnership, a federal-provincial-territorial initiative. The Agricultural Adaptation Council assists in the delivery of the Partnership in Ontario.