A three-year research project with the goal of streamlining dry bean breeding projects shows promising developments that could lead to significant increases in yield for dry bean crops. 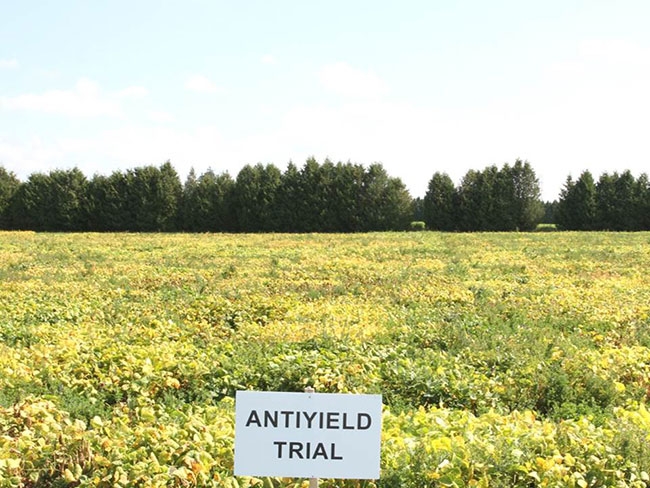 Replicated field trials of all of the 121 varieties in the antiyield/yield trial in Elora A three-year research project with the goal of streamlining dry bean breeding projects shows promising developments that could lead to significant increases in yield for dry bean crops.

Research work being done by K. Peter Pauls, a professor with the department of plant agriculture at the University of Guelph, and his team – PhD research associate Yarmilla Reinprecht and technician Tom Smith – has uncovered new information on yield/anti-yield gene alleles in dry bean. The project is a joint effort between the Ontario Ministry of Agriculture, Food and Rural Affairs (OMAFRA) and University of Guelph.

A gene discovered
When the project first started, no one was even sure this gene existed in bean. It was based on a discovery by researchers at the University of Guelph, including PhD student Fariba Shahmir, who showed that a gene in canola influenced yield in Arabidopsis thaliana, a model plant widely used in plant molecular biology research. From there the focus moved to soybean and dry bean.

The aim of the OMAFRA-funded research is to test the correlation between yield and the expression of this gene in a large collection of 121 bean varieties and develop a gene-based marker to rapidly test for alleles associated with high yield.

Pauls says there was skepticism when the project first started because so many factors contribute to overall yield.

“Yield is generally attributed to the action of many genes with small effects, distributed throughout the genome,” he explains.

The project looked to identify alleles, or the forms of the gene, that might be associated with yield.

“This gene has a strange name – yield/anti-yield,” he says. “Most often we look for an upregulation of a gene. But in this case, the yield effect is related to a form of the gene that has a lower level of expression than normal. The effect we’re searching for is higher (increased yield) if the gene is turned down.”

Previous research
Previous work done with different plants, particularly Arabidopsis – the white rabbit of plant molecular biology, because it is a small plant with a short life cycle totalling six weeks from seed to mature plant – led to a lot of gene discovery work.

“When we over expressed, or turned up the activity of the anti-yield/yield gene, we saw lower seed production and lower pod production,” Pauls says. “Generally, the overall plant size and mass was reduced if it was over expressed.”

However, when the researchers supressed the activity of the gene, they noted plant vigour, pod number and seed number also increased.

Pauls says the researchers wondered if a similar gene existed in beans. Yanzhou Qi, an M.Sc. student, uncovered a very similar gene in the bean genome and found that its expression in leaves of ten different bean varieties was negatively correlated with their yield. However, the type of experiment they did with Arabidopsis couldn’t be performed with bean because it is not as easy to transform.

“We did a much larger correlation study and asked if there is any connection between forms of the gene [alleles] in bean and yield,” Pauls says.

The researchers did two years of field work with 121 bean lines evaluated in replicated trials at two locations (Elora and Woodstock, in Ontario) in 2015 and 2016. The evaluation of the lines for yield and a number of yield-related traits showed there were significant associations between yield and yield-related traits in various regions of the bean genome, including a region that contains the homolog of the yield/anti-yield gene.

“What’s unique here is to have a gene show significant effect on yield,” Pauls says. “Ten to 20 per cent of the variation in yield among the 121 lines that we measured in the field was due to the activity of this gene. That doesn’t feel huge, but typically a breeding program goal in most field crops is to achieve an increase in yield of one per cent per year across all field crops.”

Moving forward
Since the researchers now have knowledge of the gene, they have the molecular markers to help them select the plant with different forms of the gene. The focus of the research will now move to applying that information to identify lines in breeding populations that have the desirable form of that gene.

“We can focus on lines with those markers we think would have yield advantage,” Pauls explains. “We have about 15,000 plots of lines at various stages in our breeding program; it’s a numbers game.”

The question about why a plant would have an anti-yield gene is unclear. Pauls theorizes it may be involved in mediating a stress response.

“The plant senses drought stress or heat stress and sets up a response to prevent growth, to give the plant a metabolic break,” he says. “Some plants have a form of the gene that leads to a strong conservation response, while other plants have a form that is not as responsive and puts the plant at some risk during the stress, but if they survive, they are ahead developmentally because they didn’t shut down their metabolism and impact yield.”

This is the final year for the OMAFRA grant; Pauls says the next steps are to file a report and carry on with the research.

And with these markers identified, Pauls says they’ll help other researchers in terms of selection studies, especially considering that yield is the first criteria that any plant breeding program must address.

“The first hurdle is yield. Then we look at other traits to give value,” he says. “This work feeds a plant breeding pipeline and I hope it is of benefit to Ontario producers. Dry bean is the largest legume consumed by people, so it has implications.”