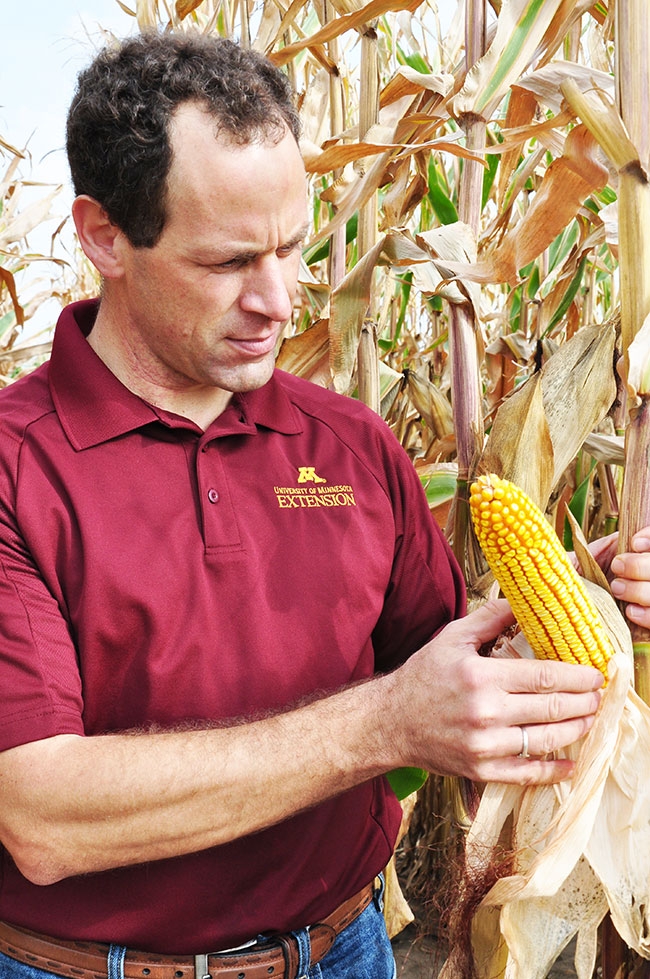 Fernandez is an associate professor of nutrient management and water quality. Along with colleagues, Fernandez has been conducting research to better understand the nitrogen cycle in several Midwest and northern Great Plains states.

Like most, Fernandez believes in feeding the crop enough for its needs, but that’s it.

“There are so many variables that impact the potential for nitrogen loss that it is difficult to say a blanket statement about how much is being lost. The main two ways are through volatilization and leaching,” Fernandez says.

Application timing has been a special focus for Fernandez. He has also focused on how the source of N will affect productivity and loss.

Application timing
The nitrogen package can be applied all at once in the fall or in the spring ahead of planting. However, split application is a third and popular option, usually promoted for targeting the growing crop according to its need.

“We have been doing quite a bit of work to see whether it really works – and what I have seen is that it actually doesn’t [work] as much as you would expect,” Fernandez says. “It’s very rare to see a benefit, or a substantial benefit, in splitting nitrogen versus applying it before planting. The only situation where we see consistent positive results from a split application is in sandy soils. In those soils, the potential for leaching loss is really high. In those conditions, we do see a consistent benefit to split applications. In all of the other situations, in finer textured soils, we don’t really see that.”

Most nitrogen loss occurs in spring, between early April and about mid-June. The loss occurs as the soil is warming up – leached out first by melting snow, then by spring rains.

During these ideal conditions for nitrogen loss, the new crop may not be growing yet, or underground, the root system is small and the crop doesn’t require a lot of nitrogen.

“If the crop doesn’t need much N early in its growth and if that’s when we have the most loss, it seems very reasonable to apply most of the N later in the season, after the highest loss potential and before the plants really start to take up a lot of N. That’s the concept,” Fernandez says.

Proof of concept testing for this was carried out recently in eight Midwest states: Missouri, Iowa, Minnesota, North Dakota, Nebraska, Wisconsin, Illinois and Indiana, at approximately 16 field sites, for three years for a total of 49 site-years. All the sites were in corn production and conventional tillage. Five were continuous corn; 44 were corn after soybeans. At each of the 49 sites, one set of plots had the full N package applied before planting. In the remaining plots, the N application was split. Some had 40 and others 80 pounds of starter N followed by the rest of the package at V8/V9.

In addition to those studies, in Minnesota, other research collected 15 site-years of data, looking at best timing for split applications with a full N package at pre-plant and others with 40 pounds of starter with the rest of the package at one of the following corn stages of development: V2, V4, V6, V8 or V12.

Based on these two large studies, “On the fine textured soil, for the most part there was no difference,” he says. “In a few locations we saw a yield reduction when you waited too long to apply the nitrogen. At V8 or V12, in drier conditions, we saw yield reductions with late-stage split applications. Inevitably, that N never really made it into the root zone in time for the plant to take advantage of it.”

In some plots, the last application of nitrogen was applied even later, at R1 or silking time. It was too late; the yield potential already was reduced.

“The plants looked very nice and green, but the stalk diameter was smaller and the plants were shorter. Those plants were not able to catch up with plants that had early, adequate nitrogen. This is a really important point about split applications. We split applications to reduce the risk of losing N. The other potential risk is that, in delaying too much, the plants may not be able to use it,” he says.

As a general rule, according to Fernandez, it makes no difference to yield whether the nitrogen is all applied pre-planting or side-dressed in split applications before V8.

The exception to the rule, however, was on sandy soils and in a few situations where fine-textured soil had excessive (record breaking) precipitation after pre-plant applications and before plants were taking up a lot of N.

At the end of each season, Fernandez collected soil samples to see how much nitrogen was left in plots after the different timings for application.

“Fairly consistently, we saw that the split applications have greater residual N than the pre-plant applications, [which] means the plant did not use the nitrogen. Then, going back in spring at some sites, we did a follow up. That residual N was lost, although in dry conditions you had a better chance of that N sticking around for the next growing season,” he says.

With that information, Fernandez has one issue that’s confusing the results. While the end-of-season testing shows less nitrogen remaining in the full-treatment pre-plant application, the reason can be debated.

“We don’t really know if some of that N is lower because it was lost earlier in the season. That’s a conundrum,” Fernandez says. “Maybe we lost some of that N early. Or, on the plant uptake, maybe the split applications help the plant get a little more N without it being used to produce more yield. The plant may pick up more N and cycle it back into the soil.”

His conclusion now for application timing on fine textured soils is that either way, pre-plant or side-dressed, will be fine in terms of yields and in minimized nitrogen loss.

Sandy soil difference
On the other hand, Fernandez has a very different conclusion on application timing options for coarse-textured sandy soils.

“No question, use a split application. On sandy soil, that will be a consistently better management practice than a pre-plant application,” he says.

“Typically, even if it rains, you can still get into the field quickly if it has sandy, well-drained soil. What I have been doing – and it seems to work very well – is to apply a small first dose of N around V2 so the plants have some N to get going. Then I wait to apply at V6 and once more, even later, to keep the corn at maximum yield potential.”

At V6 and later, he said, corn is strongly pulling nitrogen and water out of the soil. It is typical to see significant rains in late June and into July, but leaching isn’t a problem at this stage.

“In June or later, the plants are soaking it all up and nothing really gets leached,” he says. “So, that split application at V2 and later really would be the best for sandy soils.”

If a farmer really wants to do a pre-plant application, Fernandez says to apply a polmer-coated urea but not at the full rate.

“An early small amount, say 40 pounds of N, will help the crop get some of the N it will need later.”

Timing and types of N
Fall fertilizer applications are considered to be generally less efficient than spring applications but there are good reasons for the practice, even though more N can be lost.

On the science side, some things are fairly consistent. Fall applications should not be done at all on sandy soils, and preference should go to spring applications.

“Generally, for fall applications the probability of having a yield reduction and nitrogen loss is greater than for a pre-plant spring application,” he says.

For Western Canada, the nitrogen source is very important in the fall. In spring, the source of nitrogen doesn’t matter as much when it’s applied just before planting.

“If you use UAN, 25 per cent of that is already nitrate so the potential for loss is greater the moment you apply it in the field,” he says. “In Minnesota, we suggest using only ammonia as the N source for the fall. Toward the West and North, where it gets dry in winter and early spring, urea is also an acceptable N source.”

If anyone on the Prairies uses dry fertilizer, at any time, volatilization losses will be high unless it is quickly incorporated.

Blended treatments
Introduction of the coated urea prill has changed the equations somewhat as to timing and nitrogen loss for farming operations. Coated urea fertilizers delay the release of nitrogen from prills with soluble chemicals such as sulfur, polymers and combinations.

“I’ve seen it work well with pre-plant applications, because it is protected from loss during those wet periods early in spring,” Fernandez says. “It has worked well for us.”

However, he would not recommend using it for a split application.

“Using polymer-coated urea in split application at side-dress timing, we have seen some yield reductions,” he says. “You want to apply something the plant can use right away, rather than in three or four weeks. It will release eventually, but starving the plant for a while is setting it up for lower yield potential. And, if the conditions turn dry, the release would be even slower.”

On the other hand, mixing a coated urea and conventional urea does have potential. Fernandez has studied this method, using different ratios on fine textured soil.

“I’ve seen a ratio work well for fine textured soil. If you do an early application, you could do a third urea and two-thirds ESN, or half and half. I suggest those ratios because of cost, mostly. The coated urea is more expensive, but it can save a need for a second field trip,” he says.

The scientist also worked with ratios for sandy soils using pre-plant applications. He has studies with urea-only, ESN-only, and ratios between. The lowest yield was achieved with urea-only, and the highest with ESN-only.

“We saw a steady increase in yield for using ESN. The more ESN you have in the mix for pre-plant, the better,” he says.