A team of researchers led by University of Guelph plant scientist and professor, Karl Peter Pauls, recently completed a three-year research project to tackle one of Ontario’s most costly bean diseases: anthracnose. 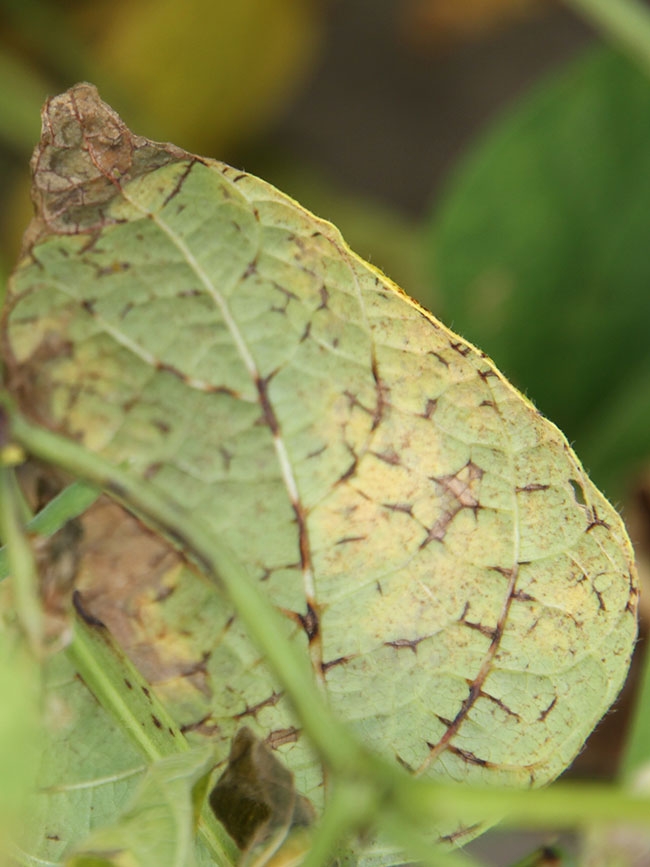 Anthracnose disease symptoms on a bean leaf. A team of researchers led by University of Guelph plant scientist and professor

In addition to monitoring the spread of anthracnose’s fungal pathogen across Ontario, the project’s goal was to develop high-yielding bean germplasm with durable (multi-gene) anthracnose resistance as well as resistance to both common bacterial blight and bean common mosaic virus in a range of market classes and maturity groups.

Anthracnose is a potentially devastating seed-borne disease that can affect the yield and quality in all classes of beans. The disease results in poor seed germination, reduced seedling vigor, lower yields and – because of the disease’s characteristic dark spots on harvested seeds – marked reductions in a crop’s quality rating and marketability.

“Bringing seed grown in Idaho back to Canada is costly and you don’t always know if you’ll be able to get it in a timely way,” Pauls says. “In the long-term, it might be a possibility to bring more of the seed increase steps back to Ontario. If we have effective control against seed-borne disease, that would be a real improvement for producers.”

Pauls, postdoctoral researcher Raja Khanal and technician Tom Smith began by monitoring the spread, virulence, and specific races of the Colletotrichum lindemuthianum fungus, the pathogen that causes anthracnose, across Ontario.

“It’s a very specific reaction between the unique fungal race and the gene that exists in a plant which gives you susceptibility or resistance,” Pauls says. “For this particular disease, we have a classical gene-for-gene disease interaction between pathogen and host plant. It means that it is possible for the pathogen to mutate somewhat so that the plant’s defense systems can no longer recognize it. That’s what we’re watching for.”

Pauls’ research group analyzed samples collected from bean cleaning facilities in order to test for disease from areas across Ontario. The good news is that a single race of fungus – race 73 – is the dominant and, hopefully, exclusive race currently in Ontario.

“We expected and hoped that it would be only one race because if there is another one starting to appear then the genetic material we’re working with may no longer be resistant. The overall view of the screening we did was that we didn’t detect another race,” Pauls says.

“Until now, we think the source of [anthracnose] resistance has been similar to what Bolt has, which carries a gene for resistance on chromosome 1,” Pauls says. “Ultimately we would like to understand what we’re manipulating at the gene level, to be able to know that the mechanism of resistance is attributable to a specific gene. We’ve been able to localize the region in the genome responsible for anthracnose resistance with much more precision than in the past. Getting to that level of understanding is gratifying and interesting from a scientific standpoint and important to moving forward.”

CBB is endemic to all bean growing areas of the world. Because widespread spaying of antibiotics is not permitted, the disease cannot be successfully controlled except via genetic resistance. Genetic resistance is the only option for viral diseases like BCMV.

While multiple breeding programs worldwide are simultaneously attempting to incorporate CBB resistance into new cultivars, Pauls says Canada’s researchers are among the leaders of the charge.

“We’ve been doing this for longer than many. We have good experience with finding sources of resistance for CBB that seem to be holding up,” he says. “Bacterial pathogens don’t have the same race structure as fungal pathogens, so we don’t have the same gene-for-gene interaction as fungal resistance. But in both cases we would like to have multiple resistance sources in our breeding material so over time they’re able to withstand slight variations in pathogens.”

Pauls points out that progress done throughout this project is only possible because it builds on efforts of the past. In previous years, Pauls’ breeding program produced multiple lines of CBB resistant cultivars, including OAC Rex, Rexiter and Lighthouse.

“We’ve made a lot of progress for CBB. Most lines released in the last 10 years have CBB resistance,” Pauls says. “Because plant breeding is a legacy game, you don’t go through material in a year or even three years. The crosses we are releasing now have a history of at least five to 10 years.”

Fourteen lines from Pauls’ recent project showed promise for anthracnose and CBB resistance in early testing and trialing. Most of these lines were also carrying molecular markers for BCMV resistance as well.

Currently, the research team is reviewing data from each line in order to choose which to send forward to provincial trials. To be supported for registration lines must meet a host of criteria. Not only must they prove resistant, they must meet or exceed check varieties’ yield, prove successful in processing and utility tests, and offer multiple physical and agronomic attributes including correct plant architecture, appropriate size of seed, and good standability.

It is too early to guess whether any of the lines Pauls is currently working with will ultimately reach commercialization. Even if they do not, however, every bit of knowledge gained and every resistant line produced is an important step in the right direction, says Pauls.

“We hope these are big steps towards durable resistance. Ultimately, the point of this work is to help make farming a little more secure.”

While the funding for this project concluded in October, 2017, Pauls says developing anthracnose resistance remains a key priority for Ontario’s bean industry, with ongoing support by the Ontario Bean Growers, the Pulse Cluster program through AAFC and the Ontario Ministry for Research and Innovation.