Innovative research is shedding new light on grain filling in oat, including the oft-overlooked occurrence of unfilled kernels. The research has overturned some common assumptions about oat grain filling and is opening the way to faster development of higher yielding and better quality oat varieties. 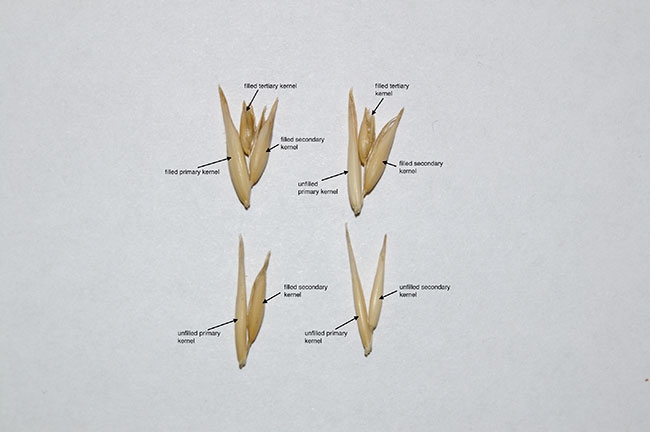 Art McElroy, research co-ordinator at PhytoGene Resources Inc., is leading this research. He has been interested in improving oat grain fill for a number of years. “I was intrigued by the fact that an oat variety might yield 6,000 kilograms per hectare in one location, but only half that in another environment. What yield parameters were changing? What stresses could be causing these differences? Was there genetic variability for stress resistance?” he says.

“The other big question was whether oat breeding could be much more effective if we had a better understanding of the dynamics of grain fill and the stresses that could be causing differences among lines.”

Highlights of findings so far
Since 2014, McElroy has been conducting a series of studies to intensively examine oat grain fill using a novel approach: analyzing individual oat panicles.

“The first study involved determining the pattern of grain fill in plants from different genetic backgrounds in our breeding nursery. Each kernel in the panicle was weighed very precisely and its position within the panicle recorded: panicle node, branch from each node, position on that branch, and whether the kernel was primary, second or tertiary,” McElroy explains.

“No study of this sort had ever been reported for oat, and it revealed many surprises.”

One surprise concerned the relationship between the number of kernels and kernel fullness. “The number of kernels set was the most important determinant of yield, but there was no negative correlation between kernel number and average kernel size. Some plants with the most kernels also had the largest kernels,” he notes.

“The biggest surprise though was [related to] a phenomenon that has largely been ignored in oat: the presence of unfilled kernels. These are empty hulls with only rudimentary floral or groat development. They are usually dismissed as kernels that the plant could not fill due to stresses during the grain fill. However, we found that unfilled kernels can appear anywhere within the panicle, which flowers and then fills from the top down, so their presence is not related to stress during grain fill,” McElroy says.

“The proportion of unfilled kernels was found to vary from less than five per cent to over 80 per cent, depending on genotype and environment. This is the second most important factor affecting yield – a huge surprise.”

McElroy suspects the important effect of unfilled kernels on grain yield may be related to the structure of the panicle’s plumbing system. It has generally been assumed that there is competition among kernels for carbohydrates, and also compensation: if one kernel is not able to fill, then its neighbours will benefit from the unused carbohydrates. Studies in the 1970s showed that if a primary kernel is removed, the associated secondary kernel will grow somewhat larger than expected. Carbohydrate partitioning among kernels was the obvious explanation.

But this is not the pattern seen with intact panicles, McElroy points out. There was little or no compensation between associated kernels (primary or secondary) if one was unfilled. A literature search, going back to the 1950s, offered some clues. It appears each kernel may have its own pipeline – a vascular bundle – that originates in the stem. So, kernels along a panicle branch do not draw carbohydrates from a shared carbohydrate pipeline, but each has its own independent food supply. Therefore loss of a kernel means loss of carbohydrate transport from the stem to a developing kernel, and a direct loss in yield potential.

McElroy and his team then studied grain fill pattern over time, using two oat varieties sampled at three-day intervals from heading to maturity. According to McElroy, “The data fit the ‘one pipeline per kernel’ model to a tee.”

A subsequent experiment assessed herbicide impacts on the frequency of unfilled kernels. Some British research from the 1950s had shown 2,4-D applications could result in more unfilled kernels. So the PhytoGene team evaluated the effects of a broadleaf herbicide (bromoxynil and MCPA ester) applied on 50 oat lines at two growth stages. They found some differences between the treated plots and the check plots, but those differences were genotype-dependent.

The next aspect to investigate was the effect of environment on the frequency of unfilled kernels and the interaction between different lines and environments. This was undertaken in 2016, with support from Grain Farmers of Ontario (GFO). The PhytoGene team evaluated kernel fill in 100 oat lines grown at three contrasting locations in the province: Cumberland (near Ottawa), Mimosa (near Guelph), and New Liskeard (Temiskaming Shores). Cumberland and Mimosa encountered record early-season drought. Yields at Cumberland were mediocre at best, while those at Mimosa would make the crop not worth harvesting commercially.

Interestingly, it was the number of kernels set and the level of unfilled kernels – an average of 81 per cent at Mimosa – that were most closely related to the yield differences among sites. In fact, the thousand kernel weight of filled kernels was slightly higher at Mimosa than at the other two sites.

The results confirm early-season heat and/or drought stress can increase the frequency of unfilled kernels. This effect occurs very early in the season when the panicle is being formed, well before heading. McElroy explains that the unfilled kernels can’t recover from this very early damage: “Even if you get good weather later on, they are not going to develop.”

Some of the oat lines were more resistant than others to those early-season stresses, so they had a lower frequency of unfilled kernels. The most resistant ones are now being multiplied for further testing.

“These findings changed our whole approach to oat breeding,” McElroy says. “We knew that the number of kernels set and their potential size are heritable traits and we have been selecting for those traits all along. But the frequency of unfilled kernels – also a heritable trait – is now a major selection criterion.”

McElroy and his team are now automating and mechanizing the panicle analysis process so they will be able to analyze tens of thousands of panicles by next year.

Current research
In a new project funded by GFO, McElroy is working on an initial evaluation of the potential for using molecular markers to screen for the grain fill parameters. Such markers could really improve the efficiency of screening for the traits.

He is collaborating on this project with the University of Saskatchewan’s Crop Development Centre (CDC). The CDC has evaluated 70 advanced oat lines for an array of 6,000 markers. This array identifies common variants in the oat DNA and their locations on the genome.

McElroy and his team are growing the 70 lines in replicated trials at Cumberland. They will analyze panicle samples to determine the grain fill parameters for each line and then attempt to find associations between marker presence and specific grain fill characteristics.

This technique is a fast way to get a first look at which markers could be associated with the grain fill parameters.

The alternative technique would be, for example, to find several closely related families that are breeding true for a high or low number of filled kernels and then do a detailed genetic analysis of those groups of families. McElroy and his team are collaborating with Céréla, a breeding company in Quebec, on this technique for marker development.

McElroy’s novel approach to investigating grain fill – examining the characteristics of individual panicles – is really paying off. His studies are increasing scientific understanding of oat grain fill and the stresses that influence it, as well as creating a more effective oat breeding strategy for PhytoGene. He adds, “Identification of molecular markers associated with enhanced grain fill would be icing on the cake.”

For oat growers, McElroy’s research could make a big difference. “This research should accelerate the development of higher yielding oat varieties, with more yield stability and much better test weight.”