Getting to the roots of global food security. 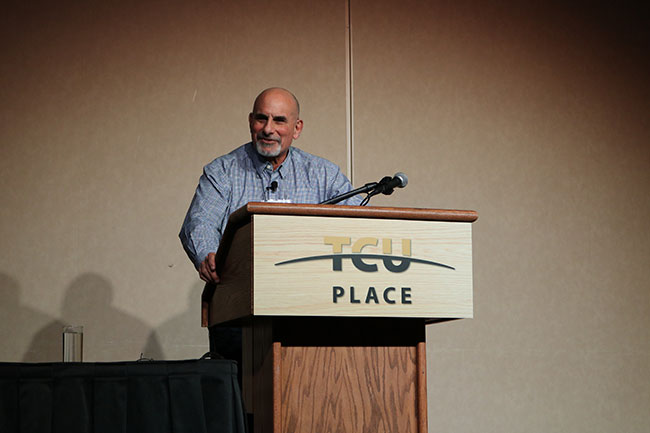 The Global Institute for Food Security (GIFS) is a public-private partnership that operates as an institute at the University of Saskatchewan with its own board of directors. Its research focus is to perform fundamental research generating information that can be used to deliver transformative innovation to agriculture in both the developed and developing world.

Within the root-soil-microbial interactions focus, the objectives include the use of genomic, genetic and systems biology research to improve root mineral/water acquisition efficiency, resiliency to other abiotic stress, and to reduce the carbon footprint through:

Developing sorghum Al tolerance
One success story addressed aluminum (Al) toxicity to plants that occur on highly acidic soils. These highly acidic soils are common across parts of South America, Africa, Russia and eastern North America. A symptom of Al toxicity is the inhibition of root growth that leads to severe yield reductions due to drought and nutrient deficiencies. 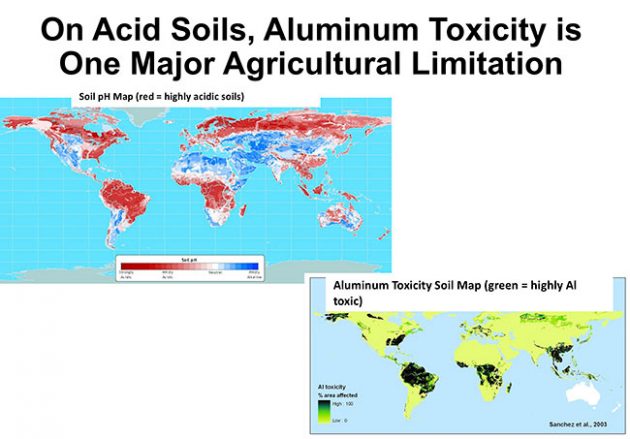 Dr. Jurandir Magalhaes identified that inheritance of Al tolerance was explained by the segregation of a single major locus. A gene in the multidrug and toxic compound extrusion (MATE) family confers that Al tolerance in sorghum. Marker-assisted breeding was used to introgress tolerant SbMATE alleles into Al-sensitive sorghum lines. Information on the Al tolerance gene was used for a molecular breeding pipeline for maize and sorghum improvements in Kenya, Mali, and Niger.

However, the SbMATE gene wasn’t enough to provide optimal Al tolerance. The genetic background of different sorghum lines resulted in different levels of Al tolerance. Analysis of sorghum’s genome looked at Al tolerance and SbMATE expression. Two transcription factors were identified, WRKY (SbWRKY1) and DHHC-type zinc finger (SbZNF1) on chr 9, that regulate SbMATE expression in a compensatory fashion. As a result, we are developing a molecular toolbox for sorghum Al tolerance combining Al-tolerant alleles of SbMATE, SbWRKY1 and SbSNF1 for more efficient and effective marker-assisted breeding of sorghum Al tolerance. 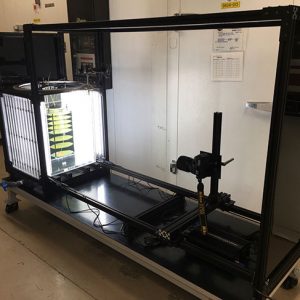 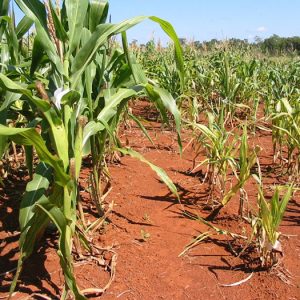 Improving phosphorus uptake
On acid soils, low phosphorus (P) availability and high soil P fixation is a second major agricultural limitation. The spatial distribution of roots in the soil, a trait called root system architecture (RSA), plays an important role in many root-based plant traits such as efficient acquisition of water and mineral nutrients under drought and mineral deficiency in soils.

Plants with good root architecture have more adventitious roots, basal root whorls, shallower basal roots, more taproot laterals, and longer, denser root hairs. Research by Dr. Hong Liao at Fujia Agriculture and Forestry University investigated the ideal RSA in soybean, and found that P-efficient soybean lines had a shallow, fibrous root system near the soil surface, where the majority of P is found in the soil.

Our research is developing sorghum varieties with improved RSA for low P soils. In fact, we have already had some improvement by just screening existing germplasm, but obviously this is not enough. We must have systematic improvement of soybean root traits, which can ensure stable adaptation to low P soils.

A 3D RSA imaging system, RootReader 3D, was developed that quantifies a number of different RSA and topology traits. This imaging system was used to identify sorghum lines with superior RSA traits. From these superior lines, Dr. Magalhaes has identified genetic markers that are linked to superior, more P-efficient genes, and has been able to pyramid several of these genes in sorghum to obtain significant (0.25 ton/hectare) increases in yield on low P acid soil field sites in Brazil. 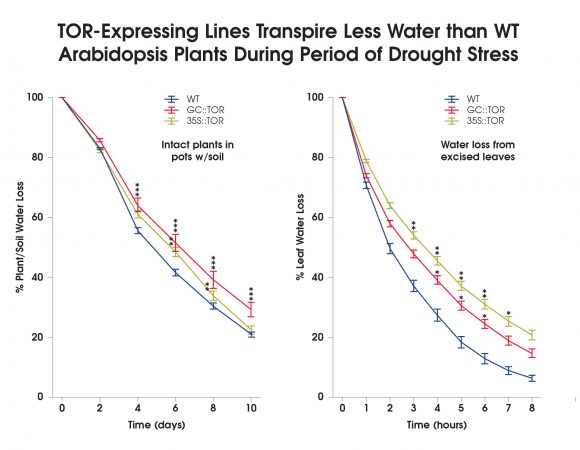 Our research has found that overexpression of TOR both in guard cells and throughout the Arabidopsis plant confers a significant increase in plant growth during drought stress. This increased drought resistance is due in part to reduced transpirational loss of water via leaf stomata. This was also associated with reduced stomatal conductance to CO2 into the leaf, which should have negatively impacted photosynthesis. Surprisingly, photosynthetic CO2 assimilation was increased in TOR overexpression lines. These findings demonstrate that manipulation of TOR genes in developing crops can enhance drought tolerance and water use efficiency.

On a closing note, the 8th International Crop Science Congress is planned for Saskatoon from June 21-25, 2020. This congress will address basic and applied aspects of plant and crop sciences as they relate to strategies to develop unique, sustainable, agricultural systems having the capacity to support animal and human health, on a global scale, while being mindful of our custodial responsibilities towards the well-being of our planet Earth.