The record-high levels of Fusarium head blight (FHB) on the Prairies in 2014 and 2016 underline how crucial it is to have more wheat varieties with improved resistance to this major disease. Breeding for FHB resistance is notoriously difficult, in part because many different genes are involved. So researchers are applying diverse approaches to obtain new resistance genes. Some researchers in Saskatchewan are using advanced technologies to tap into the variability in traditional wheat varieties that were grown and selected by farmers over many generations. 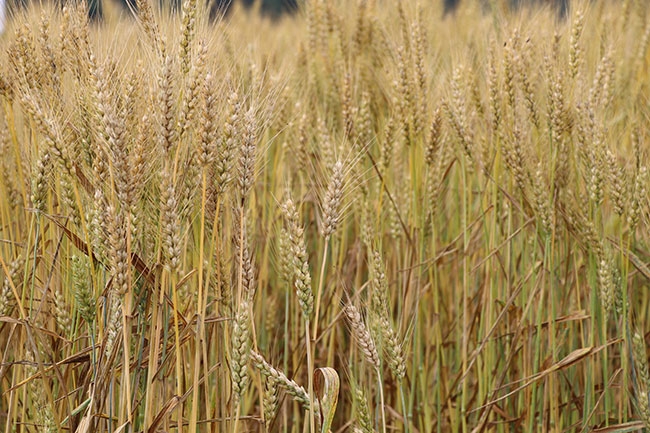 The research involves a technique called eco-TILLING. The name comes from TILLING, or Targeted Induced Local Lesions IN Genomes. TILLING relies on chemical methods to induce mutations in a plant population, then uses various advanced technologies to find and use desirable gene variants in the mutated population. Eco-TILLING relies on naturally-occurring mutations, not induced mutations, but it uses the same advanced technologies to find and use helpful natural gene variants.

“We have a collection of about 1,000 wheat landraces and varieties from all over the world. Landraces are varieties that were often grown many years ago by farmers. They may not be great in many characteristics, but they might have a lot of hidden variability that we can find and use. Eco-TILLING is finding that variability and using it,” explains Patricia Vrinten, a researcher with the National Research Council of Canada (NRC) in Saskatoon who is leading this study.

But in wheat, having just one inactive susceptibility gene isn’t enough to create a plant with better FHB resistance. That’s because bread wheat has what’s called a hexaploid genome. It contains three complete genomes, called the A, B and D genomes, and each gene has three copies, one in each genome.

“But the probability of identifying a wheat line with inactive variants in all three genes by chance is extremely low, so we are unlikely to identify this source of resistance by screening wheat lines for FHB resistance,” she adds. “Therefore we have to find lines with inactive variants in individual genes. Then we cross them using traditional crossing methods to combine all three genes in one plant and bring this hidden source of resistance into view.”

Vrinten’s group begins the process by identifying genes that could possibly increase susceptibility to FHB through various technical methods, such as gene expression studies followed by gene silencing methods, or through reviews of the literature.

“Some genes that cause an increase in susceptibility have been identified in barley or in Arabidopsis [a cousin of canola] or may even have been identified in wheat by us or our collaborators,” she notes. Plants like barley and Arabidopsis are easier to use for this type of work because they are diploids – they have only a single genome – so they need only one copy of a particular inactive susceptibility gene for their phenotypes to have increased FHB resistance.

Once Vrinten’s group identifies possible susceptibility genes in these crops, they can use the eco-TILLING approach to look for inactive variants of those same genes in their collection of wheat landraces and varieties. “Once we know what the gene is, we use PCR [polymerase chain reaction] and sequencing facilities to look for these variants,” she says, “NRC has very excellent facilities for sequencing and bioinformatics that help us a lot with this part of the work.”

These technologies to find the variants involve developing molecular markers. The resulting markers also allow the researchers to more efficiently produce plants containing combinations of one, two or three copies of the gene variant of interest.

Then they look at the phenotypes of these combinations to evaluate their resistance to FHB. Evaluating FHB resistance requires that the plants be grown to maturity, which takes time – especially since some of the landraces are very slow maturing.

Vrinten and her group have developed methods to speed up that testing. “Through a combination of tissue culture methods and plant growth conditions, we have managed to get the generation time down considerably so that in the growth chamber we can go through a generation in as little as two to two and a half months.”

Although it’s much more work to deal with three copies of a gene instead of just one, wheat’s hexaploid genome also allows Vrinten’s team to make more nuanced changes than could be made in a diploid plant like barley. For instance, let’s say a particular susceptibility gene is inactive in barley, causing increased FHB resistance. Because that gene is inactive, it also causes a problem for the barley plant; maybe the plant is a little too short or it doesn’t flower properly. But in wheat, perhaps if two copies of this gene are inactive and one is active, then that might provide additional FHB resistance while overriding the associated problem. “So in wheat you are actually getting a range of effects instead of the positive/negative effect that you get in diploid crops,” Vrinten explains.

Another important advantage to their approach is that the markers they develop will also enable wheat breeders to more easily move the desired gene variants into elite wheat lines.

A further benefit of this research is that the NRC has developed significant expertise in eco-TILLING, which can now be used for research to advance other important crop traits.

Vrinten and her team have already looked at a large number of candidate genes. “We have two that we already feel are very good; the parents are quite susceptible but when all three genes are combined, the line is quite resistant. We have a couple that we have already eliminated. And most of them we want to get more data on, or in some cases we might be missing one gene that we still want to combine.”

As part of their work, they have been conducting growth cabinet testing to assess the FHB resistance levels.

This research is ongoing. Vrinten notes, “We will be looking at additional genes as the literature evolves and as our collaborators come up with more information [on possible candidate genes].”

Vrinten and her group are collaborating on this research with Agriculture and Agri-Food Canada and the University of Saskatchewan’s Crop Development Centre, as well as many other people at the NRC. The NRC is the main funder for the project, and Saskatchewan’s Agriculture Development Fund is supporting the work on rapid germplasm development and rapid testing.