Adding winter wheat to your corn-soybean rotation increases corn and soybean yields and reduces
reliance on fertilizer nitrogen. Those benefits are thanks mostly to improved soil quality that develops in rotations with wheat. 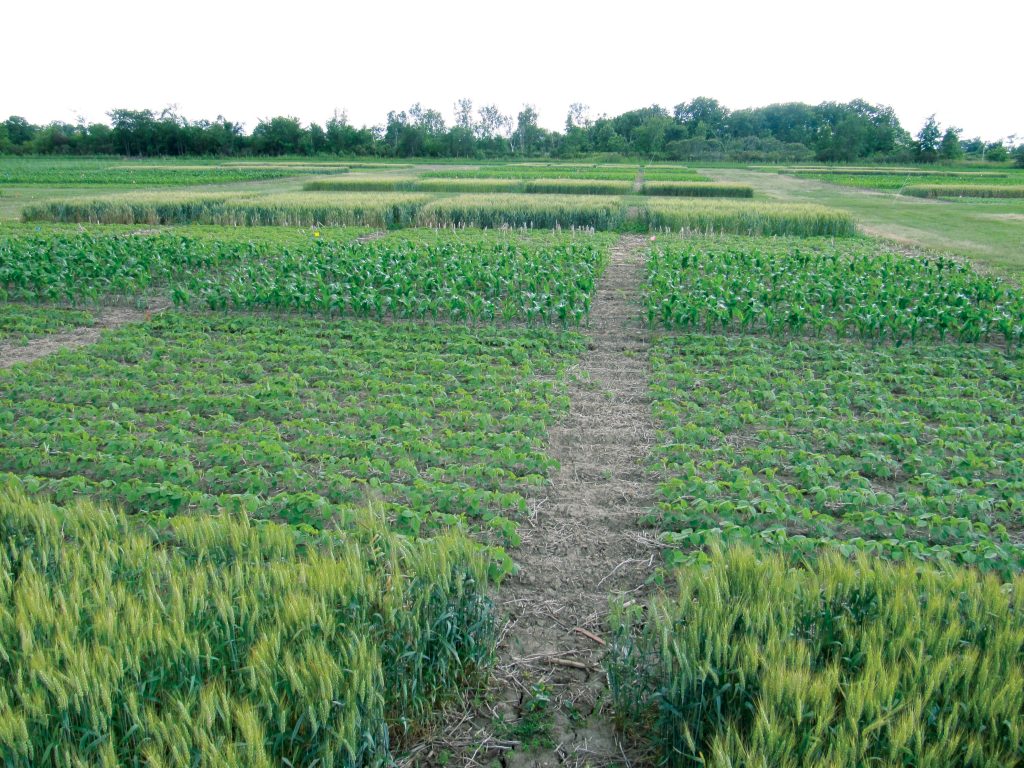 These advantages are clearly demonstrated in the findings from long-term crop rotations at Elora and Ridgetown. The two studies have somewhat different research designs, but the value of rotations that include wheat is clear.

Dr. Dave Hooker, from the University of Guelph’s Ridgetown Campus, is leading the Ridgetown study, which was started in 1995 by Doug Young of Ridgetown Campus. This site has a clay-loam soil. Its rotations include continuous corn (CC), corn-soybean (CS), continuous soybean (SS), soybean-wheat (SW), corn-soybean-wheat (CSW), and corn-soybean-wheat underseeded to red clover (CSWrc). The underseeded treatments are a recent addition for which there are three years of data. For each rotation, there are two tillage systems: 1) no-till for soybean and wheat, and fall strip till for corn; and 2) a conventional till treatment.

In the Elora study, all the rotations use the same nitrogen (N) rate. The rate is intended to be non-limiting, so it’s typically about 150 kilograms of nitrogen per hectare, applied as a side-dress.
“At Elora we’ve found that when we have wheat, or wheat plus red clover, or alfalfa in a rotation – essentially when we make the rotation more complex – our yield potential for corn increases. So we get higher corn yields with the same nitrogen rate when we have a more diverse rotation,” explains Deen.
In the Ridgetown study, the corn plots include four nitrogen treatments: 0, 60, 120, and 180 kg/ha of applied nitrogen. So Hooker can calculate the optimum economic rates of nitrogen for corn yields in the different rotations.

So, to maximize corn yields in the CC or CS rotations, you have to apply quite a bit more nitrogen than you do in the CSW and CSWrc rotations.

Another interesting aspect of the Ridgetown fertilizer data is the corn yield with no applied nitrogen. “In the corn-soybean rotation, when we apply no nitrogen, our five-year average corn yield is 95 bu/ac. But in the corn-soybean-wheat rotation with no nitrogen applied, our corn yield is 135 bu/ac. So there’s a 40-bushel yield difference due to rotation alone,” says Hooker. “And it is all credited to the better soil structure that wheat produces in the rotation.”

Better soil, better yields, better nitrogen use
“There is evidence in the literature in general that rotation complexity is associated with higher yields and with better soil quality. We see that at the Elora trial,” notes Deen.

A higher soil organic matter content promotes the formation of small, stable soil aggregates, contributing to a well-drained, porous soil with good moisture-holding capacity. Also, this improved soil structure makes it easier for roots to move through the soil to access water and nutrients, including nitrogen. These conditions all help the crop plants to be healthier, less stressed and more productive.

The Elora data demonstrate that the highest organic matter levels tend to be associated with the more complex rotations. One reason for that is the wheat in some of these more complex rotations. Wheat’s
fibrous root system contributes a substantial amount of organic matter to the soil. In addition, having winter wheat in the rotation allows growers to underseed red clover. Red clover is a great source of
organic matter for the soil. It’s also efficient at fixing nitrogen, providing about 45 to 82 kg/ha of nitrogen as a plowdown crop, depending on conditions.

Similarly, in the Ridgetown study, the CS rotation has the lowest soil organic matter and the poorest soil structure, while the rotations that include wheat have much better soil quality characteristics.
“In the corn-soybean-wheat system, the soil has a higher proportion of finer, more stable aggregates, producing a better structured soil with higher amounts of organic matter, compared to rotations without wheat. Wheat has a deep, fibrous root system which helps build soil structure compared to soils where
wheat is not grown, such as a corn-soybean rotation,” explains Hooker.

This improved soil structure increases the corn and soybean yields in the CSW rotation. As well, it makes the corn in this rotation less reliant on nitrogen fertilizer. With better soil structure, the corn develops a better root system that is better able to seek out nutrients already in the soil, and the improved soil moisture and aeration conditions make for a healthier plant able to take better advantage of the available nitrogen.

“The soil structure is so much better that the crop doesn’t need as much nitrogen fertilizer to produce high yields,” says Hooker.

The Elora data also show that other diverse rotations also provide similar types of benefits. For example, replacing the two years of soybean in the CCSS rotation with oats and barley, for the CCOB and CCOrcBrc rotations, resulted in a very good boost to corn yields.

In a year with above-average rainfall, a soil with poor structure is more likely to become saturated, which can reduce crop health, performance and yields. As well, nitrogen is lost more readily from a saturated soil. “So if you have a good rotation, you’ll have good soil structure, your crop will be happier, and you’ll lose less nitrogen out of that system,” says Deen.

Credit wheat for yield boosts
Hooker emphasizes that growers should give credit where credit is due when it comes to wheat in the rotation. “A lot of growers look at corn, soybean and wheat crops individually, as if they are not influenced by one another. But the increased corn and soybean yields [in the corn-soybean-wheat rotation] should be credited to the wheat enterprise. We’re encouraging growers to use that approach to make decisions on whether to grow wheat or not,” says Hooker.

Overall, a more diverse rotation that includes crops like wheat with deep, fibrous root systems will promote better soil quality, which contributes to higher yields of both corn and soybean, with less reliance on fertilizer nitrogen