This year’s Farm Smart Expo saw a number of interesting speakers offering growers the results of their years of research. The University of Guelph’s Dave Hooker, assistant professor in the Department of Plant Agriculture (Ridgetown Campus), and Bill Deen, associate professor in the Department of Plant Agriculture (Guelph Campus) were on hand to talk about the economic and agronomic implications of long-term crop rotation decisions. 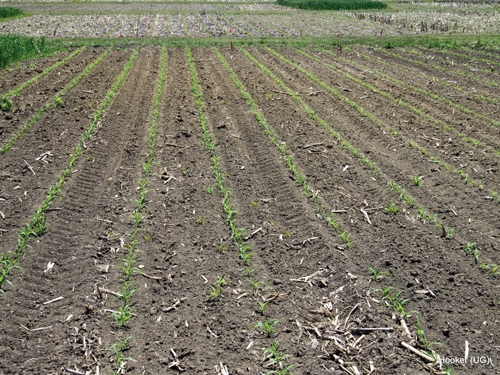 While many growers have no problems conducting their own on-farm, short-term research, it’s the long-term research that can pose a problem. That’s where researchers come in. Using five test locations, University of Guelph researchers collect long-term data that can be used to help speed up result times, eliminating the need to play sometimes-risky guessing games.

“Basically, the answers to long-term questions tend to evolve over a long period of time,” says Hooker. “For example, organic matter changes in the soil when using different crop management systems – or crop rotation or a tillage system.”
“A grower would find long-term research extremely beneficial if they adopt a management system, and in 10 years’ time they reflect on their management system after doing an evaluation on the organic matter content of their soil,” he continues.

After that 10-year period, they’ll need to decide whether or not the system actually worked. The problem is, if it didn’t work, then they’ve essentially wasted 10 years of management. Realistically, many growers can’t spare 10 years. They need results now, he says.

“So the real benefit of these long-term trials is that we can do these trials, explore different treatments, and answer the long-term questions so growers can implement the best management practices using the long-term data that we have instead of discussing or speculating how management might affect crop productivity or sustainability in the future,” says Hooker.

Together, both researchers presented their findings at the Elora Research Station. Deen presented data from Elora, while Hooker supplemented Deen’s findings with data from Ridgetown.

“The Ridgetown plot has something different that the Elora plot does not have,” says Hooker. “And that is a nitrogen rate split of the plots. At Ridgetown, in the corn plots we have 0:60:120:180 kilograms per hectare of nitrogen. In the wheat plots, we have all of those rotations and tillage combinations, but we also have another split and that’s 0:50:100:150 kilograms per hectare. The wheat plots are further divided up into with and without under-seeded red clover.”
Although the two stations operate similar test plots, they are on two very different types of soil, which can affect long-term results. Ridgetown is on a Brookston clay loam, a fine-textured soil that is heavier than the silt loam found in Elora.

Given that there are only four to five research facilities with test plots like this, farmers will have to take the information at hand and experiment with rotations on their own farms to see how they work.

“At least this gives a first-line answer to some of the questions that they have on which rotations are better than the other or which tillage systems are better,” says Hooker.