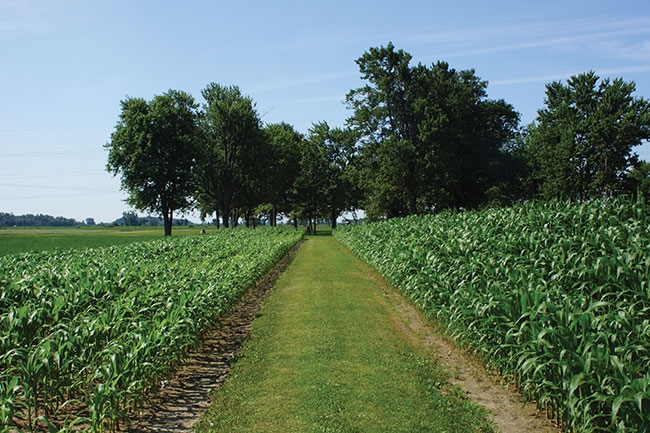 The study, funded by OMAFRA’s New Directions program in collaboration with Agriculture and Agri-Food Canada (AAFC), looked at the effectiveness of the DeNitrification-DeComposition (DNDC) model in capturing the beneficial impacts of diversified cropping systems over time.

University of Guelph professor Claudia Wagner-Riddle, who led the study along with her colleague Marek Jarecki in the school of environmental sciences, says the study used data from two long-term trials with contrasting soil types: a 35-year trial at Elora and a 57-year trial at Woodslee.

“Our objective was to test the ability of the DNDC model to predict changes in yield as well as soil organic carbon, and to be able to do that you need long-term plots,” Wagner-Riddle says.

“The typical approach is to run the model using existing data and compare it to the results that you obtained in the trials to get confidence that what the model is predicting is close to the truth,” she explains. “We picked these two sites because we were interested in studying the long-term effects of diversified rotations.”

According to Drury, modeling work like Wagner-Riddle’s is indirectly invaluable to Ontario producers.

“The reality is that research is very expensive and we can’t look at all things at all times,” he says. “Soils and climate varies, and crops change depending on economics. That’s where models like DNDC come into play, because if we can validate a model like in this paper, then you can use the model to start doing the what-if scenarios.”

She says the climate community has created scenarios that consider possible climate situations in the future. These are called representative concentration pathways, or RCPs, and they take into account three possibilities: that nations around the world don’t reduce fossil fuel use and C02 levels reach very high concentrations; that concentrations stay at a medium level; and that concentrations hit a low level.

Using data from the two long-term studies, Wagner-Riddle’s team first validated the model and then projected it into the future, ending at the year 2100, to explore how monocropping and diversified rotations, respectively, responded to these different RCPs.

What they found, says Wagner-Riddle, was that diversified rotations were more resilient to climate change. “They were able to deal with climate change and yields increased, while in the simple rotations, yield stagnated due to water effects,” she says.

The long-term rotation trial at Woodslee

Long-term trends
Drury says the trial at Woodslee has generated “an absolute goldmine” of data.

The study involves 12 treatments, he says, with half of these fertilized and half left unfertilized; plots include continuous corn or a four-year rotation with corn: corn-oats-alfalfa-alfalfa (with the alfalfa underseeded to the oats in the third year).

“Those plots have been in place for a lot of years and the treatments have been maintained, along with the fertilization, but there have been gradual changes in the management of these treatments to reflect current practice,” says Drury. “When it started, the seeding rate was a lot lower than it is now and row spacing was quite a bit wider. Over the years, as new corn varieties come out, we’ve changed to more productive varieties, and we use current planting rates and row spacing.”

He says that in the continuous corn treatments the soil has degraded over time, and researchers have observed many other problems. In a good year, the crop reaches about knee-high. Yields have remained flat for these plots, he says, because researchers have introduced better varieties over time.

“In contrast, in the rotation treatments, the soil quality is so much better than continuous cropping, such that the yields have generally increased over time, and the soil properties are improved – higher carbon levels, improved physical properties, better drainage, improved water holding capacity,” he says.

But yields in the fertilized, rotated plots reach 131 bu/ac on average.

Drury says the improved yields and soils in the diversified rotations stem in part from the use of cover crops in the “shoulder seasons” – spring before planting and fall after harvest – and that the inclusion of a cover crop or winter cereal crop in the rotation, such as winter wheat, can make a big difference.

Long term impacts can be seen from these studies, but what about the short-term, in which farmers make decisions based on practical factors and return on investment?

Wagner-Riddle is working on another modeling study looking at the short-term effects of a diversified rotation, including effects on yield, soil organic carbon, nitrous oxide emissions and water quality.

“From a yield perspective we can see that yields do fare quite a bit better for diverse rotations, especially those that include winter wheat and particular winter wheat plus a cover crop,” he says. “These soils are more resilient, able to withstand drought conditions or
excess rain.”