Agriculture and Agri-Food Canada (AAFC) and the University of Guelph continue to collaborate to develop high-quality, high-yielding and disease-resistant cultivars of dry beans. 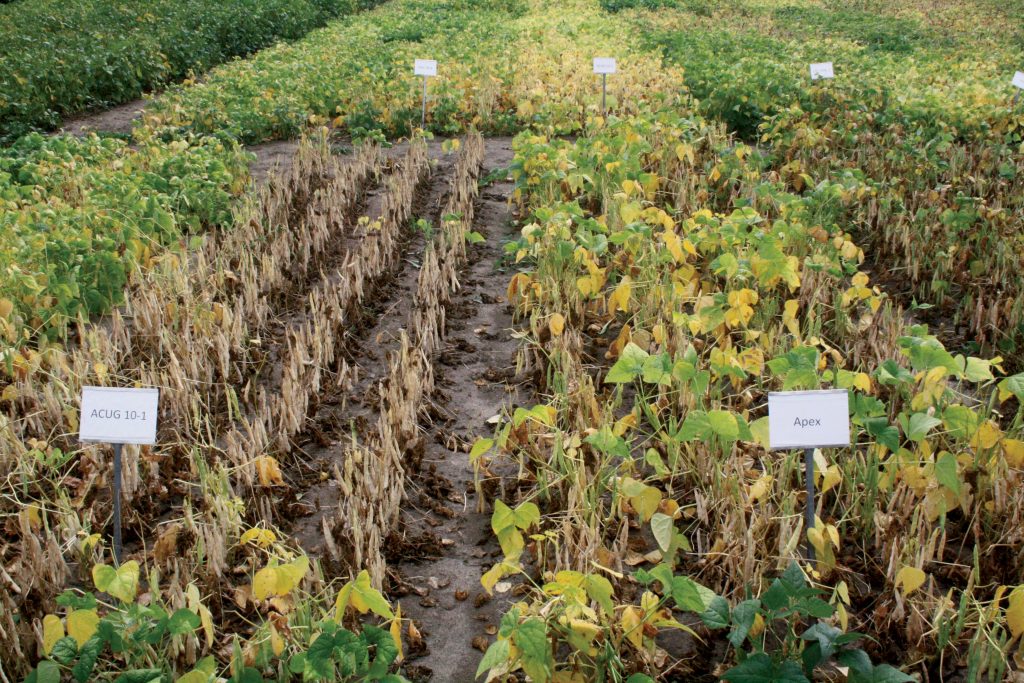 The AAFC/University of Guelph Bean Breeding Program was established in 2008 with the merging of the two pre-existing breeding programs, with southwestern Ontario as the target area. Dr. Ali Navabi, research scientist with AAFC’s Greenhouse and Processing Crops Research Centre, has been leading the program while working for AAFC as a dry bean breeder.

The breeding program’s objectives are defined by the program, based on the needs of the industry. It has various stakeholders – from growers and seed companies to processors, consumers and buyers – in the value chain who express what they are looking for in the variety.

“There are some agronomic traits we know growers are very interested in, like varieties with high yield, reasonable maturity time, and really good canopy architecture, so they can harvest the beans directly,” says Navabi. Processors and consumers look for different traits, so the program looks at different parts of the value chain.

The ultimate goal, Navabi says, is having a variety with as many of those desired traits as possible. These traits can include anything from agronomics (i.e., high yield, maturity and canopy architecture) to resistance to diseases and pests (tolerance/resistance to common bacterial blight, anthracnose, white mould, root rot and soybean cyst nematode, for example) and nitrogen use efficiency and fixation (with varieties being as independent as possible of fertilizers). End user traits, such as cooking, canning and composition, are also considered.

In the program, beans are grown on thousands of plots annually. “It’s a wide genetic diversity that creates true crossing,” explains Navabi. “Over the years, we make selections after selections and improve the breeding population, from which we extract new varieties.

“We also test the beans in the field and greenhouse with a technique based on DNA (i.e., genetic/molecular) markers, which predicts the presence of certain genes we’re interested in.”
Each year, Navabi and the team select between 10 and 12 varieties for registration trials. Once the varieties are registered, a commercialization committee offers them for commercialization to bean growers or seed companies.

When it comes to the desired traits, Navabi says, the biotics stand out as a moving target because they keep evolving, as in the case of anthracnose and common bacterial blight – major diseases that
attack bean crops in Ontario – reducing yield and quality.

According to Navabi, the technique of targeting common blight resistance began in the 1980s. “It’s very common in the new navy bean varieties now to have resistant to common bacterial blight, but in other classes, we still have a ways to go,” he says.

Common bacterial blight resistance became available first in OAX Rex, released by the University of Guelph back in 2000. This was followed by a second variety, Rexeter, in 2007-08.

In 2003, a new race of anthracnose, Race 73, cropped up in Ontario – a race nearly all navy beans were susceptible to.

“Three years ago, a new research project was initiated on anthracnose, including screening a wide array of bean varieties for resistance to anthracnose, identifying sources of resistance existing in our
material and then advancing our breeding program and developing navy beans resistant to the prevalent race of anthracnose,” says Navabi.

“Our challenge now is combining these two disease resistances in the same variety,” says Navabi. “We want a variety that carries resistance to not only common bacterial blight but also to anthracnose, as well as to bean common mosaic virus (i.e., multiple diseases resistance).”

In the Ontario registration system, Navabi and team now have a candidate to be registered as a variety that is resistant to all three of these diseases. “We’re hoping to release it in the near future,” he says. “It has very high yield and high canning quality.  This variety has a code name for now and will get a name once it’s registered.”

In the kidney bean market class, resistance to common bacterial blight is not common.

“Our program has a new line we have in the registration system, which is a dark red kidney bean with moderate resistance to common bacterial blight,” says Navabi.

The program has also begun incorporating other genes of resistance to anthracnose, which is expected to result in more durable resistance to the disease.

Ontario beans have seen a 63 per cent yield increase since 1910, due to improved agronomic practices and varieties.