In the Peace River region where production of creeping red fescue, alsike clover and red clover has been a mainstay for many farmers, tighter canola rotations have gradually displaced forage seed production. While this threatens the sustainability of the seed industry, more intense canola rotations may be costing farmers profit as well. That is the finding of a crop rotation study conducted by Agriculture and Agri-Food Canada (AAFC) at Beaverlodge, Alta. 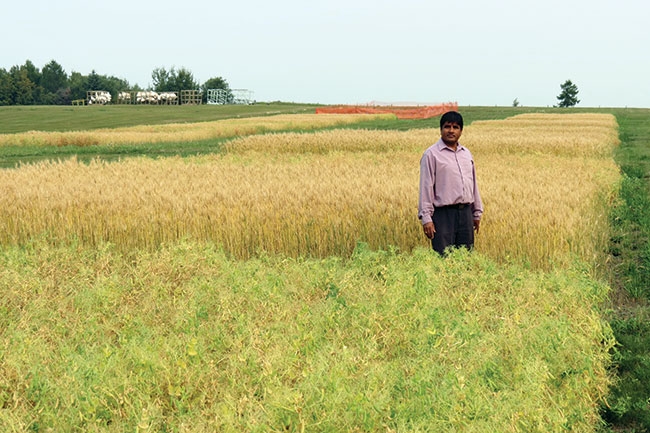 Research by Nityananda Khanal and colleagues found that biennial and perennial forage-based rotations can be more profitable than short term canola rotations. In the Peace River region where production of creeping red fescue

There are a lack of studies that evaluated comparative economic and ecological advantage of annual and perennial crops in crop rotations,” says AAFC research scientist Nityananda Khanal. “In order to bridge this gap with a special reference to Peace Region of Western Canada, a crop rotation study involving various forages and annual crops was initiated in 2013. My colleagues and collaborators started this study before I joined the Forage Research Program at Beaverlodge in 2016.”

In 2013, a four year crop rotation study was set up to assess biennial and perennial forage crops grown for seed, and their impact on profitability. Six different crop rotations were established in 2013:

For the non-legume crops of creeping red fescue, wheat, canola and barley, additional nitrogen treatments of 0, 45 and 90 kg of nitrogen (N) per ha (0, 40 and 80 lbs./ac.) were applied in the seed row for annual crops and as a fall broadcast treatment for creeping red fescue. A CrossSlot drill that separates seed and fertilizer was used to seed the plots and minimize the risk of germination damage with higher rates of N. Gross margins (commodity sale values minus variable costs) were calculated for each year, and cumulatively over the four years of the study.

Certainly the price of commodities had a large influence on gross returns. Two years of red clover followed by wheat and canola had the lowest gross returns over the four years, reflective of the low commodity price for red clover seed. Alternatively, the other forage legume in rotation, alsike clover for two years followed by wheat and canola, had a cumulative gross margin statistically similar to continuous canola and wheat-canola rotations.

The pea-barley-wheat-canola rotation had the second lowest gross returns.

Research by Nityananda Khanal and colleagues found that biennial and perennial forage-based rotations can be more profitable than short term canola rotations.

Nitrogen benefits of legumes
Khanal says the agronomic benefits of rotations integrating biennial forage legumes for seed production were evident in the succeeding plots of wheat and canola. Wheat and canola gross margins tended to be higher in alsike and red clover rotations than in annual rotations, specifically where zero or 45 kg of nitrogen (N) per hectare (N/ha) was applied.

“Wheat and canola receiving no fertilizer following a biennial stand of either red or alsike clover grown for seed produced significantly higher grain yields compared to rotations where those crops were preceded by annual crops such as peas, wheat, barley or canola,” Khanal says.

Similarly, without nitrogen fertilizer application, canola yield from forage legumes-based rotations were 40 to 70 per cent higher than those from annual crop sequences.

Looking at legume contribution to N requirements for the following canola or wheat crop, two years of alsike clover or red clover yielded the equivalent of applying 45 kg N to canola or 90 kg N to wheat.

Khanal plans on analyzing the results in further detail to include soil quality indicators. The study is also continuing from 2017 through 2021, and will look at profitability and whether the agro-ecological benefits of biennial and perennial forage crops to soil physical and chemical properties are better seen over a longer time period of time, particularly when compared to annual cropping system.