Ontario’s current phosphorus (P) and potassium (K) fertilizer recommendations for corn, soybean and wheat were developed in the 1970s. 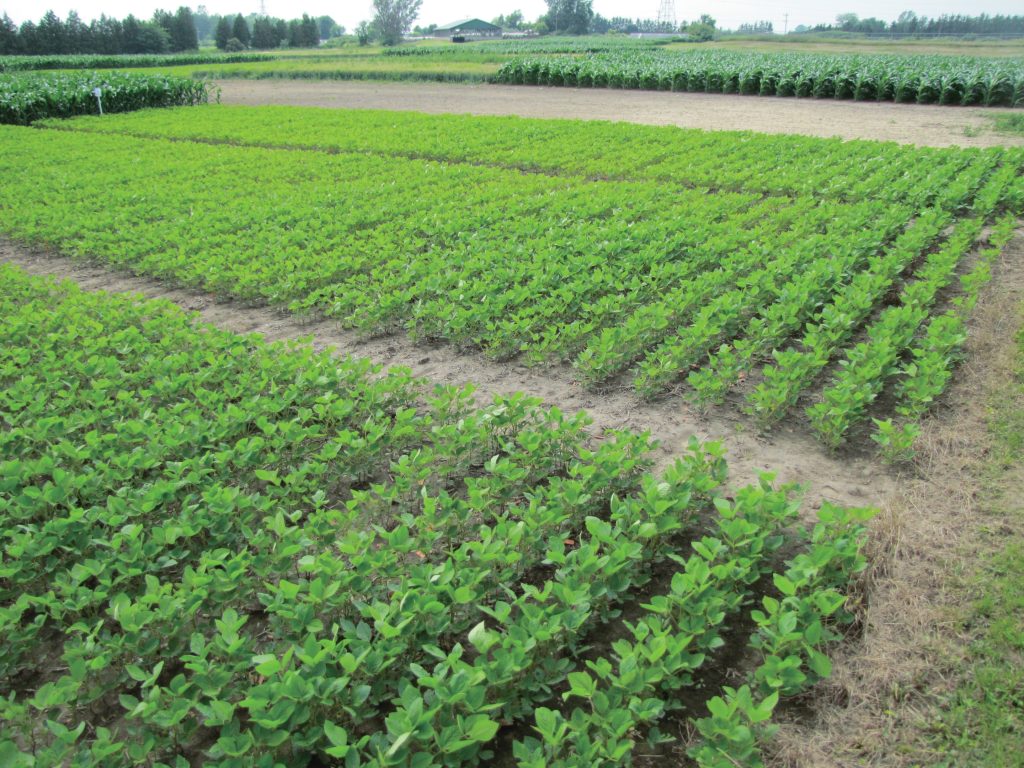 Researchers want to find out if significant yield potential is remaining untapped because of low potassium and phosphorus levels in the soil. Ontario’s current phosphorus (P) and potassium (K) fertilizer recommendations for corn

Are those recommendations out of date? If so, is that limiting crop yield potential? The answers to those questions could have important implications for growers. Now, a long-term field study is underway to find the answers.

The study was prompted by several trends and concerns. “Over the last number of years, crop yields have been increasing, and with that you have more crop removal [of nutrients from the soil],” says Horst Bohner, provincial soybean specialist with the Ontario Ministry of Agriculture and Food (OMAF) and Ministry of Rural Affairs (MRA).

“It’s also clear that soil test values of phosphorus and potassium are declining. [For example,] depending on which survey you look at, about one out of five fields in Ontario is deficient in potassium, and it could be even higher,” says Bohner. “So you start to wonder when is this problem going to be rectified. Then the question is: how does it impact the bottom line? Because of course phosphorus and potassium are fundamental nutrients in terms of yield, especially potassium for soybeans and corn.

“And another aspect is that, when the original yield response curves were created, yields were much lower and it’s possible that cultivars’ use of nutrients was different. So you wonder if it’s the same scenario now as it was in 1975.”

Bohner is collaborating on this study with Peter Johnson and Greg Stewart from OMAF and MRA, and Dr. Dave Hooker from the University of Guelph, Ridgetown Campus.

Johnson, who is the provincial cereals specialist, outlines another factor that is leading the researchers to wonder if the P and K recommendations might be out of date. “Back in the 1970s, the equilibrium soil test – the soil test value you would end up at, based on how much the crops removed versus the fertilizer recommendations we were making – would have been a soil test phosphorus of 13 parts per million (ppm) and a soil test potash of about 110 ppm,” he says. Those happen to be the breakpoint soil tests, where if your soil test phosphorus is above 13, then large phosphorus applications don’t show much [yield response]. Similarly with potassium, 110 ppm is where [the yield response to potassium applications] starts to level off.

“But if you use today’s crop yields, the equilibrium soil test is 7 ppm for P and 70 ppm for K. That’s much lower than a 13 and a 110,” adds Johnson. “Does that mean we need much higher fertilizer
recommendations so we at least maintain a 13 and a 110? Or are our recommendations still valid because, even at a seven for phosphorus, if I apply the right amount of phosphorus in the right placement at planting time, I can still get 240-bushel corn? We simply don’t know the answer.”

Study setup
The study involves a three-year rotation with corn, soybean and winter wheat, multiple fertilizer treatments, and at least three sites. The first corn and soybean plots were seeded in spring 2012, and the first wheat plots were seeded in fall 2012. Each site will have all three crops growing every year. The three sites are at Elora (with a loam soil), Bornholm (with clay loam to silty clay loam soil) and Ridgetown (with a clay loam soil).

Across all four blocks, the researchers are applying several starter fertilizer treatments. These treatments include liquid and dry formulations, in-furrow and two-by-two placement (two inches to the side and two inches below the seed), various rates, and various proportions of nitrogen, phosphorus and potassium.
The study design will allow the researchers to determine the best P and K fertilizer strategies for today’s crops when soil test P and K levels are deficient and when these levels are adequate.

The researchers hope to run the study for at least 10 years because it will take three or four years just to build up the soil test P and K levels to where they want them. Although long-term agricultural research funding is becoming increasingly rare, Grain Farmers of Ontario and the OMAF and MRA – University of Guelph Partnership have stepped up as primary sponsors to get the project going. Johnson says, “I really thank Grain Farmers of Ontario for supporting this project. Long-term research, like research on crop rotations and long-term fertility studies, is a very critical part of having the right answers in the future.”

A tale of two approaches
In effect, the study is comparing two approaches to fertilizer management: the sufficiency approach, and the build-and-maintain approach.

OMAF recommendations from the 1970s are based on the sufficiency approach. This approach involves maximizing the economic return in a given year. “If I have a soil test of 6 ppm for phosphorus and if I follow those recommendations, then I apply phosphorus to the point where, when I spend $1 on phosphorus, I get at least $1.01 back. But if I spend a $1 on phosphorus and I only get $1 back, I stop applying phosphorus because that is no longer putting money in my pocket,” says Johnson. “It’s called the sufficiency approach because theoretically that is sufficient fertilizer to maximize my economic return this year.”

Bohner adds, “With the sufficiency approach, you’re not trying to take the soil nutrient levels anywhere. You’re simply applying enough nutrients to satisfy that given crop.”

As Ontario growers have seen, the sufficiency approach can produce good results. However, factors such as high fertilizer costs and/or low crop prices may mean that soil test levels drop quite low before much fertilizer is recommended.

The build-and-maintain approach aims to ensure soil nutrients are at adequate levels. “In the build-and-maintain approach, when you start out with any new field, you take a soil test and determine what the nutrient levels are. Then you build the soil test levels to a place where it’s very unlikely that you would ever take a yield hit [due to low nutrient levels],” notes Bohner. “So over maybe three or five years, depending on what you can afford, you broadcast the nutrients to build up to those soil test levels. Then every year or once in the crop rotation, you re-test to see what the nutrient levels are doing. If they are going down, you put some more nutrients on to replace what is being removed by the crops.”

Based on plenty of good research data, the researchers are aiming for about 20 ppm for soil test P and about 120 ppm for soil test K as the adequate levels in the study’s build-and-maintain plots. Johnson explains, “Based on the science, if you have 13 ppm for P and 110 ppm for K, you should be in pretty good shape. But there’s always soil variability across a field. So, if the average phosphorus level for the field is about 20 ppm, then likely everywhere in the field will be at or above 13 ppm.”

Opinions differ somewhat on what the exact numbers for soil test P and K should be, and the researchers might decide to aim for slightly different numbers during the course of this study. “With a lot of these soils, there are unavailable forms of especially phosphorus but also somewhat with potassium, which will eventually become available. So it’s a little difficult to predict exactly what the right soil test levels are,” says Bohner.

Results so far
Obviously it’s very early in the study to start drawing conclusions, especially since the researchers are still in the process of building up the soil test P and K levels for the build-and-maintain plots.
However, there are some interesting preliminary results.

“For soybeans, I think the way this is going to shake out is that potassium will be the main driver in terms of an economic response, rather than phosphorus,” says Bohner. “The other thing on the soybean front is that it seems, if your soil test is low, it doesn’t make much difference to soybean yields whether you broadcast the nutrients or apply them through the planter in a 2×2 band.

“For corn, phosphorus and potash are important. Also, applying P and K in a starter band is more important for corn than soybeans,” he adds.

The winter wheat plots are also generating some “cool results” in 2013, says Johnson. “I don’t have everything summarized, but it was pretty clear at the Elora site that on the plots where we shorted the wheat crop for potash, it had a significant impact on ‘crinkling down,’ or stem breakage after maturity, but not much impact on yield. I’m not sure that will carry through [the rest of the study], but it’s one of the things that is really intriguing.”

For now, Bohner advises growers: “Be sure to soil test on a regular basis, and check if the levels of phosphorus and potassium are slipping. Those are the big soil test results to watch in terms of yield impact, especially potassium for soybeans. I think we are leaving significant yield potential untapped in Ontario because we’re not applying enough potassium. That is really the overall message so far.”