Soil phosphorus
Plant-available soil phosphorus is taken up from soil by plant roots. While soil testing can estimate plant-available soil P, they cannot predict with 100 per cent accuracy when crops will respond to added P fertilizer. The frequency of crop response is strongly influenced by environmental conditions, particularly soil temperature and moisture. For example, at research sites in Alberta, the observed response to P fertilizer, particularly with wheat, barley and canola, tended to be greater with wetter, cooler spring soil conditions. Generally, farmers can expect greater crop response to P fertilizer in a year with wetter and/or cooler spring conditions than in a spring with warmer, drier conditions.

It is important to note soil P levels have increased in some fields over the years as a result of repeated annual commercial fertilizer P application or frequent livestock manure application. But, many farmers have been cutting back on P fertilizer application, causing soils to gradually become more deficient in soil P.

A province-wide Alberta research project was conducted with wheat, barley and canola, and found that 81 per cent of wheat sites, 90 per cent of barley sites and 72 per cent of canola sites responded to added phosphate fertilizer.

Across the Prairies, response to P fertilizer has been correlated to the amount of soil P extracted from the soil. Soil test P correlation work has been with the 0 to 6 inch sampling depth. Ensure to sample the 0 to 6 inch depth separately from deeper depth samples to accurately determine P fertilizer requirements. Table 2 provides a guide for soil P levels for the modified Kelowna method. Generally, cereal and oilseed crops grown on soils with a very low or low P level have a high probability of response to P fertilizer, often in the range of 90 per cent.

Soil pH effect on soil P
Ortho phosphate, the form of P taken up by plants, is highly reactive with certain soil elements. Generally, soil P is slightly more available to plants in a pH range of 6.0 to 7.8. At higher pH levels (>7.8), calcium is more reactive with phosphate, creating forms that have slightly lower availability to plants. Magnesium acts in the same manner, forming less available magnesium phosphate compounds. In more acidic soils, aluminum and some other elements will increase in solubility and tie up soil P. This reaction limits the availability of inorganic P to plants at soil pH levels <5.5. Generally, I am far more concerned about P tie-up at low soil pH than higher soil pH. Normally, I do not adjust P fertilizer recommendations based only on soil pH when the range is between 5.5 and 8.0.

Phosphorus fertilizer recommendations
Phosphate fertilizer recommendations for various crops are provided on the Alberta, Saskatchewan and Manitoba departments of agriculture websites. Tables 3 and 4 are examples for spring wheat in Alberta. To determine the recommended rate of P, simply look at the soil test level in Table 3 and match it with the soil zone of your farm. For example, if you are growing wheat in the Thin Black soil zone and your soil test level is 35 lb P/ac, the recommended phosphate rate would be 30, 35 or 40 lb P2O5/ac, depending if seedbed moisture conditions are dry, moist or wet, respectively. Normally, I would use the moist to wet values for the recommendation. 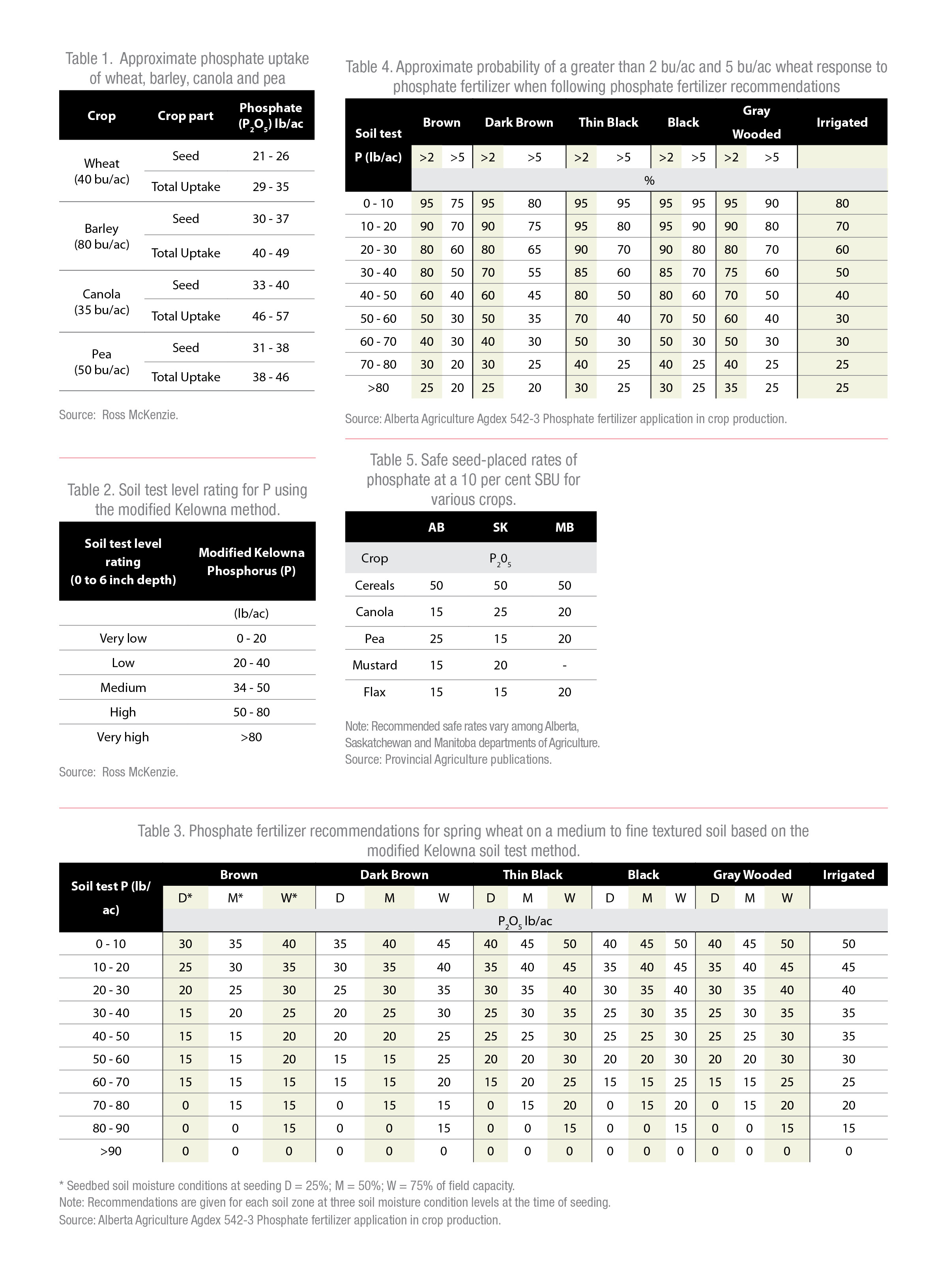 For cereal crops grown on soils that are medium to low in available P, seed-placed phosphate at recommended rates is equal to or better than banding near the seed and far superior to broadcast and incorporation.

For canola grown on soils very low to medium in available P, rates up to 15 to 20 lb/ac P2O5 can be seed-placed using a seedbed utilization of 10 per cent. Higher P rates should be either side- or mid-row banded at the time of seeding or banded prior to seeding. Seed-placed or banded fertilizer P on soils high in available P at rates up to 15 lb/ac of P2O5 may result in a crop response 30 to 50 per cent of the time, depending on soil zone and environmental conditions.

Phosphate fertilizer does not have nearly as strong a beneficial effect on pulse crops as these crops are fairly efficient at taking up soil P. Alberta research suggests pea is most responsive to P fertilizer when soil P levels are less than 30 lb P/ac (modified Kelowna method). Above this level, there is a relatively low chance P fertilizer will increase yield. When soil test P levels are medium to high, an annual maintenance application of phosphate fertilizer should be considered to meet crop requirements and replenish soil P that is removed.

Effect of previous crop
Canola has a relatively high demand for soil P. It is a non mycorrhizal crop and uses different means to aid in soil P uptake, leaving soil P more depleted compared to cereal or pulse crops. As a result, cereals and other crops that follow canola tend to be more responsive to P fertilizer. Often I suggest adding an additional 10 lb/ac of phosphate over and above the P recommendation for cereal or pulse crops, when following a good yielding canola crop.

Phosphate fertilizer recommendations
For optimum annual crop production, an adequate supply of P close to the seed during the first six weeks of growth is best. Most annual crops take up the majority of their P requirements in the first 40 days after emergence. Placement of P in or near the seedrow with cereal and oilseed crops has traditionally been the best method used for P fertilization across the Prairies. Preplant banding of P with nitrogen has been found to be a good alternative method of application under certain conditions. However, under conditions of low to medium soil P coupled with low soil temperatures, “starter” P in the seed row is frequently very beneficial for annual crops. Finally, be cautious not to exceed the safe seed-placed fertilizer rate for each crop. 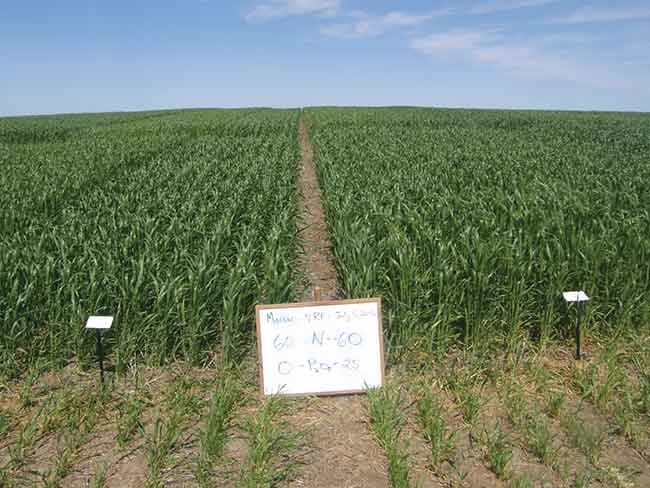 Wheat response to P fertilizer on an upper slope position in a variable rate fertilizer research study. Strip on the left side had no P fertilizer and strip on the right had 25 kg/ha of seed-placed phosphate. Phosphorus