Oilseed crops – particularly canola – and forage crops have a higher sulphur (S) requirement than cereal or pulse crops. S is required in the development of fertile canola flowers, is needed for protein development in cereal crops and must be present for good nodule development of legume forages, such as alfalfa, and pulses, such as pea and fababean.

Across the Prairie provinces, an estimated 35 million acres are considered potentially S deficient for optimum canola production and the potentially deficient areas are increasing due to increasing canola acreage and yields. Also, researchers have developed a much better understanding of soil S dynamics.

The primary source of plant-available sulphate-S (SO4-S) in surface soil comes from the breakdown and release from soil organic matter. Soils that are sandy or low in organic matter tend to be more prone to S deficiency, since only a small amount of SO4-S is released from organic matter and is susceptible to leaching loss under higher moisture conditions. In fields with variable topography, upper- and mid-slope field positions tend to be lower in SO4-S.

The subsoil of Brown and Dark Brown soils in the southern Prairies often has an abundance of gypsum [calcium sulphate (CaSO4)]. This mineral can be an important source of plant-available S in these soils.

Soils most prone to S deficiency are the Thin Black, Black and Gray Wooded soils. These soils were formed in areas of relatively higher rainfall with greater leaching potential. These soil areas generally have higher yield potential due to higher precipitation and lower evapotranspiration levels, resulting in higher S uptake and removal by crops.

Brown and Dark Brown soils in the southern Prairies are usually not considered S deficient because they often have relatively higher levels of gypsum in the subsoils. However, research in recent years has clearly shown deficient levels of SO4-S occasionally occur in the surface soil. This requires the addition of S fertilizer, even though the subsoil has adequate plant-available SO4-S levels.

Water used for irrigation that originates from the Rocky Mountains typically contains SO4-S. Approximately 30 lb/ac of plant available SO4-S is applied to soil in 12 inches of irrigation water. Often the S applied in irrigation water is sufficient to meet crop requirements over a growing season, but soil testing irrigated fields is important to ensure adequate sulphate is present in surface soil each spring before seeding.

In all soil zones across the Prairies, various combinations of high rainfall, high yield potential, low organic matter, topographic position of soils on the landscape and sandy textured soils are predisposed to potential S deficiency. Farmers and industry agronomists need to be aware of the potential soil conditions for S deficiency on their land. 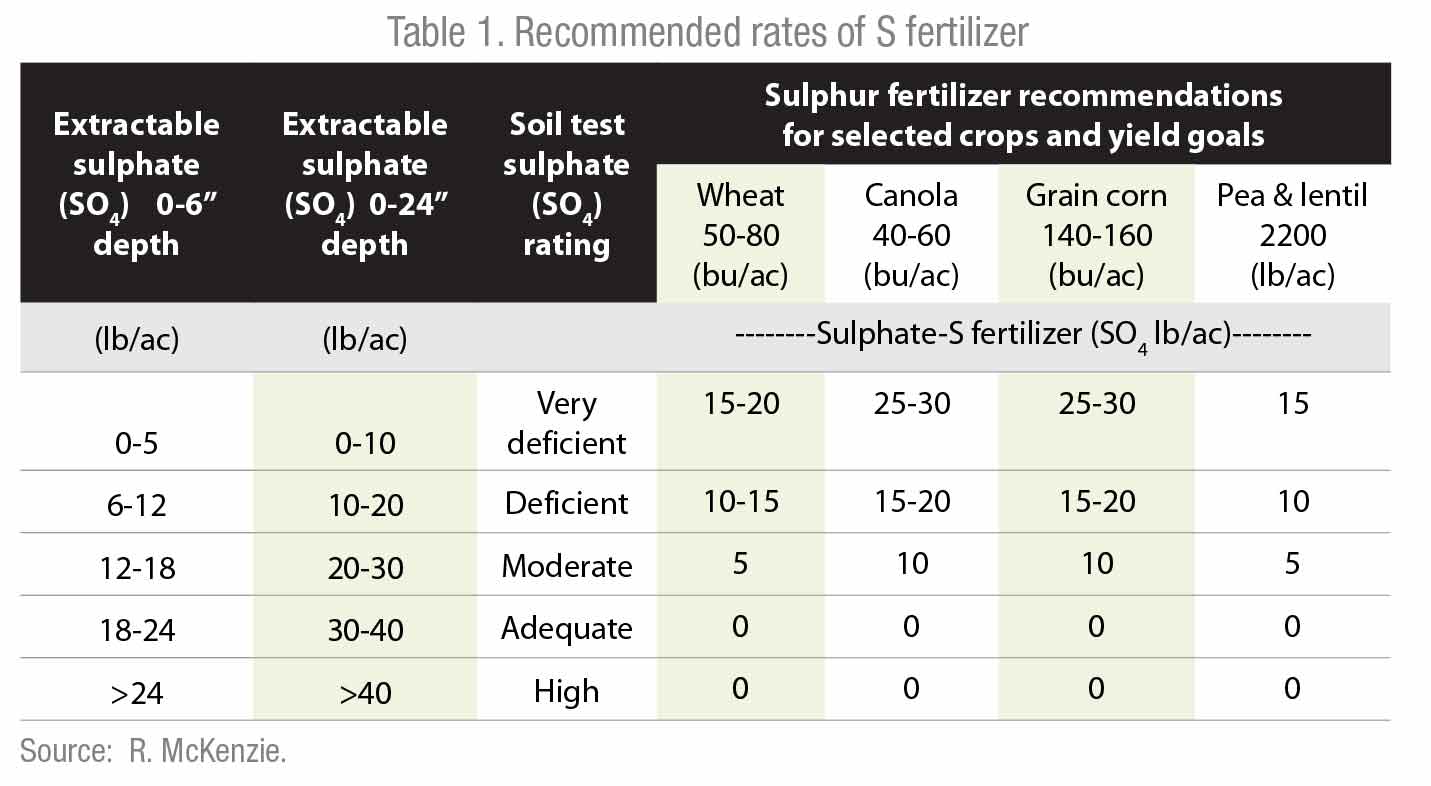 Soil test for sulphate-sulphur
Plant-available S in soil is determined by measuring the soluble SO4-S content in soil samples from 0 to 6, 6 to 12 and 12 to 24 inch depths. Because sulphate is mobile and frequently occurs in larger amounts in subsoil, incremental depth sampling is very important. A good set of soil samples can provide a fairly reliable basis for making S fertilizer recommendations as long as representative soil samples can be obtained from the field.

Even with proper sampling, obtaining representative samples from a variable field can be a challenge. Studies across all soil zones have found the level of plant available S can vary greatly with landscape across a field. The benchmark or topographic system of soil sampling can be helpful to determine soil S levels and then develop fertilizer plans. For benchmark sampling, the locations selected must be representative of the various field areas; if benchmark locations are not representative, misleading information could lead to over or under application of S fertilizer.

S fertilizer recommendations
Table 1 provides my suggested guide to interpretation of soil test results. First, I suggest looking at the 0 to 6 inch depth to decide if the surface soil is deficient. Then, look at the combined 0 to 24 inch depth samples. If both are deficient, S fertilizer is very likely needed. However, it is relatively common to have adequate SO4-S within the 0 to 24 inch depth, while the 0 to 6 inch depth is low in S and requires sulphate fertilizer to ensure adequate crop establishment and root growth until roots have penetrated into the subsoil.

The maximum safe rate of SO4-S that can be applied with the seed for cereal crops with a 10 per cent seed-bed utilization (SBU) is about 20 lb/ac of SO4-S, assuming 30 lb/ac of phosphate fertilizer is also seed-placed, depending on soil moisture conditions and the opener type used.

For canola, the safe seed-placed SO4-S rate should not exceed 10 lb/ac when using a 10 per cent SBU, assuming 10 to 15 lb/ac phosphate fertilizer is also seed placed.

Single and double disc no-till drills may cut a fairly narrow furrow and place the seed and fertilizer in very close proximity in the bottom of the seed furrow. These drills place the fertilizer in a concentrated band with the seed and may have an SBU as low as five per cent, which could result in damage to crops.

Indirect causes of S deficiency
S deficiency in canola or other crops can occur despite the adequate application of S fertilizer. Any stress condition that may cause root pruning or restricted root growth can potentially induce S and other nutrient deficiencies.

Herbicide carry-over, acidic soil or a soil hardpan layer may cause restricted root growth and restrict SO4-S uptake from subsoil, leading to deficiency symptoms. Root rot diseases, some of which are preventable with seed treatment, can induce development of S deficiency.

S fertilizer types
S fertilizers are most commonly available in either the soluble sulphate form or elemental forms. Fertilizer that contains sulphate, such as ammonium sulphate (21-0-0-24), is excellent for crops grown on deficient soils. Provided there is adequate soil moisture, ammonium sulphate dissolves quickly to release SO4-S, the sulphate form that is readily available and taken up by plants. Other products such as potassium sulphate can be used to correct both potassium and S deficiencies, but this fertilizer product is relatively expensive and less commonly available.

Elemental S products, such as 0-0-0-90 or 0-0-0-95, are becoming increasingly popular, but elemental products must be carefully managed to be effective. Elemental S fertilizers are relatively insoluble. Plants cannot take up elemental S. These fertilizers must be converted to SO4-S first before plant uptake can occur, which can take months to several years. Other newer products contain both SO4-S and elemental S, such as MicroEssentials S15 (13-33-0-15S). 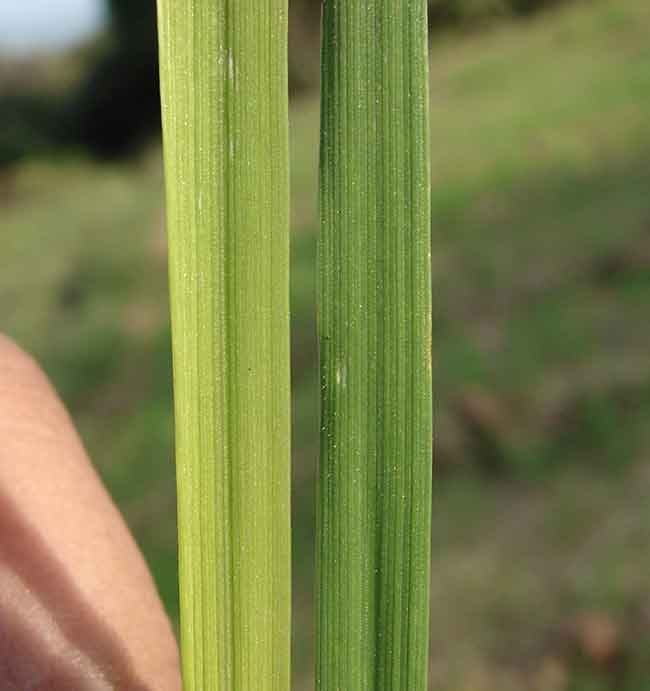