Potassium (K) is required by all plants and is taken up in relatively high amounts by most crops. Although K deficiency across the Prairies is less common than nitrogen, phosphorus or sulphur deficiencies, continuous cropping is resulting in declining soil K levels. Today, about 25 per cent of Prairie soils are estimated to have slight to moderate K deficiency.

Soil potassium
The total amount of K in soil often exceeds 40,000 to 50,000 lb/ac in the top six inches of a clay loam soil. About 90 to 95 per cent of total soil K is contained in clay minerals but is locked within the structure of the clay and is not available to plants. About five to 10 per cent of total soil K slowly becomes available to plants due to weathering of clay minerals, unlocking K from within.

Soil tests attempt to measure available and exchangeable K in soil to determine the K-supplying power of soil K for crop production. Available and exchangeable levels generally range between 100 and 1000 lb/ac in the top 0 to 6 inch depth of soil. A minimum of 200 to 250 lb/ac of K in the top six inches of soil is generally required for adequate growth of most annual crops.

K only occurs in soils in inorganic form and does not make up part of the soil organic matter. K in soil solution and in exchangeable form occurs as a positively charged ion K+ and is adsorbed onto the surface of negatively charged soil particles. As a result, soil K tends to be fairly immobile in soil and is not subject to leaching or downward movement in soil.

Soils with the greatest potential for K deficiencies are the coarse (sandy) and medium (loam) textured soils in the Black, Dark Gray and Gray soil zones as well as organic soils.

Crop potassium requirements
Table 1 shows the K content of seed and straw of commonly grown crops. For most annual crops, the majority of K remains in the leaves and straw with only a small portion of K in the seed. As a result, K removal from the soil is relatively low when only the grain of crops is removed and the straw left in the field. K removal is much higher with forage or silage crops as all aboveground biomass is removed from the field. If the forage is fed to livestock and the manure is returned to fields, much of the K will be returned to the soil.

Soil testing will determine the need for K fertilizer. Across the Prairies, response to fertilizer has been correlated to the amount of soil K extracted from the soil with ammonium acetate and with the modified Kelowna method which includes ammonium acetate. Soil test K correlation work has been done with the 0 to 6 inch sampling depth. Ensure to sample the 0 to 6 inch depth separately from deeper depth samples to accurately determine K fertilizer requirements.

The probability of K response above a soil test level of 250 lb/ac is low. However, at soil test K levels between 250 and 300 lb/ac,   producers should consider a maintenance application of  15 to 30 lb K20/ac to help replace K taken up and removed by crops. This application could also potentially increase crop yield in areas of a field that may have slightly deficient soil K levels.

A response to potassium chloride (KCl) fertilizer is sometimes obtained with cereal crops on soils not considered deficient in K. Research done principally in Oregon, Washington and South Dakota has shown that the presence of chloride (Cl) in KCl fertilizer can result in increased yield through the suppression of plant diseases such as take-all rot in wheat and barley.

Since soil K is not mobile in soil, placement of K fertilizers with or near the seed is usually the most effective and efficient method of application, but the rate of application must not be greater than the seed can tolerate. KCl is a salt and if too much KCl or a combination with other fertilizers that have a high salt index are placed with the seed, a “salt effect” can reduce seed germination and emergence. The salt effect of fertilizer will interfere with the moisture uptake by the seed and can result in the death of a germinating seed.

The safe level of K that can be applied with the seed depends on the crop. In general, smaller seeded crops such as canola have a much lower tolerance than cereal crops. The clay and organic matter content of the soil and the soil moisture content will also have an effect on possible germination problems.

Often K fertilizer cannot be placed with the seed as the maximum amount of phosphate and sulphur fertilizer is already being seed-placed. The alternative is to sideband or mid-row band K fertilizer at the time of seeding. The fertilizer should be banded at least 1.5 inches to the side and preferably about 1.5 inches below the depth of seeding.  When higher K fertilizer rates are needed, banding prior to seeding is another good option. 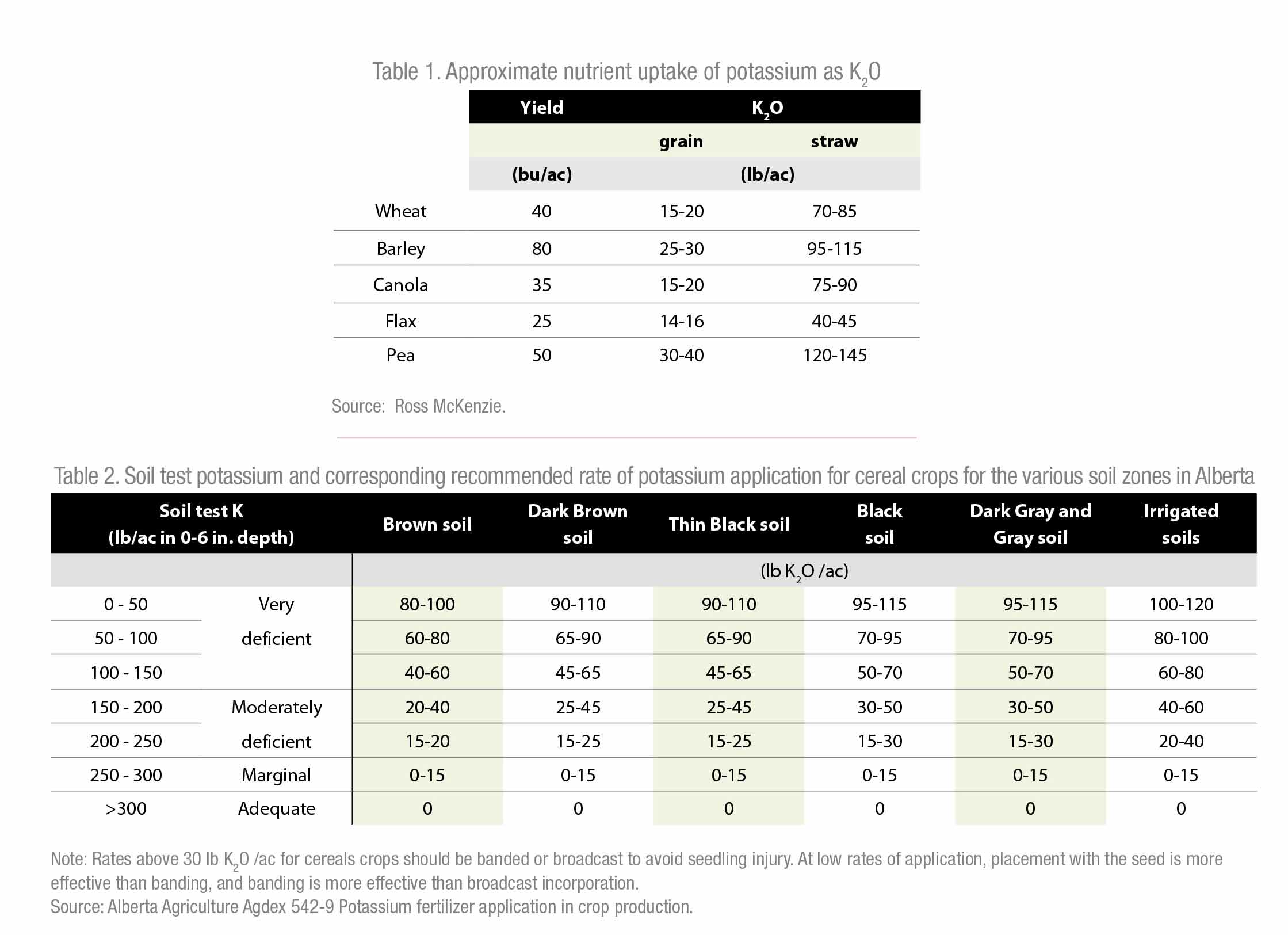 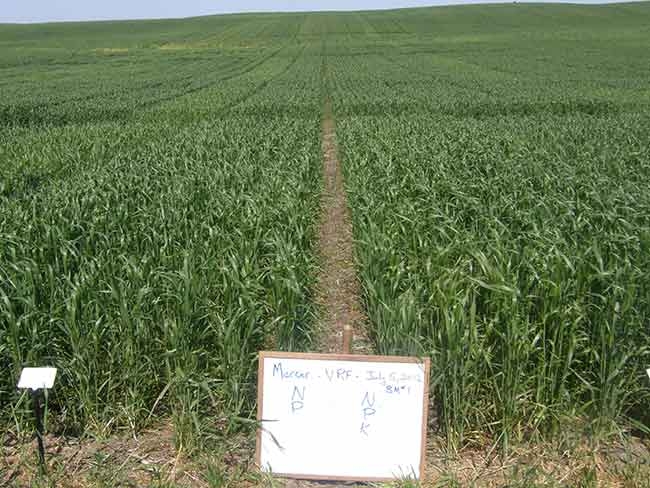 Variable rate fertilizer trial on dryland near Lethbridge with wheat examining N+P strip on left to N+P+K strip on right. No response to K was observed or measured at this site Potassium (K) is required by all plants and is taken up in relatively high amounts by most crops.
Print this page