In Western Canada, more phosphorus (P) continues to be removed in cropping systems than is being replaced. On average only about 75 per cent of P is being replaced every year, and although the gap is closing, it is probably not quick enough. 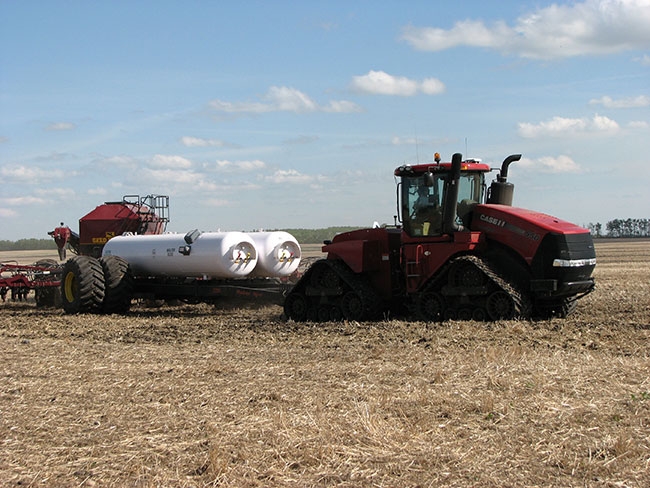 Recent data shows that soil test P levels in Saskatchewan are probably the lowest in Canada at 14 parts per million (ppm), Alberta at 21 ppm and Manitoba at 19 ppm. Ontario is considerably higher at 35 ppm in their primarily corn and soybean cropping systems, and can actually have the opposite problem of excess P.

“Research shows that in Saskatchewan, and other parts of Western Canada, the critical level of P is 15 ppm in the soil,” explains Stewart Brandt, researcher with the Northeast Agriculture Research Foundation (NARF). “The further below that level, the less efficiently the crop uses fertilizer P and the more fertilizer P gets tied up in unavailable forms than is being released to the soil. Therefore, building soil P levels to above 15 ppm is very important. It is more efficient to maintain soil P fertility than to restore it if it is depleted.”

Brandt says there are some reasons why growers may be under applying P to their cropping systems. A lot of focus is on N because deficiency symptoms are much more visible than P deficiencies. “The notion that seed-placing P is the main strategy may be over emphasized, because only limited amounts of P can be safely placed with the seed,” Brandt says. “In most cropping situations, there is no way to safely replace all of the P required by crops through seed placement. There is lots of evidence that side-banding is a very good and efficient method of applying P fertilizer. Although there is less information available for mid-row banding, preliminary research is showing that placing the safe rate of P with the seed and topping up to the recommended amount with a mid-row fertilizer band is expected be a good option as well. Growers can consider seed-placing the maximum safe rate of P with each crop, and then sideband additional P to meet recommended levels.”

For soils that are depleted or below the critical 15 ppm, then broadcasting or banding P at high rates as a one-time correction is an option. Research conducted at the University of Saskatchewan in the mid 1980s compared a single broadcast application of 180 pounds per acre (lbs/ac) of P2O5 in year one with annual applications of 45 lbs/ac for four years on a soil that tested five ppm of available P. The initial high rate application yielded more than the annual applications despite having the same total amount applied over the four years. The yield difference of about two bushels/acre/year was due to the P deficiency being corrected the first year with the high rate, rather than taking four years with the annual applications.

Brandt validated this work on five farmer fields in Northeast Saskatchewan by banding high rates of P on fields that tested between seven and 10 ppm of available P. Two separate strips were applied on each of the five fields and the farmer managed the whole field as he would normally. At harvest, yield maps were generated for the field and analyzed to measure treatment effects. “Not all yield maps were usable,” Brandt says, “but those that were showed yield responses similar to those in the university study. The cost of the high rate fertilizer was recovered in three to four years. Thereafter, we would expect that the yield benefit would remain to provide a return on this investment almost indefinitely.”

Therefore, look at soil tests and try to build soil P where it is below 15 ppm. There is lots of evidence that applying fertilizer P above crop removal rates can build soil P with very little risk of leaching out of the soil because it is immobile. When fertilizer P is priced relatively low, it likely makes sense to go in and broadcast P on those areas of fields that test low in available P, don’t rely on seed-placed P as the only strategy.

Also consider crop rotation, because not only do different crops require different rates of P, they also use and take up P in different ways. Some crops rely on mycorhizzae to help with nutrient uptake, which can be suppressed by fertilizer P. Mycorrhizal fungi form associations with crop roots to get energy from the crop and in exchange they effectively increase area of roots to enhance nutrient uptake. For example, canola and mustard are non-mycorrhizal crops and can more easily access available fertilizer P.

Cereals are mycorrhizal but not as dependent as other crops like pulses and flax, which are heavily reliant on mycorrhizae. The mycorrhizal fungi prefer to access soil available P that is more uniformly distributed in the soil. Therefore, some of these crops have a reputation of not responding very well to fertilizer P applied in the year of application, so building soil P levels ahead of these crops can be a benefit.

“For most of our cool season crops that we generally grow, the target level for P is 15 ppm,” Brandt adds. “We are starting to see other crops like soybeans grown in this area, which are much higher users of P. The recommended target for crops like soybeans or corn in the more common growing areas in the U.S. and Canada is closer to 20 ppm. Planning ahead for the higher yielding crop varieties and different crops in rotation means focusing on elevating P levels to at least 15 ppm and above to maximize fertilizer use efficiency. Soil testing regularly is a good idea to know what direction soil P levels are going in your fields. Based on our research results, applying high rates of P to elevate levels above 15 ppm on low P fields or field areas, then manage normally after that provides a return on investment in about three-years. Particularly on owned land, it is likely prudent to start building and maintaining soil P levels above removal rates over the long term, to maximize crop yield potential and returns.”