Soil tests cannot predict with 100 per cent accuracy when crops will respond to added phosphate fertilizer because the frequency of crop response can be strongly influenced by environmental conditions, particularly soil temperature and moisture early in the growing season. Also, different crop types use different mechanisms to aid in taking up soil P.

Various soil test methods have been used to estimate plant available soil P to make phosphate fertilizer recommendations for crops in Western Canada. Extensive field-testing in the 1950s led to the establishment of the Olsen method (Olsen et al. 1954) in the U.S., also referred to as the sodium bicarbonate or “bicarb” method. The Olsen method was developed specifically for higher pH, alkaline soils (soil pH >7) and was not intended for use on acid soils. This method has been widely used as the basis for making P fertilizer recommendations in Saskatchewan and Manitoba (Cowell and Doyle 1993).

Early work by the University of Alberta led to the use of the Miller-Axley method as the basis for P fertilizer recommendations in Alberta (Robertson 1962). This was an acid extractant that worked satisfactorily with lower pH, acidic soils (soil pH <7) but worked very poorly with alkaline soils.

The Kelowna method was developed at the B.C. Ministry of Agriculture soil testing lab in Kelowna in the mid-1980s (Van Lierop 1988). The method was analytically convenient and worked well to determine plant available soil P over a broad soil pH range with both calcareous and non-calcareous soils.

By the early 1990s, two modified versions of the Kelowna method were developed by Qian et al. (1994) at the University of Saskatchewan, and Ashworth and Mrazek (1995) at Norwest Labs. Acetic acid was added to the Kelowna extract by both groups to allow extraction of both P and potassium (K) with one extraction solution. The concentrations of ammonium acetate and acetic acid are slightly stronger in the Ashworth and Mrazek modification.

McKenzie et al found the modified Kelowna methods were well correlated for all soil types in Alberta and these have been the recommended test methods for Alberta soils since 1994. In Manitoba and Saskatchewan, most of the P soil test correlation has been with the Olsen method. Today, the Olsen P soil test method is recommended for growers in Manitoba, while in Saskatchewan both the modified Kelowna or Olsen methods are used.

Most Western Canada soil testing labs have adopted one of the two modifications of the Kelowna method. Most labs will also determine P by the Olsen method when requested. Exova and Farmers Edge soil testing labs use the Ashworth and Mrazek (1995) method and ALS lab uses the Qian et al method (1994).

Soil test P correlation work across the Prairies has been with 0 to 6 inch sampling depth. Ensure to sample the 0 to 6 inch depth separately from deeper depth samples to accurately determine P fertilizer requirements.

A new method to test for a wide range of nutrients including plant available P is the Plant Root Simulator (PRS) probes (Qian and Schoenau 2002). Originally developed at the University of Saskatchewan, PRS probes are ion exchange resin membranes held on plastic stakes that are inserted into a moist soil sample to estimate nutrient supply. There are two probes, one to adsorb cations and one to adsorb anions. One limitation of this method is there has been less field calibration with P fertilizer research trials versus the modified Kelowna and Olsen methods.

Some fertilizer dealers and agronomists use soil testing labs in Eastern Canada or the U.S. that determine soil P using other soil test P methods, such as the Bray method (Bray and Kurtz 1945). This method uses unbuffered ammonium fluoride and hydrochloric acid. Bray and Kurtz developed the method in the 1940s specifically for acid soils but not for use on alkaline soils (pH > 7.0). The test is not recommended for alkaline soils because it results in very inaccurate available soil P estimates. Because of the inaccuracies of this method, it has not been calibrated to western Canadian soils and its use is not recommended for making P fertilizer recommendations.

Robertson, J.A. 1962. Comparison of an acid and an alkaline extracting solution for measuring available phosphorus in Alberta soils. Can. J. Soil Sci. 42: 115–121. 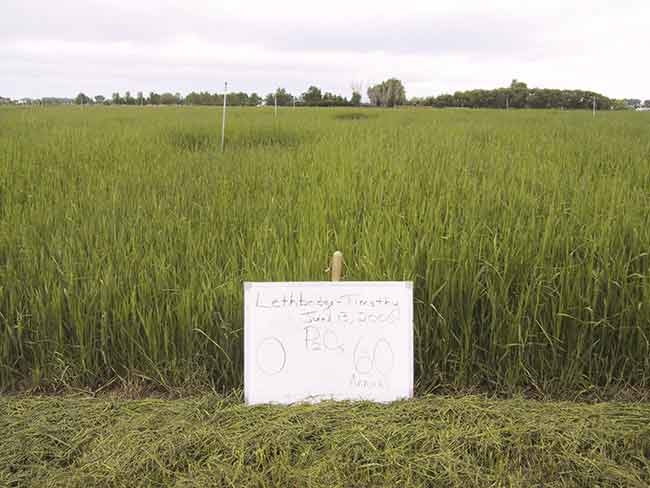 Timothy response to annual broadcast P fertilizer in southern Alberta. The goal of a laboratory soil test for phosphorus (P) is to estimate how much soil P will become available to plants during the growing season.