Features Agronomy Weeds
When is the best time to spray soybeans?

To get the most out of your post-emergent herbicide applications on soybeans, one of the things to consider is the time of day you spray. A recent Ontario study has found that herbicide effectiveness tends to be greatest for applications during the warmer, brighter parts of the day, although the impact varies depending on the herbicide and the weed species. In some situations the time-of-day impact is big enough to affect soybean yields.

The time-of-day effect was greatest for annual broadleaf weeds.

“A lot of growers apply their herbicides early in the morning or late at night, because that’s when the wind speeds are lowest and they want to reduce the impact of spray drift. But we were finding that sometimes we were getting poorer weed control from herbicides that we knew should have been effective. As we investigated it more, we found that if we applied the same herbicide at midday we would get better control. So we set up a study to look at that further,” explains Dr. Robert Nurse, a weed scientist with Agriculture and Agri-Food Canada at Harrow.

Nurse and Dr. Peter Sikkema, a weed management researcher at the University of Guelph’s Ridgetown Campus, worked together on this three-year study, which was funded by the Grain Farmers of Ontario.

The study’s aim was to find out the effect of time of day for some post-emergent herbicides commonly used in soybeans in Ontario, so growers could use that information to help maximize herbicide effectiveness and reduce weed escapes.
The field trials took place at Ridgetown and Harrow, and involved six post-emergent herbicides: Basagran, Classic, Reflex, Roundup, Pursuit, and Assure II. Each herbicide was applied at 6 a.m., 9 a.m., 12 noon, 3 p.m., 6 p.m., 9 p.m. and midnight. 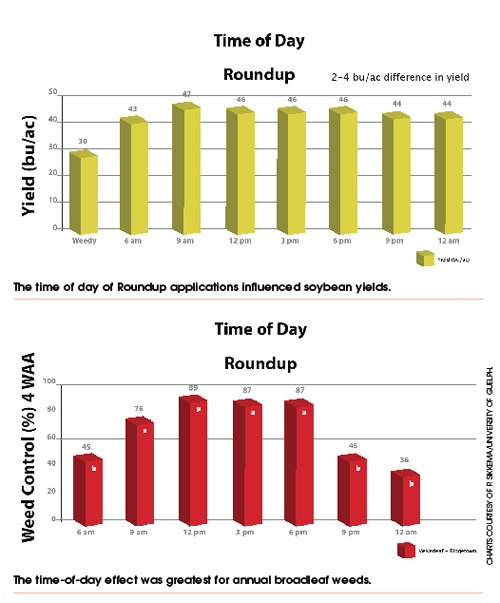 The importance of the time-of-day effect depended in part on the weed species. Generally speaking, there was a greater effect on annual broadleaf weeds such as velvetleaf, common ragweed and redroot pigweed, while annual grasses including green foxtail and barnyard grass were least affected.“All herbicides are different, so you can’t make a blanket statement in terms of what happened. However, generally speaking there was maximum herbicide performance when the herbicides were applied between 9 a.m. and 6 p.m. Herbicide activity tended to decrease with really early morning applications as well as applications made late in the evening,” explains Sikkema.

The time-of-day effect also varied with the herbicide. With Assure II, the researchers found little time-of-day impact. For Roundup, Classic and Pursuit, the results showed a time-of-day influence to varying degrees; Roundup showed only a slight effect. All three herbicides showed a general trend for improved control when applied between about 9 a.m. and 6 p.m., with the greatest impact for broadleaf weeds and less of an effect for grasses.

In some cases, the time-of-day effect influenced soybean yields. For Roundup, there was about a 3- to 4-bushel/acre difference between the midday applications and those in the late evening or early morning.

Sikkema notes, “You don’t always get a yield impact due to what time of day you spray. However in environments that are more stressed, where you have heavier weed pressure, where the weeds may be larger at the time of application, you get a greater time-of-day effect, and that can translate into a difference in yield as well.”

Why does time of day matter?

Why does time of day influence herbicide efficacy? Sikkema says several studies by researchers in the United States have tried to correlate the time-of-day effect with various factors. “The two factors with the best correlation are air temperature and leaf orientation.

“In terms of temperature, it’s known that almost all metabolic processes in a plant increase with increasing daytime temperature, and therefore herbicides become more biologically active. As well, it’s thought that it is easier for the herbicide to cross the cuticle [protective waxy covering on the leaf surface] since it becomes less viscous at warmer temperatures, and there’s increased membrane permeability, so it’s easier for the herbicide to penetrate into the living portion of the plant. You have greater rates of diffusion of the herbicide into the plant. Therefore, you get improved herbicide efficacy as temperatures go up. And temperatures can vary quite a bit over a 24-hour period, so that has a significant impact on herbicide efficacy.”

Changing leaf orientation over the course of a day is important because it influences herbicide interception. Sikkema says, “In some plants, the leaves tend to be almost horizontal during the brightest sunlit hours of the day. Then from midnight to 6 in the morning, in some plants the leaves drop so they are almost vertical, or in some other plants the leaves move up and almost clasp the stem. In either case, you have less interception of the spray by the leaves during the night period and therefore poorer weed control.”

Other factors, such as heavy dew, relative humidity and sunlight levels, may also influence herbicide penetration into the plant and/or translocation through the plant.

Overall, for Roundup, Pursuit and Classic, spraying between 9 a.m. and 6 p.m. helps maximize weed control in soybean. If you’re facing windy weather during those hours, Nurse advises monitoring the size of the weeds in the field. Even though you may get reduced control by spraying early in the day, it may reduce the chances of a drift event.