With full global export approval, 2017 was a major breakthrough year for Roundup Ready 2 Xtend soybean acreage in Canada. Approximately 700,000 acres were grown in Canada with about 250,000 acres grown in the West, mostly in Manitoba. 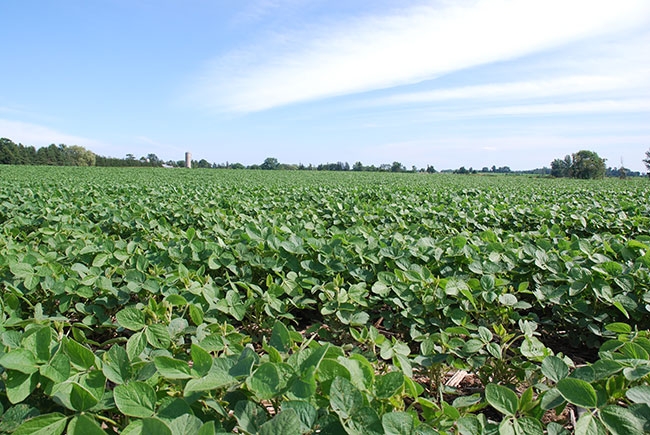 Seed grower Murray Froebe with Agassiz Seed Farm in Homewood, Man., has a leg-up on most growers, having grown Roundup Ready Xtend soybean for the last three years. “I’m excited about this technology. It is extremely good on wild buckwheat, and with the new genetics coming out, I believe that it will help raise soybean yields above the plateau that we are stuck at,” he says.

Roundup Ready 2 Xtend soybeans are tolerant to both glyphosate (Group 9) and dicamba (Group 4) herbicides. Two herbicide options can be used with the system. XtendiMax is a stand-alone dicamba formulation that can be tank-mixed with Roundup WeatherMax (glyphosate). Roundup Xtend is a mixture of glyphosate and dicamba. Both use Monsanto’s VaporGrip technology that helps to reduce dicamba drift. The VaporGrip component reduces the chemical volatility of the product compared to older formulations of dicamba, which helps reduce off target movement but does not help reduce physical particle drift when making an application.

Application timing for both herbicide approaches is flexible. Both products can be applied pre-plant burndown or pre-emergent after planting but prior to crop emergence, and up to twice post-emergent.

“Unfortunately the Xtend system doesn’t control Roundup Ready volunteer canola, the number one weed issue in soybean in Manitoba (according to the 2016 Manitoba Weed Survey). However, use of Roundup Xtend does give growers improved control of wild buckwheat, the number two weed issue in soybean. It’s also likely to become an important tool for growers that have glyphosate-resistant kochia, especially since 99 per cent or more of kochia is already resistant to Group 2 herbicides,” says Jeanette Gaultier, former weed specialist with Manitoba Agriculture at Carman, Manitoba.

Other research studies looked at control of glyphosate-resistant weeds found in Ontario including ragweed, waterhemp, Canada fleabane, and common ragweed. Generally, a pre-plant and/or a pre-plant and post-emergent sequential application of dicamba provided the best control of these glyphosate resistant weeds, often approaching 100 per cent control.

“The newest weed threat in Manitoba’s near future is waterhemp. We currently have only a few known fields with a low level of waterhemp plants. But every year it inches northward through North Dakota. Although the Manitoba waterhemp seed has not been sent for resistance testing yet, we are encouraging growers to treat it as resistant to both glyphosate and Group 2 herbicides,” Gaultier says.

For glyphosate resistant waterhemp control in Ontario, dicamba applied pre-emergent provided poor control. However, dicamba post-emergent at the high label rate of 1.71 litre per hectare (600 g.a.e/ha) provided 91 per cent control. When dicamba was applied both pre and post, control moved up to 95 per cent. A second option was the application of dicamba with Outlook (dimenthemamid-p; Group 15) herbicide. Again, best control at 97 per cent was achieved with a pre and post application of the herbicides.

“Our research is showing that the first time in the field with a herbicide, pre-plant or pre-emergent, we encourage growers to put XtendiMax or Roundup Xtend in the tank at the high application rate to maximize the benefits of residual weed control,” says Adam Pfeffer, technology development manager with Monsanto at St. Thomas, Ont.

Froebe has used XtendiMax at all three application timings. He has applied it as part of a pre-seed burndown, after planting but before crop emergence, and in-crop.

“Under cool conditions, soybeans take seven to 14 days to emerge, and during that period is a great time to apply XtendiMax. It is a great tool to help get the crop off to a clean start and we are seeing residual control up to three to four weeks after application,” Froebe says. “I like using XtendiMax because I have flexibility in the application rate of dicamba.”

As a seed grower, Froebe typically does two in-crop applications with glyphosate. He is not sure the second application provides an economic return from higher yield, but it does keep his fields cleaner.

“The fact that the dicamba, at the Xtend soybean rate, provides residual control is also a benefit for flushing weeds like kochia. I like to see growers use a residual product with their glyphosate in soybean because it is a longer season crop with a longer critical weed free period compared with wheat or canola,” Gaultier says.

“It’s never a bad idea to use multiple modes of action on target weeds, especially with glyphosate. We have to be cautious though, because only the dicamba will have activity on glyphosate-resistant weeds like kochia and waterhemp, which increases the risk of developing Group 4 resistance in those weeds if growers only use the Xtend system,” Gaultier says.

How growers end up using Xtend herbicides will depend on their own farm operation. The flexibility of application timing and herbicide rates provide growers the opportunity to tailor weed control based on their individual weed problems.

“So far, the pre-emergent application of Roundup Xtend or XtendiMax best addresses the cool season weed spectrum in Manitoba. But we are starting to see a shift in weed species in our soybeans, especially in the eastern, Red River Valley and south central regions of the province. Many of these species, like hairy galinsoga and nightshades, emerge much later than our traditional cool-season weeds and may prompt growers to switch to an in-crop application in Xtend soybean,” Gaultier says.