There’s nothing like lining up a bunch of plows to spur the competitive spirit in. Although the moldboard plow demonstration at Canada’s Outdoor Farm Show was not set up to be a contest, judging from the oohs and aahs in the crowd, there were a few clear winners. Below is a description each plow, as provided by the manufacturer.

Kuhn Farm Machinery
Model: Kuhn Vari-Manager Semi-Mount
Rollover Plow
Kuhn North America is said to be one of the world leaders when it comes to tillage technology. It provides a full line of mounted and semi-mounted rollover and conventional plows. The plow that was featured at COFS was an in-furrow, semi-mount rollover plow with a two-wheel undercarriage. The plow features excellent manoeuvrability and stability, and its built-in suspension system allows for safe transportation.

Kuhn plows can accommodate all soil types. Bottom models 7 to 12 offer an on-land hitch option as well. Like most Kuhn plows, the Vari-Manager Semi-mount Rollover plow has spring-protected coulters and hydraulic Vari-width, available with a choice of moldboards, trash boards and skimmers.

Lemken
Model: Vari-Diamant 10 “X”
In Germany, Lemken has been making moldboard plows since 1780. It is known simply as the “plow shop.” The company’s latest addition, the Diamant, is available from five to nine furrows in a number of different versions. It features a number of options, including hydraulic stone security, variable working width, multiple skimmers, plain or serrated disc coulters, and plain or slatted moldboards. Choose the on-land version and plow with the tractor wheels in or out of the furrows.

Of specific interest to Ontario corn producers is that the plow has huge frame clearance of 120 centimetres in length. The ever-popular slatted moldboard has several advantages, including reduced friction areas, which can save power and reduce wear and tear. It can be used in most soil types and each of the slats can be individually replaced.

Kongskilde Industries Inc.
Model: Overum CVL698-6 Furrow Roll Over
This plow is a semi-mounted six-furrow roller with 22-inch, spring-loaded ripple coulters. Its features include hydraulic lead furrow width adjustment and non-stop hydraulic stone release and reset, which allow the plow leg to trip both up and side to side. As well, the hydraulic pressure can be adjusted to accommodate different soil types. This plow features a single rear flotation tire with hydraulic steering. For narrow transport width, it can roll to a butterfly position. Kongskilde offers a variety of plows, including both conventional and semi-mount types.

Salford
Salford began manufacturing moldboard plows in 1978 in the village of Salford, Ontario. Since then, its line of products has grown to a full line of semi-mount plows (up to an eight-furrow), as well as two articulating models from seven to 14 bottoms that operate on land. The Salford plow is said to be the only plow in the world that can accommodate both European and North American needs since it offers a variety of style bottoms best suited to specific regions.
“The standards for residue clearance that are now recognized and replicated worldwide were set by Salford many years ago and this all-Canadian plow remains today the industry leader in managing residue in high-yielding, high-residue crops,” writes Jim Boak, national sales manager for Salford.

Vogel & Noot
Model: ©plus XMS 1050 Vario
One of the major plow manufacturers in Europe, Vogel & Noot offers from two- up to 12-furrow semi-mounted plows for tractors up to 500 horsepower. The plow on demonstration was a four-furrow model with hydraulic non-stop stone release. The plow is extremely compact, making it suitable for a variety of soil and field conditions.

“With its big clearance (105 cm length and 78 cm height), and in combination with the special body form (WXL430), it provides a perfect job, even in extremely hard soil conditions, as well as with lots of trash,” says the event writeup. This plow offers a working width of up to 55 centimetres per body and a depth of up to 40 centimetres. The “wearing parts” are specially heat treated to provide extreme resistance and a longer service life, as well as reduced traction power.
In order to help keep the plow straight before turning, it has been equipped with an automatic beam re-centring device. It has also been equipped with a hydraulic side shift for front furrow adjustment, making setup that much easier.

Rabe
Model: Rabe VHA 120 MS
Based in Germany, Rabe has been manufacturing plows since 1889. Known for its superior quality and unsurpassed working results, Rabe offers a variety of plows, from mounted, semi-mounted and on-land plows that vary in size. Mounted plows can have from three to six furrows. Semi-mounted plows can have from five to 10 furrows with the option of a cart. All of Rabe’s plows can be equipped with any of its moldboard options, including three solid body boards and two slatted body boards. Rabe VHA 120 MS requires the use of a 120- to 150-horsepower tractor. It has a hydraulic stone protection system and a shear bet on every furrow, keeping the plow well protected. “The working width adjustment is hydraulically operated from the first furrow and has a hydraulic angling device to adjust the traction point and to gain clearance for the rollover process,” says Rabe’s writeup. “The combiwheel is not only used as a depth wheel, but can also be used as a transport wheel.”

The furrow width can be increased from 14 to 22 inches, increasing the work rate by as much as 40 percent. This, says Kverneland’s sales rep, Owen Kitsemetry, increases seasonal capacity and enables significant cost reductions, including up to 20 percent less fuel consumption.

PG plows are available in various sizes from five to eight furrows. They can be used in varying soil types within a field, and are able to work up and downhill, ensuring a neat finish around obstructions, including trees and telephone poles. Its mid-frame wheel position and compact headstock design ensure tight turning ability on headlands and narrow gateways.

Gregoire-Besson
Model: Gregoire-Besson SPER 8
Manufactured in France, the SPER 8 is one of four models by Gregoire-Besson. This variable plow ranges from 12 to 20 inches with the ability to add furrows later. It features a hydraulic safety device with double articulation to reach clearance of up to 32.5 inches under the point. It is possible to adjust the sensibility from 600 kilograms to 2300 kilograms of hydraulic pressure, if necessary.

“The turnover device features the Gregoire-Besson patented Rack and Pinion system operated by two hydraulic rams that turn the plow from side to side with little stress load on the tractor,” writes company rep Bill Vermilyea. This model is available in an on-land version for larger tractors with dual tires. This plow offers some additional options, including an anti-plug kit, coverboards, skimmers and moldboards. 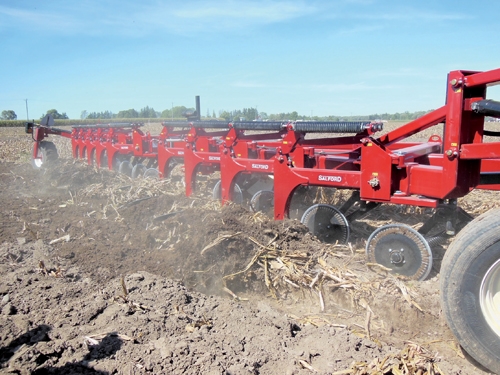 The Salford plow is said to be the only plow in the world that can accommodate both European and North American needs. There’s nothing like lining up a bunch of plows to spur the competitive spirit in.