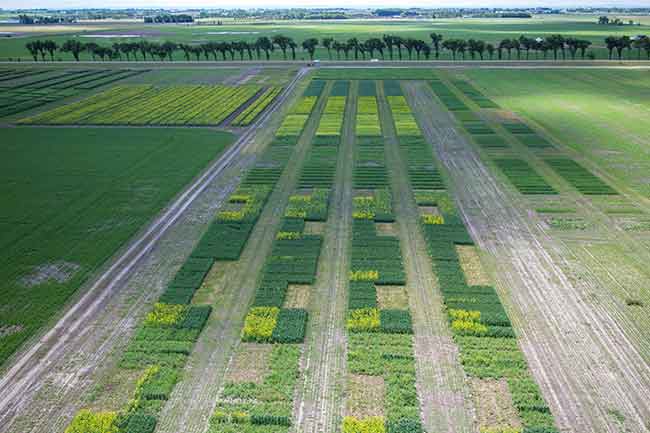 The time of day when you spray often makes a significant difference to herbicide efficacy. That’s one of the overall findings from a recent Alberta project. The sometimes-surprising results are leading the project team to explore the reasons behind the data and to look at a possible tool to help producers make time-of-day spraying decisions.

The idea for this project was sparked by the growing use of night spraying. “GPS-guided autosteer has given farmers the ability to spray during the night. So we wondered, is night spraying as effective as daytime spraying?” says Ken Coles, the general manager of Lethbridge-based Farming Smarter.

Coles led the three-year project (2012 to 2014), which was funded by the Alberta Canola Producers Commission and Alberta Barley Commission. The project compared early morning (4 a.m. to 5 a.m.), midday (noon to 1 p.m.), and night (midnight to 1 a.m.) timings for herbicide applications. This small plot, replicated research project included a pre-seed burndown study and an in-crop study, and involved a range of herbicide groups.

The pre-seed burndown study, which took place at Lethbridge, evaluated herbicide efficacy for controlling natural weed infestations in the plots. The treatments involved glyphosate and several products that were becoming popular as tank mixes with glyphosate (see table).

The in-crop study was carried out at Lethbridge by Farming Smarter, at Bonnyville by the Lakeland Applied Research Association, and at Falher by the Smoky Applied Research and Demonstration Association. The crops included wheat, peas, Liberty Link (LL) canola, and Roundup Ready (RR) canola. They were seeded on two seeding dates each year to try to make sure the herbicide applications would occur in range of weather conditions. Simulated weeds were seeded in the plots: tame mustard for a broadleaf weed, and tame oats for a grassy weed. Herbicides from various groups were compared (see table).

“Herbicides are registered to work in a wide range of conditions so I didn’t really expect to see a tremendous difference in efficacy between the different timings. But what I started to see right away was often the early morning application was the least consistent of any timing,” Coles says.

“Having grown up in southern Alberta, I found that particularly interesting because it is almost inbred in our culture that we wake up really early to spray, to beat the wind. But the project’s results show the early morning timing is often coming at a cost for herbicide efficacy.”

For canola, Liberty and Roundup (Vantage Plus Max II) usually performed best at midday and worst in the early morning. He notes, “I was surprised that Roundup had a strong time-of-day effect. We expected that for Liberty – it is well known that you should spray Liberty in the heat of the day because it needs the heat to activate it as a contact herbicide.”

The story was somewhat different for wheat and peas. “We didn’t see nearly as strong a correlation with time-of-day on the wheat herbicides; generally, they worked the best under most conditions. The pea herbicides, Odyssey and Select, tended to work better when sprayed at night.”

So Coles suggests a general guideline would be to spray wheat in the early morning, canola in the middle of the day, and peas at night.

Generally, broadleaf weeds tended to be more sensitive to the time-of-day effect than grassy weeds.

On grass control, Coles points to another interesting finding: “Liberty is known for not having the greatest control of grassy weeds, but when we sprayed Liberty at night, its grass kill improved. This type of information could be helpful when dealing with herbicide-resistant weeds. Let’s say you’ve got Group 1 and 2-resistant wild oats and you don’t have a lot of options left to kill them. Spraying Liberty at night on Liberty canola might help keep those resistant wild oats under control.”

The results showed some strong patterns overall, but not every site in every year followed the general trends. To better understand the reasons behind the results, Coles and his team looked closely at the weather data for the trials because of the profound effect weather can have on herbicide efficacy.

“Usually, our conditions were pretty dry, so during the day, the temperature rose and the humidity dropped. Then at night, the temperature dropped and the humidity rose. But, for instance, if we had a rain event with lots of moisture and maybe no wind, then that pattern really got jumbled up. It was harder to predict the [herbicide efficacy] results when more moisture was present,” Coles says.

The project team was able to identify the likely causes for some of the plot results that bucked the general trends. For instance, the results suggest that plants stressed by very dry soil conditions might have reduced herbicide translocation, resulting in poorer herbicide efficacy. Moisture stress may also change a plant’s form and structure, causing such things as leaf rolling or thickening of the protective waxy covering on the leaf surface – changes that could reduce the amount of herbicide entering the plant. It’s also likely that a heavy rainfall event shortly after spraying in one of the experiments washed away the herbicides, so those applications were almost totally ineffective.

The link between time of day and changing temperature and humidity conditions got Coles interested in Delta T. “Delta T is the wet bulb temperature minus the dry bulb temperature. The dry bulb is just a regular thermometer, and the wet bulb is essentially a thermometer with a wet sock on it. It measures the evaporative cooling effect, which is the same effect as if you jump out of the shower and stand in front of a fan – you feel cold.”

Delta T can be used to determine if conditions are optimum for spraying. The general guideline is that Delta T should be between two and eight or 10 (the upper limit depends on whether the spray is fine or coarse).

“When I mapped all of the Delta T values for all of our data, the poorest herbicide performance was between zero and two,” Coles says. So he dug a little deeper into Delta T.

According to Coles, very little academic research has been done on Delta T for spraying decisions. And most of that research has been in Australia, where growers use Delta T mainly to determine if conditions are too hot and dry for spraying. As Delta T rises above 10, the air gets very hot and dry, causing spray droplets to evaporate faster and volatile pesticides to vaporize faster, so herbicide effectiveness tends to be reduced.

If Delta T is below two, then the air is very moist. In the Australian literature, the reason given for not spraying when Delta T is below two is that the high relative humidity causes the spray droplets to be very slow to evaporate. So fine droplets tend to last a long time, increasing the risk of spray drift if a temperature inversion occurs.

A temperature inversion is when the air near the ground is cooler than the air above it. To check for an inversion, compare the temperature at the top of the crop canopy with the temperature at about eight to 10 feet above the canopy. The air in an inversion is very stable because the lower, cooler air is denser than the warmer air above. So there’s no vertical movement of air parcels; the airflow is horizontal. Although coarse spray droplets will fall to the surface fairly quickly, fine droplets will take a long time to fall and may float for long distances.

Inversions tend to be strongest and deepest just before sunrise, so they may be a factor in the generally poorer performance of the early morning applications in the project. Coles explains, “We always talk about not spraying when there’s a temperature inversion because of the risk of spray drift. But it’s also possible that inversion issues are resulting in poorer weed control on our own fields – basically not all of our fine droplets are hitting our targets. If that is the case, that might explain why we’re not getting as good control in the early morning: we have less spray coverage, especially with the finer droplets which are sometimes more easily absorbed in plants.”

One physiological factor could be that most metabolic process in plants increase with warming temperatures. So, as the day warms up from the relatively cool conditions at dawn, herbicides tend to become more biologically active. (However, if conditions get too hot, then plants will start to reduce their metabolic activity, slowing the rate of translocation and metabolism.)

Coles also suspects evaporative cooling could be important. “Early morning is when we have the highest humidity and the lowest temperatures. Then the wind comes in with really dry air and it dries off the plants really quickly. So my premise is that the evaporative cooling effect is sucking a lot of heat energy out of the plant, which stresses the plant. And a stressed plant is not going to uptake herbicide.”

From his initial look at Delta T, Coles thinks it might be a useful tool to help farmers make time-of-day decisions on herbicide spraying. Small hand-held units are available for measuring Delta T, so it’s easy to do. “It looks like avoiding spraying if Delta T is between zero and two is more important [in Alberta],” Coles says. “I think I would go somewhat higher than 10 [for the upper end of the optimum spraying range] and be comfortable.” However, he’d like to see more research on Delta T, especially on why spraying is less effective when Delta T is below two.

“We don’t have it all figured out, but it has definitely taken us onto an interesting path trying to understand the why,” Coles says. “And the more we know about herbicide effectiveness, the better job we can do at managing herbicides to increase yields, decrease weed seeds in the seed bank, and deal with herbicide resistance before it becomes an even bigger issue.”


Related
When is the best time to spray soybeans?
Understanding temperature inversions to avoid spray drift
Spray utility modifier Stick N Spray comes to Canada
In herbicides, timing is everything, too