No one wants to buy soybeans at a roadside stand, so there are fewer opportunities for grain farmers who want to capture more value at the farm gate. But a cleverly designed processing unit is helping some growers earn direct sales and become more self-sufficient with little extra effort or investment. 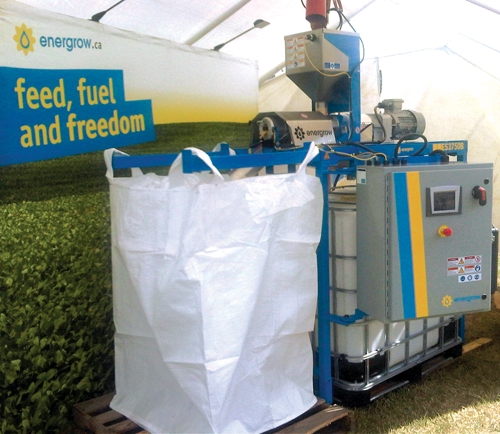 An Energrow press. No one wants to buy soybeans at a roadside stand

One increasingly popular company is helping farmers investigate the full potential of small-scale, on-farm feed processing. Jasmin Hofer of Energrow, a Newton, Ontario-based company that designed and produces a European-style, cold screw oilseed press, says she has another busy fall ahead of her attending shows and trying to keep up with information requests. While many of her customers are dairy farmers who produce directly for themselves, Hofer says she is also receiving interest from cash crop farmers.

“The big interest for them is that this is a system that can be left running and it’s not something that they have to babysit,” says Hofer.

Dr. Rex Newkirk, with the Canadian International Grains Institute, agrees that the machine’s ability to operate largely unsupervised is a convenient feature for farmers in this country. Newkirk became familiar with the company a few years ago and featured its system last year during an educational day that explored biodiesel opportunities on the farm. Newkirk says the system is unique because most competitive products have been imported, not designed specifically for the rigours of agriculture in Canada.

“Energrow has designed a system to deal with the fact that [Canadian farmers] don’t have a lot of staff to watch equipment, so they’ve put in safety systems to shut down if it runs out of seed and these kinds of things,” says Newkirk. “They’ve been very realistic in using the product as fuel and have taken a much more reasonable, sustained approach to that opportunity.”

Newkirk feels Energrow customers are among the most well informed operators of biodiesel and vegetable oil powered equipment and he directly attributes that to the company. Energrow ensures that any customer intending to use extruded oils as fuel or lubricants understands the importance of allowing the phospholipids to separate out over a two-week period and provide a filtration system that produces a fuel grade oil that meets European DIN51605 standards. Newkirk says he sees more success for these customers in converting their equipment to run on biofuels and feels this diligence will help to reduce petroleum dependency on the farm.

Eliminating energy costs
Familiar with the use of extruders to process feed on farms in Europe, George Heinzle has been looking for ways to cut his energy costs for years and he looked hard to include a press in his operation. Together with his wife and son, he milks 140 cows and runs a 600-acre cash crop operation where nearly everything is fed either by the bio-digestor and solar systems they maintain, or by the extruder. As leaders in on-farm energy efficiency, the Heinzles are exactly the type of candidates Newkirk describes as being ideally suited for an on-farm press, especially in volatile years like this.
“For the producers of the grain, it’s always good to see [price] spikes, but for the end user buying the product it’s a challenge to find ways to survive these ups and downs,” says Newkirk. “On farm, if you can produce some of your own meal, that can be pretty attractive.”

Heinzle says his press can process one tonne of seed every day, which produces enough feed for more than 300 cows and 80 litres of filtered oil. He preferred this press over the first model they tried on the farm because it does a better job of separating the oil out from the protein meal. Even though dairy cattle are more forgiving when it comes to higher fat rations than other livestock, Heinzle takes care not to waste the oil through excesses in the feed since he started fuelling a tractor with it.

“We call it The Vegetarian,” laughs Heinzle. “When the fuel prices are up like this, we get good value for our oil and since spring, it’s been running excellent.”

Converting his Ford 9280 articulate tractor wasn’t too difficult, says Heinzle, but it does require two tanks. This is so the engine can be started on 100 percent diesel until it’s warm, then switched to pure vegetable oil once it’s running and later switched back to diesel while it cools down for shut-off. This prevents the oil from jelling in the fuel lines. Though it’s a little inconvenient, Heinzle says, he gets more power out of the oil than he did out of the diesel alone, and 1000 litres will last for three or four days of manure spreading. Hofer says that, although she’s pleased farmers like George Heinzle are happy with their fuelling results, she believes there is still greater potential for selling the oil.

Marketing made easy
In Chesterville, Ontario, Dave Chambers has had three good years with his extruder. As a cash crop farmer, Chambers started off much more interested in the oil being produced by the soybean press than by the meal. But by processing neighbouring dairy farmers’ soybeans for their own feed, Chambers is able to market their unwanted oil with his own and produce consistently large volumes. Chambers says his neighbours could start running their own presses but their current arrangement is pretty mutually beneficial, even with the processing fee he charges.

“They tell me how much they feed and then I make the feed as fresh as I can for when they come,” says Chambers. “The press will do much more than they need [individually] and they can still save money by using their own beans.”
When he first got started, Chambers had to find his own market to sell oil to and was able to find a buyer in Montreal. But now he sells back to Energrow. Hofer says this is a service Energrow started to offer this past April after receiving feedback from some customers that they simply didn’t have the time to farm, process the beans, and market them. So Hofer sought out two mills that were interested in a steady supply of oil for their feed products and has been offering contracts to customers who are prepared to provide set volumes at regular intervals. As with any new program, Hofer says, there are still some kinks to sort out, but the company has been pleased with the program so far.

The next thing she hopes to do for her clients is to help them access more high-value markets. As a livestock feed additive, extruded soy oil might only be worth $0.80/L but some of her customers have sold oil, for example, as concrete forming spray for $1.30/L. Hofer says it seems she learns about another new use from almost every client she has. She is particularly interested in the possibility of producing the oil for human consumption.

“We’d really like to see the oil go out and get more value in the food chain, so we’re working with CFIA and the district health unit at the moment to set up a process to do that,” she says. “I think that if the cash crop guys can get paid more for the oil, it makes it that much more worthwhile to press.”

Because research shows cold pressed soy oil contains vitamin E, Hofer says they know it will have an extended shelf life and maintain its original flavour longer when used for things like deep frying. Perhaps there may even be marketable health traits. If she’s successful in getting farm pressed oil to the food market though, who knows, one day soon farmers really might sell their vegetable oil at roadside stands after all.