A three-year study examined the effects of late applications of burndown and post-emergence herbicides on soybeans. 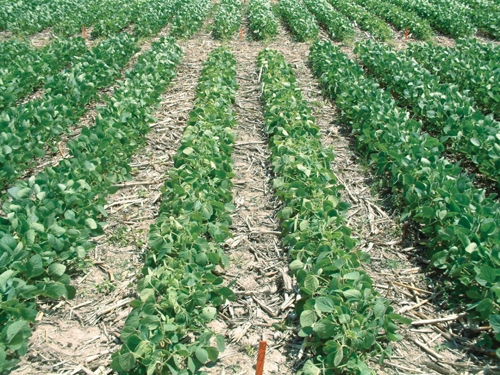 Sikkema’s research shows some leaf burn with late applications of Basagran or Reflex Delays can happen to anyone. Equipment breakdowns

Delays can happen to anyone. Equipment breakdowns, prolonged rainy weather, late flushes of weeds, large acreages that have to be covered in a brief window of time – a range of reasons can push a grower into a late application.

“That’s just the reality of life,” says Dr. Peter Sikkema, a weed management researcher at the University of Guelph’s Ridgetown Campus. That reality prompted Sikkema to lead a three-year study to examine the effects of late applications of burndown and post-emergence herbicides on soybeans.

“We wanted to provide information for Ontario farmers, so if they do need to do a late application, they’ll know which herbicides are going to be the safest and which ones have a greater potential for crop injury and yield loss in soybeans,” he explains.

Sikkema conducted the trials collaboratively with Dr. Rob Nurse, a weed scientist with Agriculture and Agri-Food Canada (AAFC). The trials were carried out at three locations: the Ridgetown Campus’s research stations near Ridgetown and Exeter, Ontario, and AAFC’s research centre near Harrow. Grain Farmers of Ontario and the Agricultural Adaptation Council provided funding for the study.

The herbicides were applied between the fifth trifoliate leaf stage and early flowering. “Controlling weeds after the third trifoliate stage is late in the traditional sense of Dr. Clarence Swanton’s research over 25 years ago showing that the critical weed-free period for soybeans is between the first and third trifoliate stage,” explains Mike Cowbrough, weed management program lead with the Ontario Ministry of Agriculture, Food and Rural Affairs (OMAFRA).

He notes, “Although later herbicide applications may not necessarily provide much of a yield benefit, growers might want to go in late either because the weeds emerged during the critical period and haven’t been controlled, or they are concerned about returning weed seed back to the soil.” Some weed species can produce tens of thousands to hundreds of thousands of seeds per plant, so controlling them before they go to seed can be pretty important.

Sikkema’s research team applied the herbicides at the manufacturer’s highest labelled rate and at twice that rate. He explains, “We do this research at the 1X and 2X rates. The 2X rate simulates a spray overlap in the field. It doesn’t matter how accurate a farmer is, there are going to be some spots in the field where they drive too close or they don’t shut off the boom quite quickly enough when they get to the headland.”

The results of the trials showed the safest options in terms of crop injury and yield loss were Roundup in Roundup Ready soybeans, and Assure for grassy weed control in identity-preserved (IP) soybeans. Sikkema says, “If a grower has grass escapes in his identity-preserved soybeans, I would tell him that Assure is a relatively safe herbicide to use. And if he was growing Roundup Ready soybeans, I would be quite comfortable that, as long as he applied Roundup at label rates, he wouldn’t incur any yield loss.”

Among the six post-emergence broadleaf herbicides for IP soybeans, Basagran and Reflex caused the least amount of visible crop injury. “Although we had leaf burn after application with Basagran or Reflex, that injury tended to be quite transient. The new leaves that developed after application were not affected, and the crop recovered quite quickly,” Sikkema notes.

Classic and FirstRate caused an intermediate level of injury. He says, “We saw injury shortly after application, but the soybeans recovered, and by four weeks after application crop injury was less than 10 per cent.”

Pinnacle and Pursuit were the most injurious. For instance, at four weeks after application, visible crop injury was greater than 10 percent for Pursuit at the double rate and for Pinnacle at the single and double rates. These two herbicides also caused significant stunting of the soybean plants.

So if growers need to do a late herbicide application for broadleaf weed control in IP soybeans, Sikkema advises, “Do not use Pinnacle or Pursuit because they are too injurious and there is potential for yield loss. You could use Classic and FirstRate; you may get some injury shortly after application but in most situations the soybeans will recover and there won’t be any yield impact. The two safest options are Basagran and Reflex, but they are probably not as hard-hitting on the weeds.”

“The labels of these products allow you to apply them in many cases close to flowering. But Peter’s research has identified a couple of products that, when you apply them at that stage as specified on the label, cause reductions in yield,” says Cowbrough.

He adds, “I think this research probably has the most value if you are debating which product to control the spectrum of weeds you have in your field. Let’s say your main targeted weed is pigweed that has escaped in [IP] soybeans. You have three or four different products that you could use, and they are all in relatively the same price range. [With the information from this study] you can steer away from the more injurious products.”

“Our results indicate growers have some flexibility in the timing of burndown in soybeans,” says Sikkema. “For example, where we applied the burndown two weeks before seeding, the yield was 54 bu/ac, and where we applied it one week after seeding, the yield was 53 bu/ac. So we really didn’t see an appreciable effect on soybean yield even with delaying burndown up to one week after seeding.”

Although the trial data showed the yield impacts were small for delaying the burndown up to one week after seeding, that doesn’t mean it’s a great idea to wait until then to do your burndown. Sikkema emphasizes, “My distinct preference is that you apply your burndown before seeding. Even though there is a fair bit of flexibility in terms of when you get it on, for a multitude of reasons it’s really good weed management and good crop management to get that burndown on first, and then plant your soybeans, and then put on whatever in-crop application you need.”

Some of the many reasons it’s better to apply the burndown before seeding are that weeds are easier to control when they’re smaller, and if you control the weeds earlier, they have less time to remove nutrients from the soil. Also, glyphosate needs time to adequately translocate through weed plants, especially perennial weeds, to control them before the crop starts growing.