Keeping a grass forage stand productive is difficult enough, but add in severely saline soils and the challenges are amplified. A three-year research trial at Agriculture and Agri-Food Canada (AAFC) Swift Current Research and Development Centre in Saskatchewan is looking at how a one-time application of nitrogen fertilizer could boost productivity and reduce foxtail barley competition. Preliminary results show it is possible.

“The field had very high salinity. Even though we had been trying for a long time to get something established on this site, the first time we seeded AC Saltlander in 2009, we got an excellent catch. We were absolutely thrilled with the establishment but were reluctant to break it up,” says Ken Wall, a former research technician with AAFC and now an agrologist with Pioneer Co-op in Swift Current.

AC Saltlander is a green wheatgrass developed at AAFC Swift Current, and it has exceptional salinity tolerance. It was established on a severely to very severely saline field near Swift Current in the spring of 2009. Wall says excellent establishment was achieved, and considering the severity of the salinity, the forage yields in 2010 and 2011 were beyond expectations. By 2012, even though moisture continued to be above average, forage yields began to decline. In 2013, yields declined again by almost 50 per cent from the previous year, even though 152 millimetres of precipitation fell during April, May and June.

Walls says because the condition of the forage stand was still rated good to excellent, and at least 90 per cent of the production was still coming from AC Saltlander, fertilization was considered as an option to try to bring productivity back to the stand.

“We considered banding the nitrogen, but decided against it because we had such a good stand. The site was previously pure foxtail barley, and we didn’t want to give it a foothold by disturbing the soil,” Wall says.

In 2014, the plots were harvested on July 9. AC Saltlander and foxtail barley shoot biomass was separated and weighed. Growing conditions were generally favourable with 189 mm (7.6 inches) of precipitation recorded for April, May and June and total precipitation recorded at the AAFC Swift Current meteorological site for 2014 was 456 mm (18.25 in.). The urea applications significantly increased AC Saltlander yield over the control, although there wasn’t a significant difference between the 50 kg and 150 kg rates. Foxtail barley showed no differences in the treatments.

In 2015, differences were noted between the treatments. Only 39 mm (1.5 in.) of rain fell in April, May and June, with most of this received in the last few days of June. Total yearly moisture received was 356 mm (14.25 in.). The trend showed increased AC Saltlander forage production but the only significant difference was between the 150 kg rate and the control.

“We definitely noticed a trend to higher yields in 2015 with nitrogen application. It will be interesting to see what happens in 2016. Into the third year, the 50 kg treatment might be running out of gas since the nitrogen might have been used up in the previous two years,” Wall says. 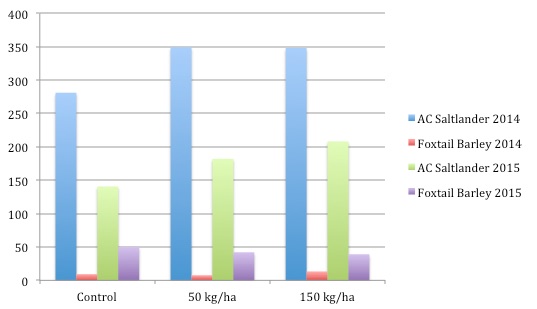 Economic analysis guides decision
Profitability of nitrogen application comes down to the economics of the day. The cost of urea and price of forage varies year to year. Wall crunched the numbers and found commodity prices had a big impact on which rate to apply. Combining the returns from both seasons, the 50 kg/ha rate scored the highest with a return of $637.74/ha ($290/ac.), the 150 kg/ha application return was $626.73 ($285/ac.), while the control treatment returned $525.47/ha ($239/ac.).

“A producer could look at the cost of urea and price of forage and decide on the rate he might want to apply. If urea was low, he might want to consider applying the 150 kg rate. But that is maybe a bit more risky. We’ll see after the third year but a strategy might be more like 50 kg every second year or so,” Wall says.

The research will also conduct a feed analysis, and will assess the soil samples for nitrogen use efficiency. Wall admits that broadcast urea isn’t the best management practice as some nitrogen can be lost to volatilization. He says the urea application was timed with weather forecasts and was applied in anticipation of a significant rainfall that fell the next day.

“We would like to see how a slow-release urea might work and hopefully that can be looked at down the line,” Wall says.

He explains that from these preliminary results, it appears yields can be increased with the addition of nitrogen fertilizer, even on a severely saline site. Whether it is economical to pursue would depend on the price of the fertilizer and the price of the forage produced. If fertilizer prices are high and forage prices are low, it may not be economical to fertilize. On fields where the salinity is high, money for fertilizer may be better spent on a less saline site with the possibility of higher returns. However Wall says it appears the addition of the fertilizer seems to allow the forage to better compete with foxtail barley, which seems ever present on these saline soils. 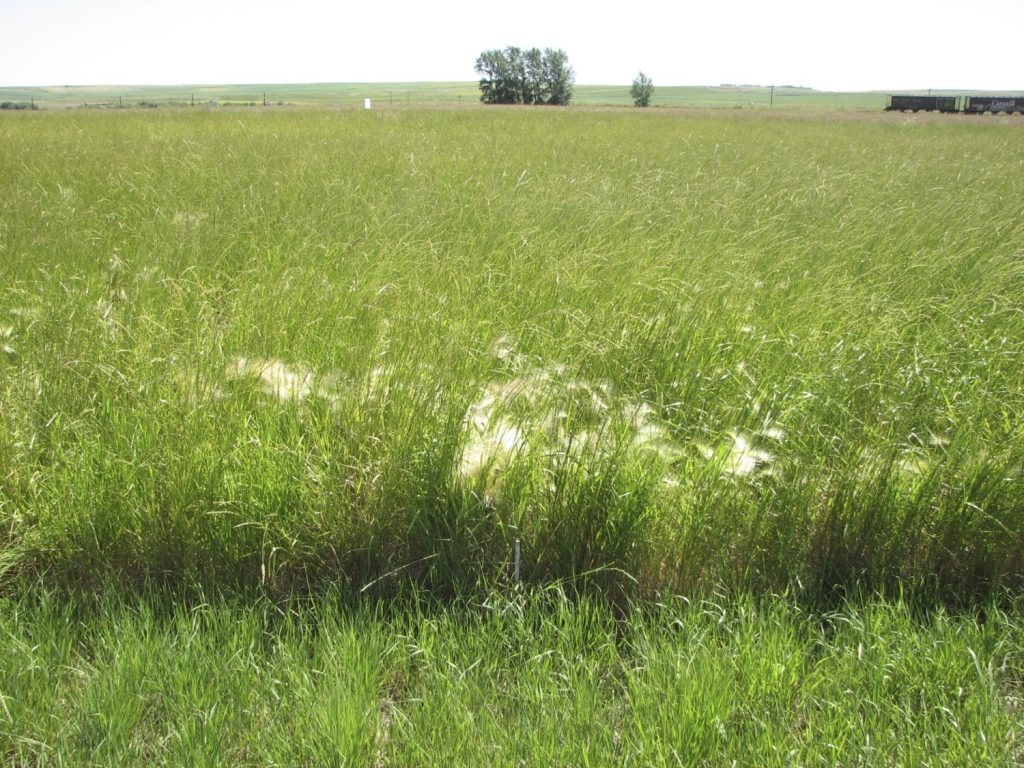 Productivity of AC Saltlander was improved with urea application.