Some Prairie farmers were fortunate enough to have good moisture conditions to band anhydrous ammonia or urea last fall to get a jump on spring seeding. But for the majority of farmers, dry conditions in many parts of the Prairies may mean adjustments to nitrogen (N) applications. 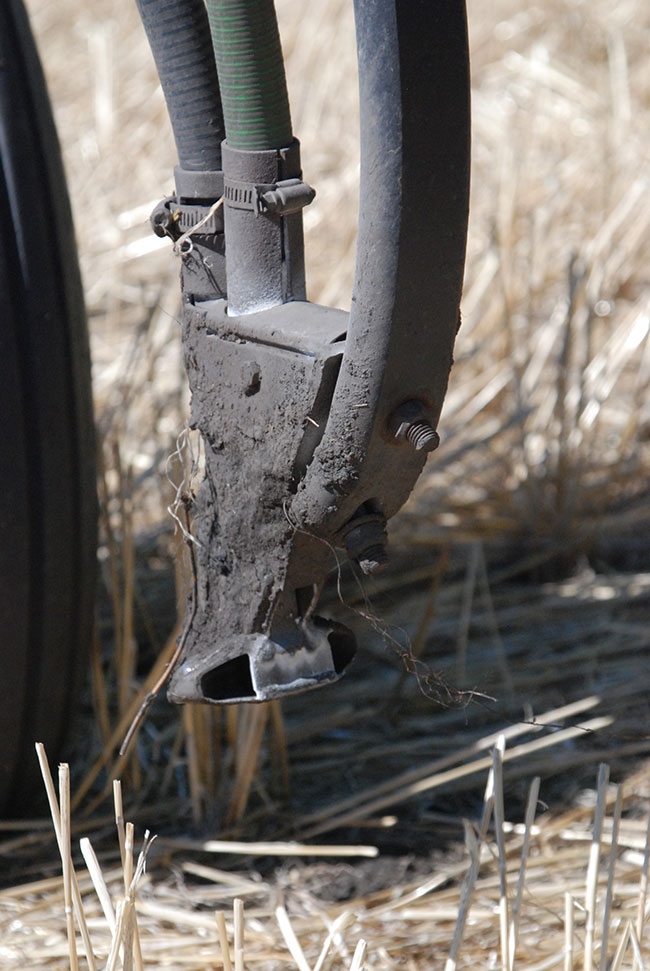 Achieving adequate seed and fertilizer separation is critical in dry soils. Some Prairie farmers were fortunate enough to have good moisture conditions

“A couple [of] good snowfalls and/or an early spring rain would do a lot towards replenishing the subsoil moisture before seeding,” says Saskatchewan Agriculture’s provincial soils specialist Ken Panchuk.

1. Make adjustments to yield targets
Should dry soil moisture conditions persist into the spring, Panchuk says farmers need to re-assess their yield targets and adjust their N application rates based on soil test information. Growers who have been pulling off 70-bushel CWRS wheat crops under the good growing conditions of most of the last decade might want to target a lower yield.  Generally a wheat crop takes up about two pounds of N per bushel. Dropping a yield target down to 50 bushels could mean reducing N rates.

2. Band still better than broadcast
Generally, spring banding of N, either pre-plant or at time of seeding, produces the highest yields. Alberta research found that spring banding is always equal or better than fall banding and up to 20 per cent more effective under dry soil conditions.

Research in Saskatchewan has shown relatively little difference in agronomic performance of nitrogen fertilizer applied as liquid-UAN, anhydrous ammonia or urea at seeding in mid-row or side-band configurations.

“The best strategy is banding fertilizer into the soil. That has become the gold standard in zero-till,” Panchuk says.

All forms of N work well in spring pre-plant banding. Anhydrous ammonia (NH3) should be banded deep enough to prevent application losses, usually about three-to-four inches below the soil surface. However, under strong drying conditions pre-plant banding may potentially delay seedling emergence by disrupting and drying the seedbed.

3. Side-band or mid-row band at seeding
One-pass direct seeding system is the most common practice in Western Canada. Side-band N at seeding often allows application of the entire fertilizer blend in a one-pass operation. However, information from Manitoba Agriculture indicates that placement of fertilizer one-inch beside and one-inch below the seed may not be sufficient for crop safety. Recommendations for crop safety are for a separation of at least two inches from the seedrow for dry or solution fertilizers and two-to-three inches for anhydrous ammonia.

4. Adjust seed-placed fertilizer rates
Should dry seedbed soil conditions persist, Panchuk cautions farmers to cut back on seed-placed fertilizer because the focus should be on getting the crop to emerge quickly and more uniform. The maximum safe rates of seed-placed nitrogen and other fertilizers vary, depending on seedbed utilization of the opener, row spacing, crop, soil texture and moisture. The safe rate recommendations are based on good to excellent seedbed moisture conditions. Follow your provincial safe rates of fertilizer placed with the seed guidelines.

Additionally, surface broadcast urea-N is subject to the risk of volatilization.

Volatilization is the loss of N to the atmosphere as ammonia gas. Urea and urea fraction of UAN solution are subject to volatilization losses, and these losses potentially increase with increasing air and soil temperature, increasing wind speed and duration, dropping humidity and light showers followed by rapid drying. Surface broadcasting when soil and air temperatures are cool and when about a half inch of rainfall is imminent reduces the potential volatilization losses.

6. Protect surface broadcast applications to reduce volatilization losses
To reduce the risk of volatilization, a urease inhibitor can be applied to urea or UAN.  Urease inhibitors slow the conversion of urea to ammonia and ammonium. This provides a greater chance that rainfall will occur and move the N into the soil. In studies by Agriculture and Agri-Food Canada research scientist Cindy Grant (and others) in Manitoba, found that Agrotain (a urease inhibitor) reduced ammonia emission from surface applications. Ammonia losses were higher with urea than UAN because only a portion of the N in the UAN is in the form of urea that is susceptible to volatilization.

Immobilization of N can be high when a portion of the surface broadcast nitrogen in direct contact with crop residues is used by soil microbes to decompose the surface layer of residue, tying up the nitrogen, making it temporarily unavailable to the crop. Panchuk says some of the immobilized N will become available (mineralized) later in the growing season, some over the next few years and a portion will remain a component of the soil organic matter complexes for many years. Banding N into the soil minimizes N contact with crop residues for a period of time thus greatly reducing the immobilization risk especially during peak crop demand for N.

7. New research reinforces spring banding
At the University of Manitoba, soil scientist Mario Tenuta revisited nitrogen efficiency guidelines from 2014 through 2016 to see if spring banding into the soil was still the most efficient option given the enhanced efficiency fertilizers available today. Urea was surface broadcast in the fall or spring at 70 and 100 per cent of recommended N. Urea was also applied with Agrotain and as SuperU. Spring application also included shallow-banded one inch deep, and deep-banded three inches deep.

Tenuta reported that fall subsurface banding of granular urea improves yields compared to surface application, and is much less efficient than spring application. While the enhanced efficiency fertilizers did reduce N2O and NH3 loses, there was no benefit to yield in this ongoing study.

8. Split applications
As a risk management tool, applying a portion of N requirements in a side or midrow-band at seeding followed up with a post-emergent N application is an option. For example, in trials from 2004 through 2006 at Indian Head, Sask., research scientist Guy Lafond found that a minimum of 67 per cent of target N rate should be applied at seeding of canola. If favourable rainfall occurs after seeding, the balance could be applied as a dribble band of liquid UAN or injected with coulters between the seedrow. The second application should be made within the three-to-four weeks after crop emergence to match the peak uptake period for nitrogen.

Adding a urease inhibitor to UAN and timing the dribble band application with forecast rain will help reduce N volatilization losses. Broadcast urea treated with a urease inhibitor is another option, providing the crop is not too far advanced.

“Seeding equipment flexibility plus several options for managing N needs are available to farmers to best match the seeding conditions going into the spring,” Panchuk says.

“Hopefully we get some good snowfalls and/or early spring rain to help reduce some of the risk.”