Scharf believes although the technology’s ability to calculate optimal N rates is not perfect, it is closer to being correct than producer-chosen rates, leading to input savings and better yields. In one study, he and his colleagues found that sensor use saved an average of 14 lb of N per acre and increased yield by two bushels per acre in corn in over 55 on-farm trials. “The amount of nitrogen your soil contributes to your crop varies widely across most fields and depends on the weather,” he says. “I haven’t found any better way to manage this variability.”

The obstacles that remain in perfecting the Greenseeker (GS) are numerous, but Scharf says great progress is being made. “For example, there is not yet wide agreement on the best approach or best equation for translating sensor measurements to N rates,” he notes. “In addition, sensor values can drift during the day, and skips in plant stands interfere with the technology’s ability to produce an accurate N rate.”

Also, some systems that apply N in a liquid form (UAN and anhydrous ammonia) have a limited range of N rates, unless specially equipped. The use of GS also requires the added task of applying high-N reference areas to a farm.

Nicole Rabe, a land resource specialist with the Ontario Ministry of Agriculture, Food and Rural Affairs (OMAFRA), believes there is merit in a technology with the potential to apply the right rate of N at the right time during the growing season, offering both economic benefits (potential input savings or yield gain) and environmental benefits (N being fully utilized by the crop when required).

“However, each field has its own management history and the opportunities to manage N successfully on one field do not necessarily translate to the same opportunities on the next field,” she explains. “It is important growers test any new technology up against their normal practices in a given year, and with GS, to ask the correct questions about the algorithms being presented.”

Rabe says each one has been designed for a specific U.S. state and climate, with some built for specific types of soils. Careful attention should therefore be paid to the input requirements for each one.

More Greenseeker insight
Hensall District Co-operative (HDC) owns two GS units and is buying a third in order to continue studies of the technology in 2015. In 2014, staff looked at its use with variable rate N application in 65 fields of corn. “We view Greenseeker as a late-season N applicator that minimizes N loss,” Steve Redmond, HDC precision agriculture specialist says. “The technology is 20 years old and well-proven in terms of supporting the 4R concept of N management: right source, right rate, right time, right place.”

With the acknowledgement that each year is different, HDC’s 2014 GS studies showed a range of yield advantage in corn, from 20 bu/ac at the HDC plots in Hensall to no response in other fields compared to the farmer’s normal N practice. Factors at work in 2014 include high incidence of northern corn leaf blight and other leaf diseases, late planting and subsequent late preplant N applications, slow release of N from organic matter due to cool, wet soils, and leaching and denitrification of N due to excessive rainfall. For 2015, HDC has planned its GS studies to include additional co-operative members who have manured fields and/or those who apply N preplant or pre-emergence. Redmond says they expect sales of Greenseeker to increase over last year.

Practical Precision in Tavistock, Ont. also expects GS sales to increase this year compared to 2014. They have so far sold 20 units across Ontario, Quebec and the Maritimes, used for tasks ranging from field mapping to variable rate N application. “We describe the GS as a way to identify pockets of potential nitrogen sufficiency and deficiency across a field, and only advocate its use in later stages of corn where there is a solid canopy in place,” Paul Raymer, president of Practical Precision and a precision agriculture specialist says. “This gives a fairer chance for more accuracy and is complementary with the theoretical nitrogen needs of the corn at that biological stage and beyond.”

Raymer says the “split” algorithm they use is solid, adding his GS customers are generally saving on N and increasing their corn yield. “The GS is an economic and environmental success story,” he notes. “Can it be better? Absolutely. If we had a wish list for improving the algorithms, it would be to increase the strength of the Ontario Corn Calculator, adding in the price of N and corn.”

Raymer believes it would not be worthwhile to create a “confident” Ontario GS algorithm if it takes three or four years. “Technology in general is changing too fast,” he says. “Going forward, outside of algorithms, we are working to take the technology accuracy to the next level, interfacing soil properties, variable rate seeding and hybrid characteristics, all of which can influence nitrogen requirements.”
In terms of OMAFRA testing of GS algorithms for Ontario growers, it has really just begun.

“We have done some small-scale tests and we can’t do this work without industry partners like Steve and Paul in terms of helping us get the fieldwork done and the validation plots put in,” Rabe says. 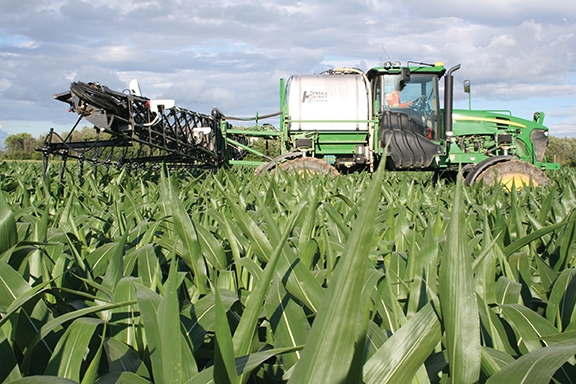