Lygus bugs are a serious pest in canola crops, as well as some pulses and legumes. The current economic thresholds for lygus were developed in the late 1980s and validated later for older conventional canola varieties. Researchers are testing and updating these thresholds to reflect climatic and environmental conditions specific to Alberta, the differences in insect biology across the province, and newer, higher yielding hybrid
canola varieties.

“We are repeating the earlier threshold studies done in the late 1980s in Winnipeg [Manitoba] using a similar research design and cages, and similar densities of lygus, to re-evaluate economic thresholds,” he says.

Newer hybrid herbicide-tolerant canola varieties are more vigorous and much higher yielding than the older conventional varieties. Earlier varieties such as Westar averaged 20 bu/ac, while newer varieties average more than twice that level in many areas. Researchers expect the newer, more vigorous and higher yielding varieties can possibly tolerate lygus feeding better and the threshold can be adjusted accordingly. As well, there are different species of lygus in Alberta as compared to Manitoba, and the species differ between the southern and northern parts of the province.

In this four-year study initiated in 2012, researchers are conducting related studies in Lethbridge, Lacombe and Beaverlodge, Alta., each slightly different based on local differences. “In Lacombe, researchers are comparing two different species of lygus and two canola cultivars, Westar and L150,” Cárcamo explains.

Plots include cages with lygus at four, 20, 40 and 80 per cage, and a control without lygus to quantify the damage and economic threshold. In a related study in Beaverlodge, researchers are comparing three cultivars, Westar, L150 and an RR hybrid, and including cages with and without lygus added at the late bud stage. “In northern Alberta, there is only one generation of lygus, but the main concern is with their arrival in the fields at bolting to just prior to flower, and the impact on flowering and pod set,” Cárcamo says.

In Lethbridge, researchers are using only one canola variety, L150, but have added cabbage seedpod weevil (csw) comparisons as well to help derive a more scientific threshold for csw at the same time as update the lygus threshold. In southern Alberta, there are two and sometimes up to three generations of lygus. Plot treatments for lygus include zero, four, 20, 50 or 80 lygus per cage. In another treatment, cages with 20 csw and 40 csw are being compared. To better understand the impact of a moderate level of lygus and weevils combined in the same field, another treatment is comparing 10 csw and 10 lygus per cage to a control with no insects.

After three years of the study with different growing conditions, researchers are learning more about the impacts of lygus on crops. “The first two years of the study had very different growing conditions, with 2012 being a poor year for canola yields,” Cárcamo says. “The 2012 summer was too hot, the heat blast impacted yields, and dry conditions favoured lygus which also caused a lot of damage to yield. However, 2013 was quite the opposite, with very good yields across the Prairies. And the better moisture conditions appeared to reduce the impact by lygus on yields. It confirmed earlier research that shows rainfall during the flowering and pod setting is important for canola, and if the rainfall is strong in a short period, it can be very instrumental in reducing the impact of lygus.”

In 2014, yields across the Prairies were more average and lower than in 2013. Although lygus counts have not been finalized, it looked like numbers were lower in 2014 than in 2012. The project will continue for one more year, and results will be available after the 2015 crop season.

“These differences in growing conditions and weather each year emphasize the importance of having at least four years of data to compare, to get a better understanding of the overall impacts on yields, insect densities and economic thresholds,” Cárcamo says. “For now, growers should continue to use a basic general threshold of one lygus per sweep at the end of flower and two lygus per sweep at the mid pod stage, the stages when the most economic impact occurs. Some growers are going to a much higher threshold of five lygus per sweep within two weeks of swathing, when the plants are better able to tolerate the insects.”

Crop health also impacts the economic threshold. Although there is no threshold for the bud stage, if the crop is under fairly severe moisture stress and lygus feeding is clearly preventing flowering (sap should be visible on the buds where lygus have punctured them), an insecticide application may be warranted to protect canola yield. Under good growing conditions, canola can grow through this early damage without any yield loss. Crops that are healthy and not under stress can usually withstand low levels of infestation at the end of flowering and early pod stages. At higher feeding pressures, it is possible that a healthy vigorous crop may compensate for higher feeding pressures, and that only poorer crops may need control at threshold levels of lygus.

“At the end of 2015, we will be reviewing our results and determining how these new cultivars are coping with lygus bugs across Alberta,” Cárcamo says. “We hope it is a positive story, but we won’t know for sure until all of the data is collected and analyzed.

We expect to be able to update the economic thresholds for lygus, which will give canola growers a much more accurate way of knowing whether insecticide spraying is warranted,” he adds. “This will help them to reduce application frequency and input costs and continue to protect product and environmental sustainability.” 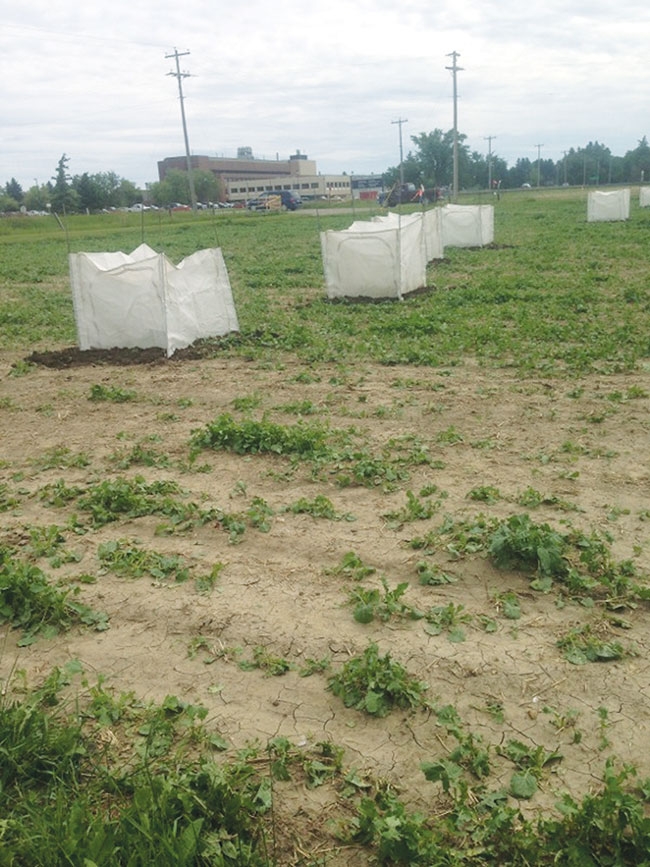