To spray or not to spray? That is the question that crop producers ask themselves each growing season. While economic thresholds can help, deciding how to deal with insect infestations is not always as simple as counting the bugs in a crop.

Other economic thresholds are presented in a table that includes a range of crop prices, spraying costs and insect populations. Though such thresholds are more complete, there are other factors that producers need to keep in mind.

“There have been no re-evaluations of economic thresholds for a number of years, yet we have really changed the crop a lot,” says Dr. Lloyd Dosdall of the University of Alberta. Hybrid canola’s response to root maggots is one example, Dosdall explains. “I’ve personally observed quite a difference in how this different crop responds to these insects. It can compensate much better for attack by these insects.”

“Once you start reducing the leaf area and leaf matter of a crop, that will certainly have an impact on some of the economic threshold that had previously been developed,” says John Gavloski, entomologist with Manitoba Agriculture, Food and Rural Initiatives. Gavloski explains that insects that feed on leaves may damage semi-leafless pea varieties more than older varieties with more leaves.

Producers also need to know that economic thresholds are usually based on plants growing under normal or good conditions. Plants under stress can’t compensate for insect damage as well as plants growing under favourable conditions.  A few economic thresholds do adjust for adverse growing conditions, such as drought stress, but most do not. If a crop is under severe stress, producers need to use their own judgment.

Another limitation of economic thresholds is that they only take into account damage done by a single insect species. While scouting, producers should try to get a rough idea of all the pest populations. If there are two or three different pests just below their individual economic thresholds, and they can all be treated effectively with a single insecticide, it may be worth spraying.

Consider beneficial insects as well
Beneficial insects can control pest populations in some situations. In 2005, there was a major outbreak of diamondback moth in Alberta. “I was getting lots of calls from farmers about spraying and from agrologists. And I was advising them to just hold off if they could, if the crop wasn’t in the pod stage. We’d observed very high numbers of parasitoids everywhere in Alberta. And by the end of the season, it turned out that very few farmers had to spray,”
says Dosdall.

“When you’re out scouting for aphids in cereals or in flax, and you happen to notice there’s a lot of ladybeetle larvae or lacewings, you make a mental note of that. And if you’re borderline threshold, it might affect your decision-making.

We have seen aphid populations decrease substantially when natural enemies are abundant. If you’re well above the threshold for aphids, you really don’t have a means of judging how much that aphid population is going to fall, and I think in that case many farmers will want the aphids controlled if the crop is in a vulnerable stage,” says Gavloski.

“One thing that growers don’t want to underestimate is the ability of the beneficial insects to regulate pest insect populations. Many of the pest insects aren’t a problem annually because they go through these cycles where parasites and predators keep them at these very low levels. And when the predators and parasites aren’t keeping them at those levels, that’s when the pests become economical,” says Gavloski.

Gavloski suggests that producers learn the most common pest species and a few key beneficial insects. Producers can easily mistake benign or beneficial insects for pests, especially on warm days when bugs are more active. “You’ve got lots of different insects doing lots of different things. In some situations, you can go in there, do 10 sweeps, and get a whole netful of insects. But there may be very few that are actually crop pests,” Gavloski says.

Despite the complexity of economic thresholds, Dosdall strongly urges producers to look at thresholds before spraying. “What an economic threshold does is make sure that if a farmer is going to go through the economic cost and the environmental damage of using an insecticidal spray, it will be worth it to his bottom line.” 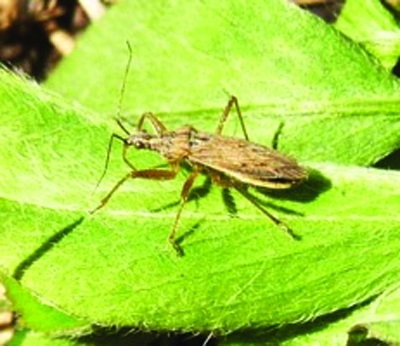 Damsel bugs To spray or not to spray? That is the question that crop producers ask themselves each growing season.