The yield potential of hybrid canola continues to push higher, begging the question of whether economic thresholds for lygus bug developed in the 1990s are still valid today. With more vigorously growing crops, higher yield and relatively high canola prices, new research has found the current economic threshold level of approximately one lygus bug per sweep to be too low.

“Economic thresholds for the early pod stage were developed in Manitoba in the mid-1990s and were based on conventional canola varieties like Westar. However, since then a number of new hybrids, including herbicide-tolerant cultivars with superior agronomic traits, have entered the market and been adopted extensively,” says Héctor Cárcamo, a research scientist with Agriculture and Agri-Food Canada (AAFC) in Lethbridge, Alta.

Cárcamo and colleagues at AAFC Lethbridge, Lacombe and Beaverlodge conducted several research studies from 2012 through 2015 to validate economic thresholds for lygus in southern and central Alberta using a hybrid cultivar. They compared the impact of lygus feeding on current hybrids of canola and a conventional cultivar, and obtained baseline information about lygus in fababeans. The research was funded by the Alberta Canola Producers Commission, Alberta Pulse Growers, Alberta Crop Industry Development Fund and AAFC’s Pest Management Centre.

A multi-site cage study was completed near Lethbridge and Lacombe to assess how lygus affects yield in canola for current cultivars and to refine thresholds. The cultivar L150 was planted at both locations. One-meter square cages (1.2 and 1.5 m tall, at Lethbridge and Lacombe, respectively) were used to confine 75 plants. The treatments included an uncaged area, and caged densities of zero, four, 10, 20, 50 (40 in Lacombe) and 80 lygus. In year two in Lacombe, an extra treatment was added in each cultivar to compare two lygus species (L. keltoni and L. lineolaris) at a density of 20 bugs per cage. At Lethbridge, the treatments included additional treatments with seedpod weevils at 10, 20 and 40 per cage, as well as a combination of 10 lygus and 10 weevils per cage, to assess the joint effects of these two insects at moderate densities below threshold.

Economic threshold increased to two to three lygus per sweep
Cárcamo says the insect additions were successful in establishing a gradient of different lygus densities, and allowed an assessment of yield impact and economic thresholds.

“The outcome of the studies suggests that the current economic threshold of one lygus per sweep at the early pod stage is too low. For Lethbridge, the data suggested that canola yield losses to warrant control did not occur until lygus reached around three lygus per sweep. For the Lacombe region, the threshold was around two per sweep,” says Cárcamo.

A second study was conducted at AAFC Beaverlodge from 2012 to 2015 to look at damage and yield comparisons in three canola varieties from bolting to maturity. InVigor and Roundup Ready hybrids were compared to Westar. Lygus adults were collected by sweep-net from local alfalfa fields and sorted by species. The dominant species of lygus was then used to stock cages at the late rosette stage with 20 adults.

The results for Beaverlodge were less conclusive, but a comparable impact of lygus on canola was observed and a similar threshold could be applied for Lacombe. More site-year data are needed to relate weather to lygus damage, but for Lethbridge, the highest number of lygus per cage (more than 1,000) and extreme yield loss (40 per cent) occurred in July 2012, when temperatures were hot (mean of 20 C) and dry (lowest rainfall relative to other years). In a normal year with sufficient rain – meaning a normal mean temperature below 20 C in July and greater than 120 millimeters of rain in June and July – lygus bugs at low populations of one per sweep did not pose a yield risk.

Cárcamo explains that in a field situation, the yield loss could also be lower because lygus in open fields are subjected to higher predation by natural enemies and also suffer more disturbances from rain and wind, unlike the situation in a cage. This means the estimates of lygus bug damage could be exaggerated and the thresholds could be even higher. Another four-year study funded by the Canola Council of Canada’s Canola Agronomic Research Program (CARP) is underway across the three Prairie provinces to attempt to validate these thresholds in actual commercial canola fields.

Cárcamo says using a higher threshold, even if only slightly higher, may result in a large reduction in pesticide use in canola crops and produce significant cost savings for canola growers. Such a reduction may have other positive repercussions, such as increased activity by pollinators and other natural enemies, which provide beneficial ecosystem services.

“On the other hand, if lygus reach or surpass three per sweep in the south, there are significant economic returns to be realized by spraying because our results, despite high local variability, showed that lygus can reduce canola yield by about 15 per cent in most years in southern Alberta and up to 20 per cent in central Alberta,” Cárcamo says.

Fababean thresholds also evaluated
In fababean there are concerns that lygus feeding can increase necrotic spots, reducing quality and marketability in addition to potential yield. At AAFC Lacombe and Vuaxhall, both in Alberta, a study was conducted to assess the species and crop damage that occurs on fababean from lygus bug feeding. In Lacombe, two to 10 fields of tannin cultivars and six to 11 fields of zero tannin fababeans were surveyed from 2013 through 2015 with sweep nets at the bud, flower and pod stages. In total, 43 fields were sampled. Lygus were identified by species and nymphal stage and total numbers were recorded.

Field and plot studies showed a similar species composition of lygus and activity pattern compared to canola. In most fields, lygus were present at less than one per sweep and rarely two or more per sweep at any crop stage. Cárcamo says further studies are needed to make management recommendations, but as a guideline, farmers may take control action if there are more than two lygus per sweep. He adds farmers should attempt to mitigate any impacts on pollinators and natural enemies of lygus.

“Fababean requires pollinators to improve yield, so it is crucial to mitigate insecticide impacts on them or the action could also affect yields negatively,” Cárcamo says. “Planting early is recommended to avoid the peak of damaging lygus populations that occur late in the growing season.”

Top tip: Sweep net sampling for lygus bug
Take 10 180-degree sweeps with a standard insect net measuring 38 centimeters (15 inches) in diameter, and aim to sweep the canola buds, flowers and pods while moving forward. Count the number of lygus in the net. Sampling several locations in the field and taking more sweeps will provide a better assessment of pest populations. Samples can be taken along or near the field margins. Sample the crop for lygus bugs on a sunny day when the temperature is above 20 C and the crop canopy is dry. 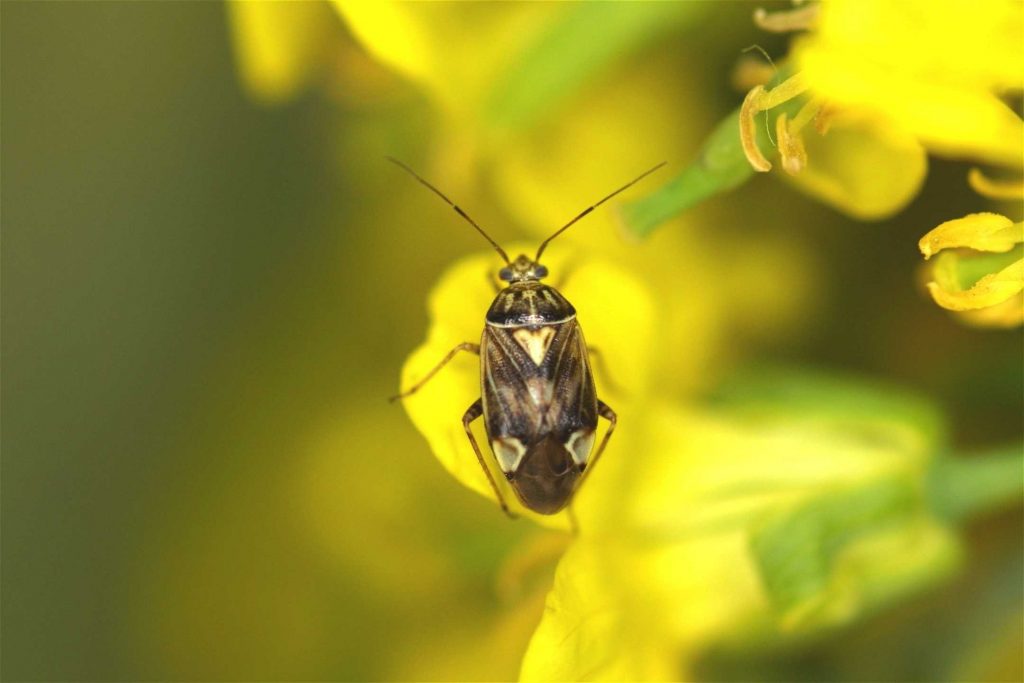 
Related
Lygus bugs still a concern in Manitoba
Check for lygus bugs in Manitoba
WEB EXCLUSIVE: Canola may be as good as barley on moderate saline soils
Wasps may control lygus bugs