Look after your fertility package, use proven agronomics, be skeptical of “special” input products, demand good quality research data and your canola crop will look after you. That’s the message coming out of the Ultimate Canola Challenge (UCC) organized by the Canola Council of Canada (CCC). The UCC was launched in 2013 and repeated in 2014, testing yield increase and return on investment of 13 specialty products and practices.

“The Ultimate Canola Challenge stemmed from the idea that most growers are getting asked to put extra inputs on their canola,” Keith Gabert, a CCC agronomist in central and south Alberta, says. Gabert presented the UCC findings at the Alberta Agronomy Update in Lethbridge in late January.

“You’re really on the hook when we talk about [the cost of] growing canola because you’re already betting like someone who has been to Vegas a few times. We want data to be able to prove it on the farm before we go gambling on additional inputs.”

On top of the serious investment in inputs and fixed costs, Gabert asks where the best place is to invest in the canola crop. In theory, you want to invest in products that will give the best return. Most farmers look for a three-to-one return on an input because weather plays such a critical role.

“On top of reality [weather] not being perfect, some product claims are exaggerated. If it sounds too good to be true, it probably is,” Gabert cautions. “Western Canadian field trials conducted by unbiased researchers is your best source of information. Check out what the research is. How many trials they have, and how close to your farm. Do you think you can duplicate that at home? If the answer is ‘I don’t think I can duplicate what he is talking about,’ you can ignore that, too.”

The UCC research was conducted at nine sites in Alberta, four sites in Saskatchewan and one site in Manitoba. All UCC sites included in the study followed scientific research protocols set out by Neil Harker with Agriculture and Agri-Food Canada in Lacombe, Alta., and by Murray Hartman, oilseed specialist with Alberta Agriculture and Rural Development. Each site had small plots with four replicates. CCC agronomists, along with Harker and Hartman, selected the best management practices (BMP) that served as the check treatment.

“If you don’t have your N [nitrogen], P [phosphorus], K [potassium], and S [sulphur] figured out, and on top of that your seed placement and your fertilizer placement, you might as well not look at fine tuning your agronomy because there are a lot of things you can work out at home first,” Gabert notes. “I’m going to guess that most canola growers still have something better they can do at home, before we start talking about micros or buying the next new variety that is an extra 50 cents per pound.”

The UCC plots had to be on cereal stubble. Each site used one variety for all plots, with the variety chosen for its suitability to the area. The seeding rate was 100 seeds/m2. Fertilizer rate was 100 per cent of soil test recommendation for N, P, K and S. Seeding date was early May. Crop protection was applied as needed. Plant counts were taken at regular intervals through the season. Grain yield, moisture, seed weight, green content and oil content were recorded for each plot.

In 2014, individual co-operators could add another treatment of interest. The standard BMP treatment was developed with aggressive yield targets, not just for an average crop. Basically the question put to the UCC was if there were any profitable inputs that could be added to a good solid agronomy package.

The 13 treatments applied according to protocols were:

Gabert says when considering extra inputs, growers should keep their perspectives simple. Look at the response claims and see if they are based on robust, multi-location, unbiased research. He says to ignore claims based on a function in the plant or based on what the product does within the plant. Look at the probability of response and consider the magnitude of the response.

“Are you chasing a one-half bushel response with a five dollar added cost? Or if you talk to me in February should we just take the money and spend it on nitrogen and just take our chances? Because across your farm, without knowing anything about your operation, chances are I’m just going to spend money on N,” Gabert says.

Prior to the UCC, Gabert says he would have bet on extra N and a higher seeding rate delivering a significant yield increase. The fact that neither did is explained by the sound fertility package and good stand establishment for the standard BMP treatment. He emphasizes if you want to look at increasing canola yield, make sure the macro fertility package is sound.

“Do you need more P? I can’t really answer that. But typically when I talk to growers about their yield expectations, it has grown considerably over the last 10 to 12 years, but their P fertility program has not changed much,” Gabert notes.

Gabert is a big believer in S fertilizer, but cautions soil tests aren’t reliable. “If your soil test says you don’t need S, don’t believe it and put about 15 pounds on. And if your soil test says you do need S, put on about 20 lbs. That’s a little too simple, but I don’t want S to be one of the limiting factors in canola production. At about 30 cents per pound, and at 20 pounds per acre, why would you want it to be the $6 that holds back 60 or 70 bushels of yield?”

Gabert says the take home messages from the UCC should resonate with growers and agronomists. Develop a solid yield target and fertility plan. Research any new input choices. Do your homework. And, leave a couple of check strips and accurately measure results. 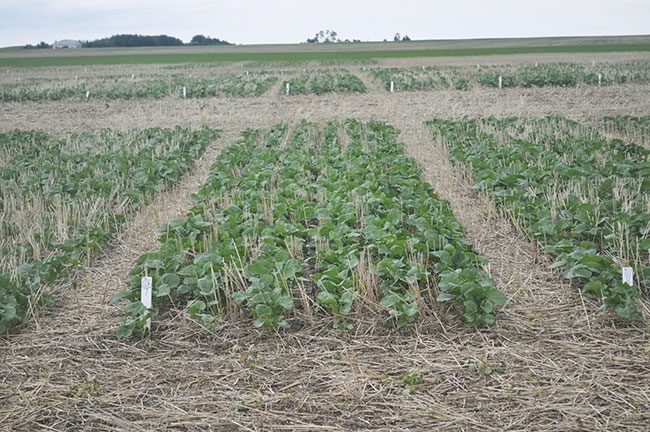 A solid yield target and fertility plan is the best approach for profitable canola. Take care of best management practices and little else matters.